I thought I would start this thread for bits of jobs that don't fit into other major project slots like Kitchen Refurb and other bigger projects.

My offering today was completing the install of Sally's new tomato growing propagator that we have in the back yard. Our old one dropped in bits, (as they do) so we got another one from Aldi. I have to say that it is very good quality and a much better cover than the previous one which we bought from a garden centre. We had built the frame up the other week and it was waiting for me to secure it to the wall so it wont blow away. One fault with all of these small propagators is that there is no inbuilt system for securing it to a wall. To this end I made a couple of aluminium brackets yesterday, similar to an open P clip. Simple enough but OK as you have to secure the unit with the cover installed over the frame. The clamps basically grip the frame and cover and hold it tight to the wall. It only needed one at each side but it will stop it catching the wind which has happened in the past when the unit is empty. and no weight in the bottom to hold it down. Ready to rock now with a triple tomato plant grow bag.

Self powered wireless doorbell fitted, very impressed with the functionality. Hopefully it'll stand the test of time.
The transmitter (bell push) has it's own 'generator' that creates the signal to activate the two receivers, these are plugged into a standard 230v socket at either end of the house.
Kev

My one and a half sink in the kitchen sprang a leak. Went under the sink where we keep the cat food and there was a pool of water in the bottom of the unit!. Traced it to the half bowl waste outlet where the seal had gone under the compression washer for the top plug retainer. Pulled it all in bits and found that the silicon bead had failed along with the fibre washer immediately under the drain top. Went to see Colin at Redmond's but he didn't have anything near the right sized seal, neither did the lads at B&D.

Checked that I had a new tube of clear sealant which I did but couldn't find my mastic gun. Looked in all my toolboxes and the decorating box where I keep the sealant's but can I find it? Nowt for it but a trip to B&Q. All civilised on there you have to take a sanitised trolley even if you just want a washer, it acts as a spacer from other customers. I asked one of the ops if you could get the seals separately but apparently not. You have to buy a full plumbing in kit to get the right bits. So it was, I picked up a new mastic gun and a new reel of PTFE tape. One failing at the store all exits to the tills are closed off bar one. the tiny sign for finding the right temporary exit isle isn't big enough. Anyway all the job lot was less than £8.00 so better than constant waste water ingress to the unit below.

Anyway all the bits cleaned up and any old remnants of sealer, left it to dry off while I did the run to B&Q. Had a bit of lunch and a brew and then set to rebuilding the outlet. Plenty of new sealant and everything bedded down. 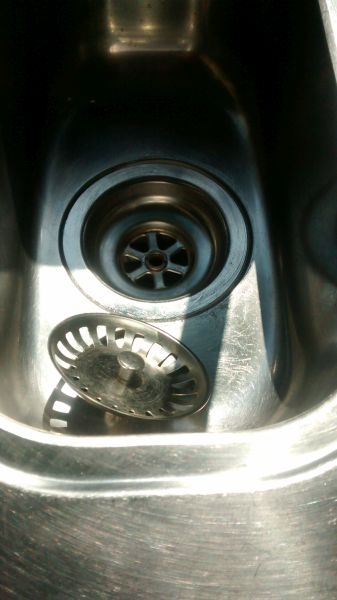 Will have to try and resist using the half sink until the sealant has cured, it's very useful and gets used a lot. I put most of my original bits back as the sink is a 1.5, I may need some of the other stuff for the main bowl in the future. It's eating nowt as they say. 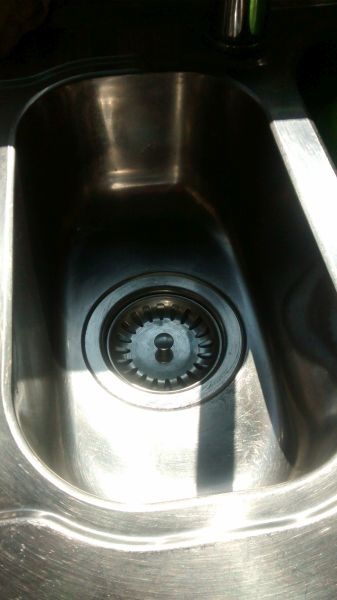 Job done properly for less than 8 quid. Well done. And some spare parts for future use! Hope you've got a treasure chest like Stanley!
Top

Still in its aspiration stage. A hand rail for the big rough steps at the bottom of the garden. Did a rough sketch of the steps yesterday, looked at the website for North Valley Forge for material and picked up all the iron work necessary to make a custom built job today. £115 spent so I'm committed to finishing it sometime. An indoor wet weather job, other than a coat of paint to stop it going rusty that's it until summer arrives.
Top

My treasure chest has PTFE tape and lots of different joint compounds Ian if you ever feel the need.
Stanley Challenger Graham
Stanley's View
scg1936 at talktalk.net