Many of you will remember my daughter Susan going to Australia to nurse her sister Janet though her terminal illness. This took its toll and Susan is climbing out of a very difficult 18 months.
As part of this she has decided to use her qualifications and experience to found a counselling service. See this LINK for her website. If any of you can help spread the word that would be nice.....
Stanley Challenger Graham
Stanley's View
scg1936 at talktalk.net

Wow, a very impressive web site! We wish Susan great success with her venture - it sounds like a brilliant idea.

Thanks Tiz, I've referred her to this topic, she needs all the help she can get!
Stanley Challenger Graham
Stanley's View
scg1936 at talktalk.net

What are her qualifications, Stanley? ( one needs to ask these days)
Top

Here you are Maz straight from the horses mouth. "I have a Diploma in person centred counselling and a certificate in sex and relationship counselling. Total of 5 years training." She was asked the question the other day. Apart from that she has a varied life experience. Like Mark Twain's river pilot she has hit most of the rocks and survived! BTW, she's also a trained nurse with experience of caring for the elderly and terminal care and is very good with people.
Stanley Challenger Graham
Stanley's View
scg1936 at talktalk.net

Neither have I but that's evidently the current term for the sort of services Susan is offering.
Stanley Challenger Graham
Stanley's View
scg1936 at talktalk.net

I reckon one to one fairly well sums it up.
Ian
Top

I watched the video, but didn't realise there was more info underneath it. I've gone back and read that now.
Good luck with it all, Susan.
Top

I'll pass the message on Maz. Thanks for the interest.
Stanley Challenger Graham
Stanley's View
scg1936 at talktalk.net

I wasn't sure where best to post this but here it is! We spent last week at a holiday cottage in Penzance, Cornwall and had lovely weather, great for walking the beaches and cliffs and investigating the lanes, parks, gardens and shops of Penzance. When we go to West Cornwall we usually make at least one visit to Penzance but never have enough time to see it properly. This time we stayed in a cottage in easy walking distance of the town centre and beach. The Lariggan Stream runs down the hill in a valley to reach the sea and the green, tree-filled valley cuts through Penzance. A narrow lane runs down the valley and there's only a couple of houses alongside it, so we were only a short distance from the residential areas but screened off in the very quiet valley. The holiday cottage is the converted stable alongside the old farmhouse whose front door has a granite lintel on which are carved the initials of the man who built it and the year 1675. The lane was so narrow that the car's sensors beeped all the way from the main road to the cottage! 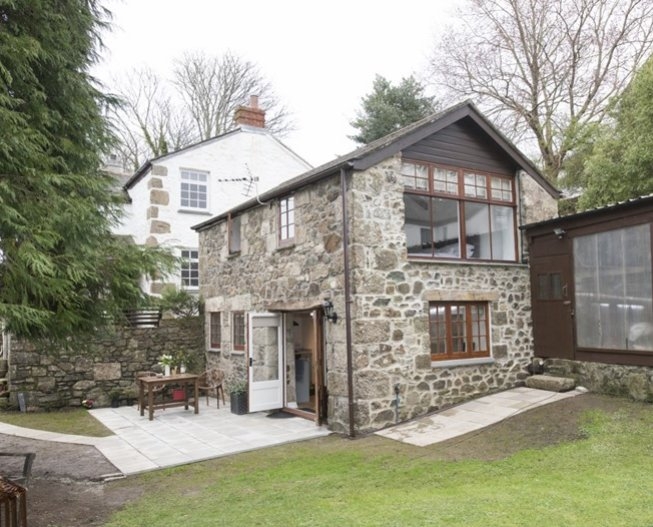 Here is the farmhouse's granite lintel. Note that two inserts of slightly different coloured granite can be seen immediately below the lintel. The owner believes that these were put in at a later date because by then people were taller on average than they were in 1675. 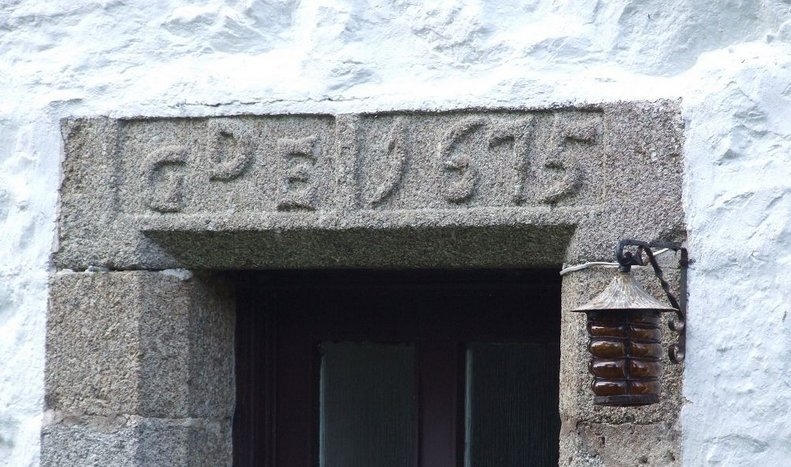 The owner of the house, Robin, came to Cornwall from the Scilly Isles as a child and eventually went to work at Geevor Mine in the 1960s on the engineering side. He soon realised that the miners earned several times as much as he did so he went to the boss and said he wanted to be a miner. The boss said OK, pointed out a Polish miner and said `Go with him'. The miner said `I no want him' but the boss told Robin `Follow him in, watch him and you'll work with him'. So he did - and spent the next 5 years working with him. He soon learnt the reason why the miner `didn't want him' - it was because Robin's wage would come out of the miner's earnings. He described working in the mine, how it was very hot deep down but then H&S meant the company had to create forced draft to eliminate radioactive radon gas and after that it was always too cold!

While in Penzance we saw the finishing touches being made to the restored Lido (Jubilee Pool) at Battery Rocks and it re-opened this weekend. There was a preview for schoolchildren then it was opened to the public. It had been in a bad state after storms a few years ago and the floor of the pool was lifting and had to be re-attached to the rock below. Pipes have been drilled down into the ground and geothermal heat is now used to keep the water at a constant 29 degrees C. Jubilee Pool
Top

Oh! How special is that!?
Love Cornwall. Have been there a few times but our family history doesn't stretch as West as Penzance. ( and with limited time available we have had to concentrate on other areas...and some very pretty spots too.)
What a beautiful holiday accommodation.
Last edited by Marilyn on 30 May 2018, 03:36, edited 1 time in total.
Top

Lovely. I've never been further west than just beyond Exeter and that was a skin yard at a place beginning with 'B'......
Stanley Challenger Graham
Stanley's View
scg1936 at talktalk.net

The gardens in Penzance are full of exotic plants, especially palms. This photo was taken in Penlee gardens which also houses the art gallery showing paintings and photographs by the famous Newlyn artists... 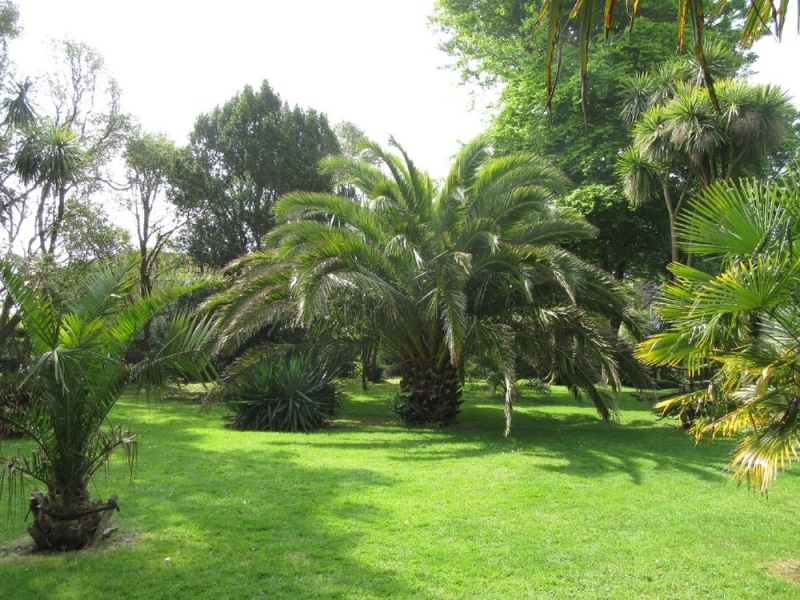 Getting ready for action... 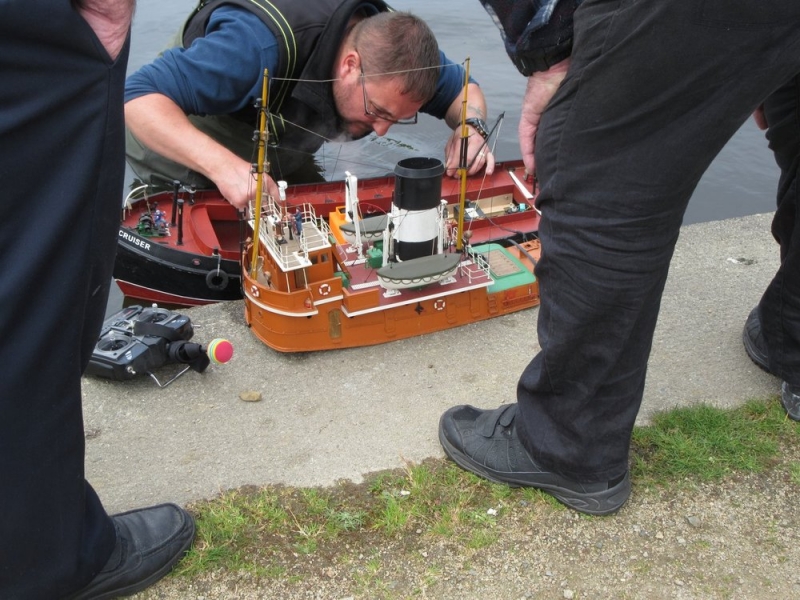 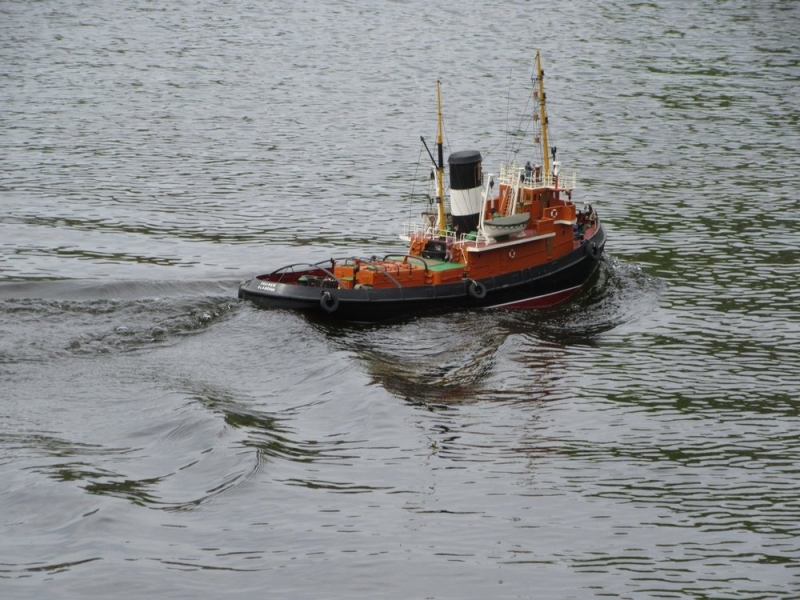 Lovely! And do I detect a hint of steam at the funnel top?
Stanley Challenger Graham
Stanley's View
scg1936 at talktalk.net

The boats are battery propelled and radio controlled, so there's no steam engine unfortunately! But yes, there is a smoke generator in the hull and you are seeing `smoke' wisping from the funnel. They use electric heating of a fluid to generate the `smoke' and the fluid can be a special oil or a mix of glycerol and water. The aqueous mix seems to be preferable and gives denser `smoke' so I suspect the tug might be using oil.

They are keen on model boats in Cornwall, as shown by this web site selling kits: LINK 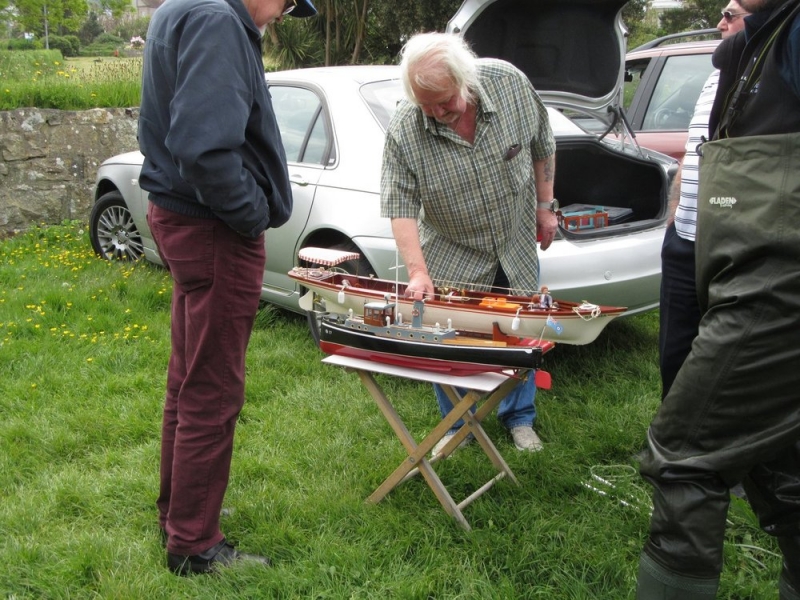 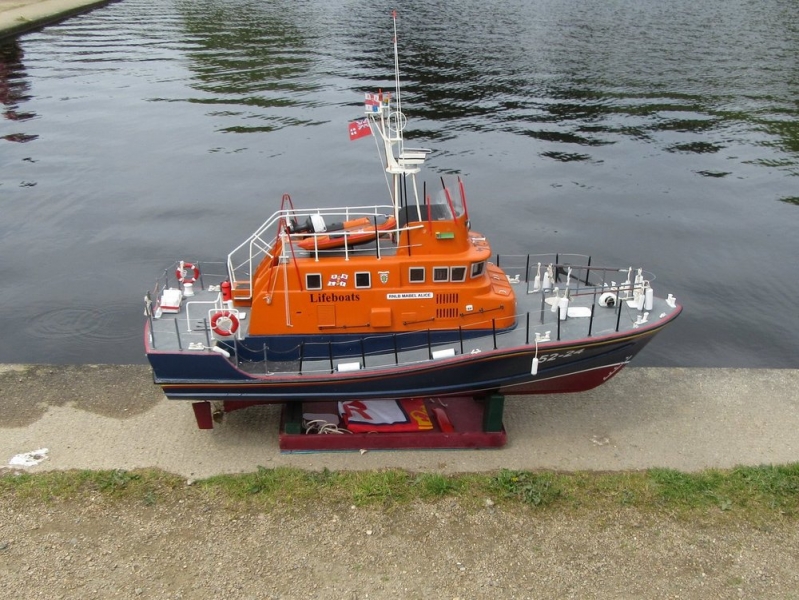 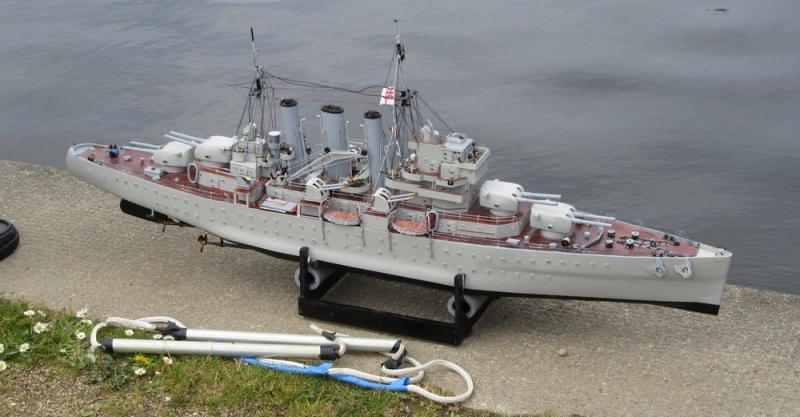 Here's a photo of the Admiral Benbow pub in Penzance, Cornwall, which has a long history and is well-known for its association with pirates. The figure on the roof ridge represents Octavius Lanyon, leader of the Benbow Brandy Men smuggling gang, who is reputed to have fled the customs men by escaping onto the roof of the pub. It has a tunnel leading down to the harbour, made by miners and used by smugglers. 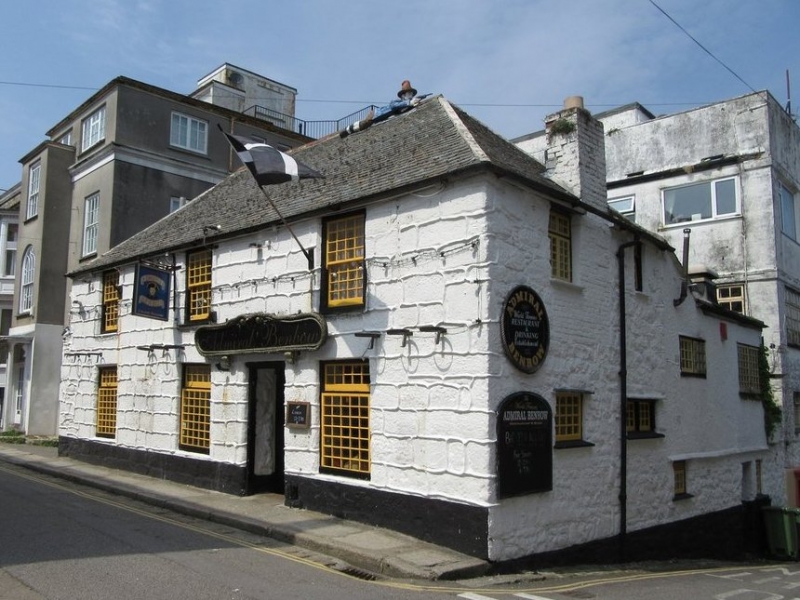 Here is the Methodist Miners' Chapel in St Just near to Land's End. The size of the chapel attests to the strong non-Conformism in Cornwall, especially in this far west region. Many of those graves will be the resting place of former miners. 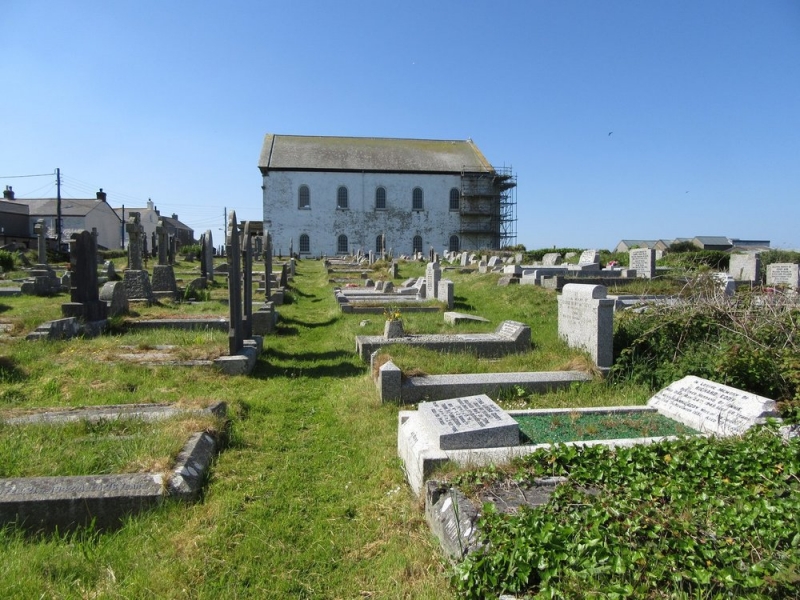 Lovely pics.
Makes me want to go for a wander...
Top

I agree Maz but what strange pointing on the pub!
The boats are superb....
Stanley Challenger Graham
Stanley's View
scg1936 at talktalk.net

The boat men told us they have a `navy day' in Penzance on, I think, the last weekend in June and people bring their boats from far and wide. I couldn't find anything about it on the web, though.

Sailors would, not surprisingly, spend a lot of time and money in pubs like the Benbow when they were in port. According to a book written by a Penzance sailor, in the old days when the sailors left the pub at night they'd go to a house where they could sleep off the booze. Instead of beds there were ropes hung across the room. The landlady would hang the men over the ropes for the night. In the morning she came in and wakened the men by simply untying the ropes and letting them drop on the floor! (The man who wrote the book should know - he's one of the Carter family whose notorious ancestors smuggled at Prussia Cove).
Top

I believe in Liverpool it was 1d to lie down full length but only 1/2d for a half sitting position. Hence the term 'to sleep on a clothes line'.
Top

I first read of this practice in George Orwell's 'Down and out in Paris and London'.

Sleep on a clothes line

It sounds as if it was a lot more widespread than just London - or is there perhaps just a touch of the 'urban myth' about it all.

There you go I thought it was in 'Road to Wigan Pier'. My machine wouldn't let me into your Link. Try this Link 2
Top