The Ascension Islanders are saying no, so beware if you live in the Isle of Wight!

There are more reports cropping up of people who voted for Trump last time saying they won't vote for him this time. They are the ones who didn't necessarily like Trump but didn't want Hilary or wanted to `make a statement' or just thought they'd have a change etc Trump has also made an enemy of the military and the war veterans (saying `Anyone who got killed in the war is a sucker' wasn't good for his image). Also the people who thought he'd be OK once he became president but now know what you see is what you get. Let's hope enough of them vote Democrat!

Ah, but now the tack has shifted. See THIS BBC report on the latest moves, to use 'retired' ferries as off-shore processing facilities. In this report they are referring to 'off shore', In other reports Moldova, Papua New Guinea and Morocco are mentioned as locations, even disused oil rigs, off-shore is a weasel term, it could mean mid-North Sea! I agree with Ian and also I listened to a discussion on numbers, was it in More or Less?
I also listened to a discussion about what looks like the retreat of democracy world-wide. (World Service?) I can't possibly summarise it for you, it was complicated but interestingly included the US and the UK in countries where this tendency has been noted. Yesterday's 'agreement' in Parliament about more scrutiny is useless due to the caveats announced by Matt Hancock. In particular, debate and a vote will only kick in when 'national matters' are involved. This raises the question, what exactly is 'national'?
Stanley Challenger Graham
Stanley's View
scg1936 at talktalk.net

We could always bring back the prison ships but call them refugee processing centres.

I don't suspect for one minute that the Tory MPs have been taken in by Hancock's compromises. They have made a rumpus which will be seen as good enough to placate the hospitality industry and give the city business the impression they are on their side. Typical smoke and mirrors to feed the plebs meanwhile Johnson blunders on under instruction from Dom.
Top

I fear you might be right Ken. At the moment none of them want to rock the boat, that will come later when they hit the stormy waters that are coming.
I like the fact that Sir Lindsay stood up and spoke his piece. He is going to be about as hated as Bercow shortly.
Did you hear Useless Eustace dodging round all the pertinent questions this morning? I imagine David simmering as he listens to even more embarrassing ambiguity.
Stanley Challenger Graham
Stanley's View
scg1936 at talktalk.net

Yes, and that episode was excellent...
`'Record' Covid cases, Trump on the death count, and ant pheromones: More or Less'
Daily recorded coronavirus cases in the UK have hit record levels; we explain why that’s not as bad news as it sounds. We hear a mathematical answer to the problem of Covid-19 testing capacity. How can we assess a country’s capacity to take refugees? US president Donald Trump has said that just six per cent of people who were reported to have died from Covid in the US actually died from the disease. Could he be right? (No.) Plus: what ant pheromones can teach you about your life decisions. LINK
-------------------------------------------------

These Facebook ads wouldn't surprise me if it were not that they are put out by Trump's official re-election campaign...
`Trump ads push baseless Biden earpiece conspiracy' LINK
`US President Donald Trump's re-election campaign is running hundreds of Facebook advertisements pushing an unfounded conspiracy theory that Joe Biden cheated during the first US presidential debate. The adverts show the Democratic Party challenger with an earpiece, and say that he refused to have his ears checked for devices prior to the debate. The Biden campaign rejected the claims.'
Nullius in verba: On the word of no one (Motto of the Royal Society)
Top

Don't expect anything but more examples like that of Trump's ruthless and devious approach to this election Peter. Biden can only keep reiterating the truth, that commodity is not available to The Donald so he is forced to lie. All we can hope is that the US voters realise this. If they don't it will be the biggest democratic and Constitutional disaster in US history.
Ursula Gertrud von der Leyen has announced that the EU is taking us to court because of the illegal clauses we have adopted in the Withdrawal Agreement. No surprise there, that is what they said they would do. Brilliant negotiating strategy.
Stanley Challenger Graham
Stanley's View
scg1936 at talktalk.net

To Hell on a handcart comes to mind and it's Boris and Dom that are driving it. Economy will be stuffed for years.

And if Trump gets in again the world will be stuffed for years - there might be a new flood of migrants into Europe, this time from the US!
Nullius in verba: On the word of no one (Motto of the Royal Society)
Top

I know of two in Somerset who have already voted with their feet.
Later. See THIS earlier BBC report that Trump has been tested for Covid19. It's just been announced that he and his wife are both positive and are isolating for 14 days. Expect a twitter storm unless he becomes seriously unwell.
Stanley Challenger Graham
Stanley's View
scg1936 at talktalk.net

Perhaps it's turned him soft because he's now put this out...
`Trump condemns all white supremacists after Proud Boys row' LINK

Having said that men who were wounded or killed in war were sucker and losers I wonder if he'll now admit that he's one of those?

Let's hope Trump didn't infect Biden during the heated debate.
Nullius in verba: On the word of no one (Motto of the Royal Society)
Top

He is prime fodder for the virus and he is in the extreme risk category. He wont take orders or be told what to do but that's alright because is no worse than the common cold.

I enjoyed BBC's US correspondent John Sopel this morning on Today saying Trump is vulnerable not only because he's in the `old' group but he's in the `obese' group too.

I watch the Trump situation with interest. 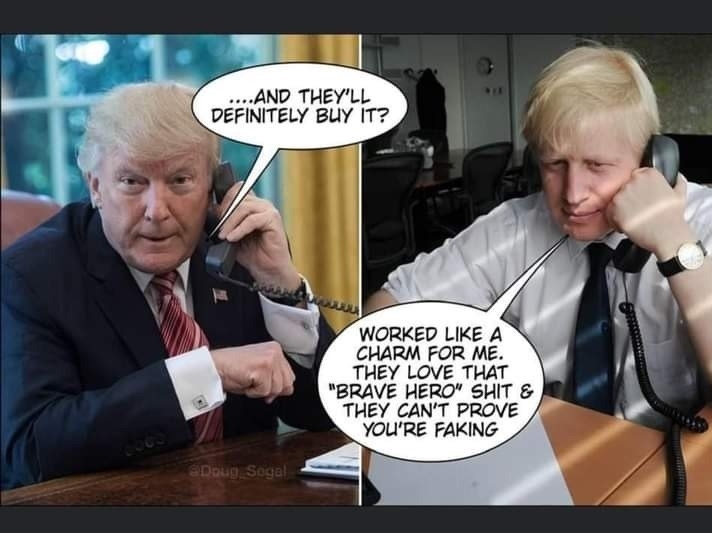 Did you see this posted by Ian?

Meanwhile here I see Priti is in a spat with the Home Office about them briefing against her by leaking the possible locations of immigrant facilities. Not a comfortable or productive situation. Once again she is the subject of universal criticism from within her own ranks.
Later at 05:30. The Trump situation is moving fast. Despite the fact that the White House has it's own state of the art medical centre, The Donald has been transferred to Walter Reed Memorial Hospital where he is being bombarded with a cocktail of remedies, some of them of long standing but some experimental antibody treatments. The White house says that these are 'precautionary measures'. Add to this parallel reports that 'there is a raft of positive tests in the West Wing' and some commentators are questioning just how serious Trump's condition is. It may not be long before we have more accurate information, things could move very fast.
See THIS BBC report.
Stanley Challenger Graham
Stanley's View
scg1936 at talktalk.net

The most likely person to have infected Trump is his PR exec/advisor Hope Hicks who had already tested positive. She's pretty and he likes getting up close to her. Melania's probably already telling him he spent too much time with her. Here they are... 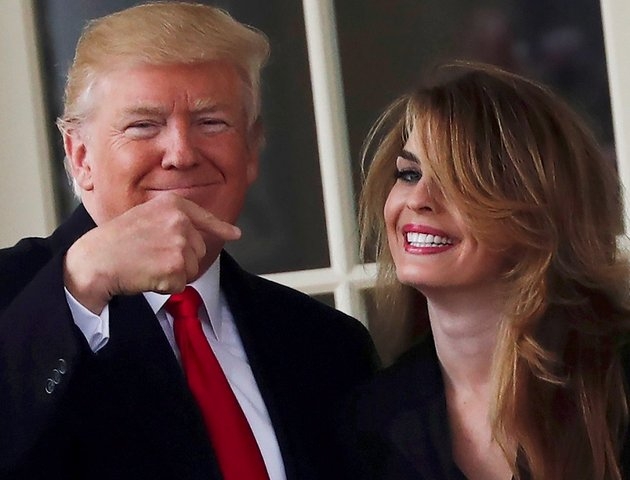 I hope Trump recovers fully and quickly. I want to see him beaten fairly and squarely by the Democrats.

Trump's covid-19 condition is now becoming very serious. As president of the US he is in a position to press the nuclear button. Two questions need to be addressed...
(1) What happens if he becomes totally irrational and starts acting strangely and saying things that nobody can believe?
(2) How will anybody know?
Top

I've only just woken up from my second sleep and am not up with the news. That doesn't matter as we have our own hospitalisation at the moment. A close family member has had some sort of heart event and has been taken to Blackpool. Not life threatening but that's taking up all my attention! So bugger Trump and fingers crossed for my patient.
Stanley Challenger Graham
Stanley's View
scg1936 at talktalk.net

I hope they are OK Stanley.
Ian
Top

No news is good news Ian. I shall get an update later on.
Stanley Challenger Graham
Stanley's View
scg1936 at talktalk.net

Just been listening to Therese Coffey reassuring us that the 16,000 missing traces is just a glitch. Also that the economy is opening up and most venues are open... etc. etc. In other words another 'keep the plebs quiet' interview. I get so fed up with hearing these slick but useless communications.
Stanley Challenger Graham
Stanley's View
scg1936 at talktalk.net

Trump bullying again...
`Trump continues Biden attack ads on Facebook' LINK
Nullius in verba: On the word of no one (Motto of the Royal Society)
Top

You've all seen Trump clowning about making his Covid a TV spectacle. Now we have Boris promising us the new Jerusalem. Take your pick as to where you direct your scepticism and anger. I am having a problem deciding...
Stanley Challenger Graham
Stanley's View
scg1936 at talktalk.net

Didn't catch it all, but what I heard was probably written by Dominic Cummings and the (green) First Floosie.

Does he really think the whole country can manage on windmills? That's what he seems to be saying. Even James O'Brien on LBC (one of the most intelligent men on the planet - he'll tell you himself) seemed to be surprised to hear that what's generated has to used immediately. Not good for windless anti cyclonic freezing cold winter days.

Similarly I saw this place recently Babcock Ranch Their solar panel farm is impressive, and it was implied that they were self sufficient in energy, but they didn't explain how the air conditioning was sustained during those hot dark Florida nights.

Born to be mild. . .
Preferred pronouns - Thou, Thee, Thy, Thine
Top

That's no problem. Mr Musk and Mr Dyson will develop marvellous batteries and sell them to us at an astronomical price.

In the case of Dyson it will probably be a digital battery.

And very small.
All the comment in the US is about how soon Trump will be campaigning, not the fact he's an infection risk.
As Johnson says, we have to get our priorities right and stop thinking about tomorrow. Politics is already running on wind power.
Stanley Challenger Graham
Stanley's View
scg1936 at talktalk.net