I received the replacement rear airbeam for the tent yesterday, here it is: 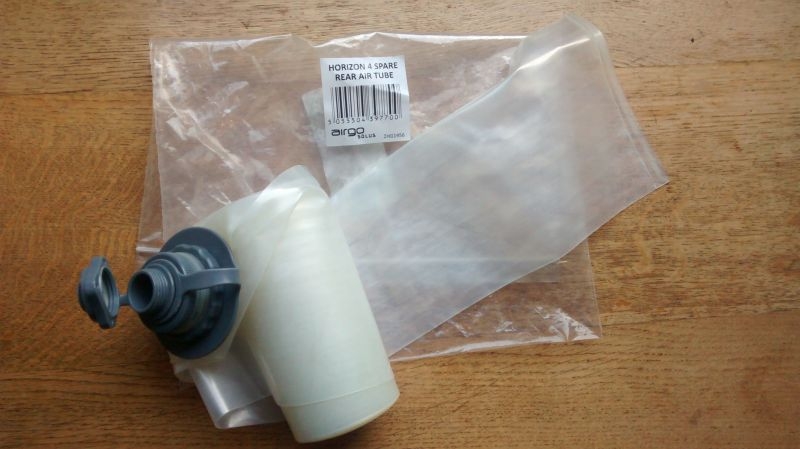 It's rolled up here apart from the end with the valve assembly and made from a high grade polythene. When installed this is encapsulated in a heavy ripstop nylon tube which is zipped along about 90% of its length to allow installation. The assembled beam is itself captivated in a sewn in channel of the outer flysheet canopy making it an integral part of the tent. The valve assembly has three stages, the bottom ring is what secures it through a stitched in port through the flysheet, the second level of the valve can be unscrewed for deflation, the one way valve itself is in the third stage and has a sealing screw cap, you unscrew this to inflate the beam. All of the stages of the the valve have integral safety loops so you cant loose any of the parts when you unscrew them. The pump for the beams has an automatic bypass valve that limits the pressure to 7psi
Ian
Top

Makes our ex WD 'two man bivvies' in the 1940s look antediluvian! Wooden tent poles in sections with brass ferrules, a spike on top of the pole which engaged in a sewn grommet at the peak and string guy ropes. The tent material was heavy green canvas duck that took ages to dry. I remember that in heavy rain when they sprang a leak the trick was to run your finger down the inside so it dripped on the grass. The groundsheet was separate and smaller than the tent. I'll bet they were using the same construction in the Crimean War!
Stanley Challenger Graham
Stanley's View
scg1936 at talktalk.net

The rear beam change will have to wait. We have made the executive decision now the tent is dry to pack all the gear away until Spring. The change in the weather and notwithstanding the Covid restrictions have put paid to an early Autumn trip out. We will see what it looks like in Spring. We have most of our ancillary stuff in plastic boxes with lids which makes packing and storage a lot easier. We have moved all our camping gear out of the landing cupboard and now keep it in the small spare bedroom, more room to move about in there. I have all our boxes sorted and upstairs, just the tent to go now and a few items still in the top box on the car. These are mostly flat stuff, table, camp kitchen, stove etc. I will take the top box off and the roof bars and they will go up there on the first fine day which we may get with a bit of luck tomorrow or over weekend.
Ian
Top

Yesterday was bob on for emptying the roof box and getting it off the car. Bars have gone upstairs, box is waiting until we have stacked and stored all the other stuff properly. I have kept our can of waterproofing spray out as one of Sally's kagouls needs a treatment.
Ian
Top
Post Reply
80 posts