Sunday the 27th January is Holocaust Memorial Day and makes sure that people don't forget the victims and survivors of genocide in general. It's especially important now as, once again, we see increasing aggression and intolerance around the world. We are unlikely to see genocide in Britain but we already see the discrimination, racism and hatred that precede it.

The HMD Trust's web site is here: HMD and part of the text of that page follows...

Holocaust Memorial Day Trust (HMDT) encourages remembrance in a world scarred by genocide. We promote and support Holocaust Memorial Day (HMD) – the international day on 27 January to remember the six million Jews murdered during the Holocaust, the millions of people killed under Nazi Persecution and in subsequent genocides in Cambodia, Rwanda, Bosnia and Darfur.

27 January marks the anniversary of the liberation of Auschwitz-Birkenau, the largest Nazi death camp.

The Holocaust threatened the fabric of civilisation, and genocide must still be resisted every day. Our world often feels fragile and vulnerable and we cannot be complacent. Even in the UK, prejudice and the language of hatred must be challenged by us all.

HMD is for everyone. Each year across the UK, thousands of people come together to learn more about the past and take action to create a safer future. We know they learn more, empathise more and do more.

Together we bear witness for those who endured genocide, and honour the survivors and all those whose lives were changed beyond recognition.
Top

Lest we forget.
I know I'm in my own little world, but it's OK... they know me here.

I mentioned on 'Read Any Good Books' ... I shall Bear Witness . Diaries of a Jew 1933 to 1945. What I never realized was the gradual drip drip of regulations on the Jewish population that bought them to starvation levels. They knew people were being taken away to police stations and camps where they just disappeared or were reportedly 'shot while escaping'. The extermination camps were never mentioned simply because nobody ever survived and returned to tell them what was actually going on. Even in relatively 'safe' areas the Jewish population was reduced by 90+% The hardship was hard to believe.
Top

For later genocide, "The Killing Fields" is based on the true life experiences of Sydney Schanberg who worked for the New York Times and his interpreter, journalist, photographer and friend Dith Pran. It tells of Cambodia during the rule of Pol Pot and the Khmer Rouge. A difficult film to watch but should be compulsory in schools if we are to learn from history.
Ian
Top

Even today I find it hard to read the histories of the Holocaust, they affect me so badly. Cathy is right, we should never forget....
Killing Fields is a wonderful film but as you say Ian, a very hard watch.
Stanley Challenger Graham
Stanley's View
scg1936 at talktalk.net

I was prompted to start this topic by a free HMD pamphlet that I picked up in our local library. It's depressing to read but important. One page in particular is striking - it lists the stages in a progression from minor intolerance and dislike through to the final genocide. Once the progress begins it's difficult to stop. Also there was someone quoted as saying that the greatest shock to him was finding that his former friends, neighbours and workmates had been brainwashed and turned on him.
Top

"it lists the stages in a progression from minor intolerance and dislike through to the final genocide"
And you can see a similar progression starting again now all over the world.
Stanley Challenger Graham
Stanley's View
scg1936 at talktalk.net

Here are the two relevant pages in the HMD pamphlet... 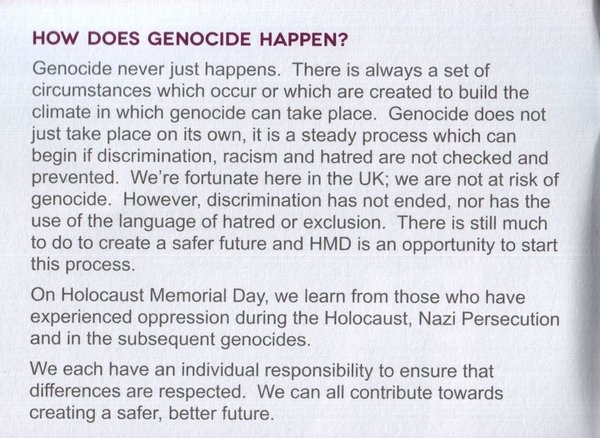 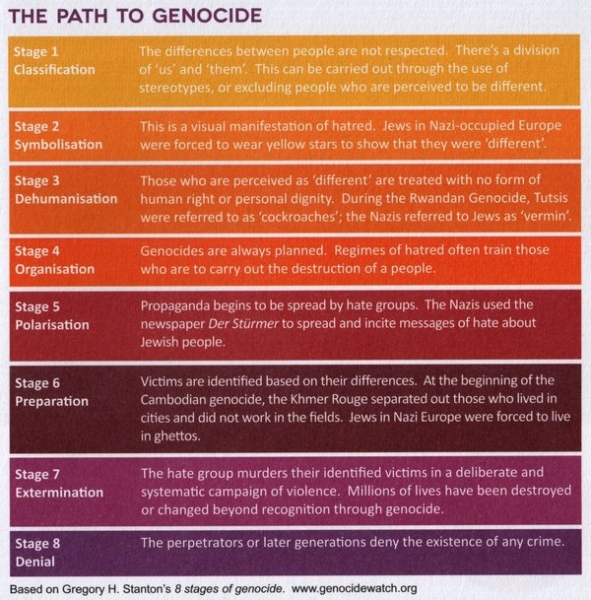 Very true and fresh in my mind after reading Diarmid Macullough's 'A History of Christianity' again. It examines the persecution and destruction of minorities in the name of religion and of course that is still happening now in the world. All nations share the guilt and there are some surprising instances of it that are almost totally forgotten today. The leaflet is correct in detailing the stages and we can see them happening today.
I once asked a Rabbi if it was permissible for a Gentile to place a Kaddish stone on a Jewish grave as a token of respect but not recite the Kaddish. He said that it was not only permissible but there ought to be more of it. HERE'S an explanation of the Kaddish. The stones are placed on the grave to show that respect has been paid.
Stanley Challenger Graham
Stanley's View
scg1936 at talktalk.net

Particularly important to me, still have family survivors of kindertransport. And family members whose parents didn't manage to escape the Soviet persecution that never seems to be mentioned.
Thank you for your posts on this subject.
cloggy
Top

Cloggy! Nice to see you are alive and well. You are correct, the holocaust wasn't the only mass slaughter or even genocide. If you look back in Stanley's view you'll find Stan's story. He was a Pole who was moved to the Gulag in Siberia by the Russians with his family and friends. They finally escaped and Stan got back to this country as a paratrooper in the British Army. He still lives in Barlick.... (Then there was Pol Pot and Bosnia.....)
Stanley Challenger Graham
Stanley's View
scg1936 at talktalk.net

The words inhumane and despicable don't come close to explaining the horrors. It should never have happened and must never happen again or ever be forgotten.
I know I'm in my own little world, but it's OK... they know me here.

Yes, Cathy. I have great trouble understanding why even today some people in Britain hate Jews, blacks, orientals etc. I suppose it's because they catch it from their parents and never engage with any that are different to themselves. The Echo Chamber effect, and we're seeing more of that at the moment.
Top

You're right Cathy. That's one of the reasons I transcribed and published Stan's story, the papers were full of awful warnings about an invasion of Polish plumbers at the time....
I couldn't find it in the site search so I have posted his original account which I subsequently used as a basisis for the articles in the BET. Look for Stanislaw Bajkowski's story.
Stanley Challenger Graham
Stanley's View
scg1936 at talktalk.net

I mentioned Freemasons on a different topic and happened on this information from Wikipedia:
`The preserved records of the Reichssicherheitshauptamt (the Reich Security Main Office) show the persecution of Freemasons during the Holocaust. RSHA Amt VII (Written Records) was overseen by Professor Franz Six and was responsible for "ideological" tasks, by which was meant the creation of anti-semitic and anti-Masonic propaganda. While the number of victims is not accurately known, historians estimate that between 80,000 and 200,000 Freemasons were killed under the Nazi regime. Masonic concentration camp inmates were classified as political prisoners and wore an inverted red triangle. Hitler believed Freemasons had succumbed to Jews conspiring against Germany.' LINK
Top

The strange thing is that the way Himmler set up the culture of the SS was closely related to the rites and forms used by the Freemasons and other esoteric orders like the Teutonic Knights. This is why Wagner was a favoured composer. The references to Nazis searching for archaeology in the Indiana Jones films is based on expeditions sent out by Himmler in search of supporting evidence for his twisted beliefs. 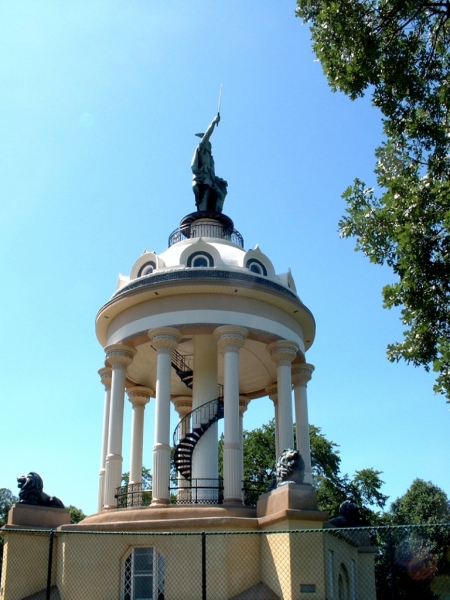 This preoccupation with the past was exported to the US with the migrants. This is the replica statue of Arminius the victor at Teutoberg in 09BC at New Ulm in the mid west. See THIS explanation of what happened. Known popularly as Herman the German.
Stanley Challenger Graham
Stanley's View
scg1936 at talktalk.net