Methane again...
`Belching in a good way: How livestock could learn from Orkney sheep' LINK
These sheep are kept away from grass and live on fresh seaweed thrown onto the beach by the waves. I expect the lower methane production is because seaweed, brown species in particular, have less cellulose than grass and can be digested by different bacteria from the usual rumen types. The sheep may well have a gut flora that has become adapted to seaweed digestion - in a similar way, human populations that live by the sea seem better adapted to seaweed as noted in this article: `Japanese Guts Are Made for Sushi' LINK
Top

I remember the walls on Orkney that forced the sheep to graze the beach areas. Same syndrome in Japan re. sushi as the genetic inability to absorb dairy foods.
Stanley Challenger Graham
Stanley's View
scg1936 at talktalk.net

These carbon fibre fan blades may be bad news for Barlick. The current titanium blade is made in Barlick but with larger manufacturing facilities in Singapore. Obviously these blades will still be needed for spares in years to come but that may mean that Barlick is left with the blade leading edge protectors and perhaps the spares manufacture. A lot of good people at Barlick so lets hope it keeps going.
Top

Time marches on P. The modern textile trade served Barlick well for less than 100 years before it failed. Rolls have been operating now in the town for over 80 years.... Nothing lasts forever!
Stanley Challenger Graham
Stanley's View
scg1936 at talktalk.net

This is why catalytic converters are being stolen from cars...
`More precious than gold: Why [the price of] the metal palladium is soaring' LINK
`The price of the precious metal palladium has soared on the global commodities markets. It has jumped by more than 25% in the last two weeks alone, and almost doubled in value over the last year. At about $2,500 (£1,922) an ounce of palladium is more expensive than gold, and the pressures forcing its price up are unlikely to ease anytime soon. But what is palladium, what is it used for, and why is its price rising?...'.
Top

When I was at Rochdale Welding, our in-house tinsmith did a thriving trade 'repairing' clapped out catalytic converters. He emptied them and gave them a new shell. I noticed the pile of what looked like dirty wire wool on his bench and asked him what he did with it. It was going in the scrap bin. I suggested that he make a few enquiries because I suspected it was Platinum or something similar. He never told me the outcome but I noted that he saved it afterwards. I suspect that he was a happy man!
THIS caught my attention this morning. More progress on understanding how immunotherapy works to fight cancer. Sounds like a refinement of the treatment I am getting at the moment. More power to their elbow!
Stanley Challenger Graham
Stanley's View
scg1936 at talktalk.net

`Malaysia returns 42 containers of 'illegal' plastic waste to UK' LINK
Good for them!

Note the sentence lower down in the article: `The UK Environment Agency said the returned waste was the responsibility of the private companies that exported it and it must be handled according to UK regulations.' I wonder what will happen to it when it gets back here?
Top

Tiz. I heard that report as well. The waste industry regularly throws up examples of terribly bad practice by cowboys who are making a quick buck by taking the responsibility for dangerous waste off the originator's hands. Waste lead acid batteries used to be simply sent out to India and forgotten. I remember waste being burned in an almost totally enclosed shed and in consequence the interior became coated with a varnish like thick coating of poison that was even worse then the original waste. Thinks of all the dioxins, PCB and organic chlorine there is out in the environment. A mate of mine died from multiple cancers caused by burning plastic off electrical cables to retrieve the copper. I have personally been poisoned by lead, Phosgene and paint solvents. I suspect we are all under some level of attack. My daughter Margaret and her husband were influenced in their decision to migrate to Australia by the fact that Ribble Cement were using spent industrial solvent as fuel for their cement kilns at Clltheroe which resulted in dioxins in the flue gases from the plant. When I was at the dairy I occasionally took a taker full of waste from our sewage treatment plant to large deep quarry above Bingley where we simply let it run into the bottom of the hole. Other wagons were there doing the same and there was never any check on what we were carrying. The bottom of the hole was filled with a witches brew of God knows what that seethed and bubbled. All that is still in there soaking into the sub strata. One of these days.......
I was once told by a source I trusted of an operation on a land fill site where a large hole was excavated and one night a loaded tank trailer was taken up there, backed over the edge and fell into the hole which was then filled in. What on earth was in that? How long before it leaches out into the watercourse that runs below to site?
It's almost certain that there are dirty secrets out there and some of them could come back to bite us.
Stanley Challenger Graham
Stanley's View
scg1936 at talktalk.net

I saw a news story today claiming archaeologists had found remains of a man in Herculaneum from Roman times who was a victim of the Vesuvius eruption and his brain had been fused into glass by the heat. This seemed a bit far fetched to me because the brain is predominantly organic, not mineral. It had me pondering about what we define as `glass'. I then got diverted into those claims that old church window glass is thicker at the base due to glass being a viscous liquid and moving slowly down under gravity. This is a myth. Most of the oldest items of glass known to us don't show such thickening and the examples that exist are put down to the way glass was manufactured, resulting in thicker and thinner regions and the craftsmen always choosing to put the thicker edges towards the base. There's plenty of explanation here: Glass
Top

Do you remember the old joke about the man who reversed all the panes of glass in his windows to compensate for the fact that he believed they were slowly creeping downwards?
My mind always goes back to the oxidised Castor Oil on the engine beds at Ellenroad. Must be eighty years since it was the best oil for lubricating the pedestal bearings on the 85ton flywheel but it's still slowly flowing down the wall. We proved that when we put a new concrete floor in the cellar. Three months later the oil was flowing on top of the new concrete. I took my MSC lads down there and gave them a lecture on viscosity, Ill bet at least a couple of them never forgot!
Another practical example was the Foucault effect on the 230ft pendulum we created in the chimney when we were putting the head back on it. Peter's apprentice thought the stack was haunted until I told him what was happening. 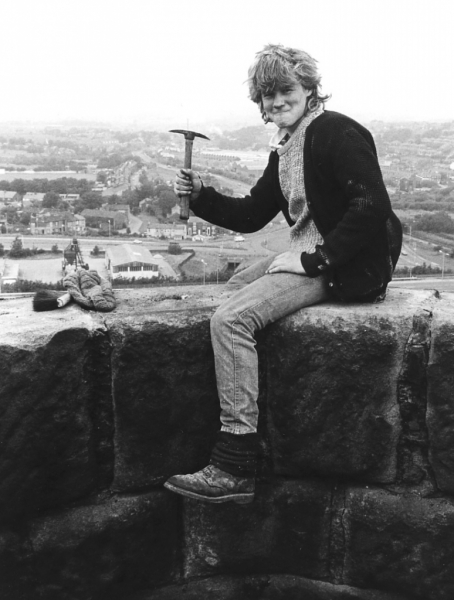 Here he is on top of the stack. A cheeky and very intelligent lad, I often wonder what became of him. I reckon he would go far.
Stanley Challenger Graham
Stanley's View
scg1936 at talktalk.net

I was being a bit cheeky - I knew it was to do with pendulums but when I put `Foucault effect' into google all the entries where about organisations!

It must be that only Old Farts like me who have read Eco know what it it is.....
(LINK.) Not the easiest read byt very rewarding if you stay the course.
"Foucault's Pendulum (1988) has been called "the thinking man's Da Vinci Code"".
Stanley Challenger Graham
Stanley's View
scg1936 at talktalk.net

'Force is that which moves or tends to move a body' They said at school.

Yes OK that's what it does, but what is it?

When two like poles of a magnet repel each other - what's going on there?

David. Just two opposing forces reminding us that they have their own set of rules and stick to them. The sort of science I understand as opposed to cats being in two boxes at the same time!
Stanley Challenger Graham
Stanley's View
scg1936 at talktalk.net

Always struggled with magnetism. With permanent magnets charged particles move from one end to the other said to be caused by loosely paired particle being free to move. Why these particles want to move in the first place is beyond me. Like particle repel each other and like particles attract.
Best I can do.

But while we are at it..
Tides.. High tides occur every 12 hours. a tidal bulge being caused by the gravity of the moon on opposite sides of the earth. Watching some of the youtube explanations the graphics are right but the explanations look doubtful. I have my own theory but can't confirm it yet.
Anybody care to comment.
Top

Tides: Not exactly every 12 hours. It's all to do with the gravity exerted by the moon isn't it? Gravity: more quantum mechanics!

These little things are a big deal!
Top

A new theory has emerged suggesting that the Graviton, itself a theoretic particle, could now have mass which would explain away dark matter? and why the universe is expanding faster than it should be. Be that as it may it doesn't explain why there is a tidal bulge on the opposite side of the earth to where the moon is positioned.
Back to you China.
Top

But not surprising when we've found it's fundamental to semiconductors, lasers, smartphones etc, and even in photosynthesis in the leaves of plants and algae. We don't understand everything about it but believe that it exists and explains many phenomena. We'll use it until we find something better to replace it!


The graviton is still a hypothetical particle and clashes with relativity theory... Graviton
Top

plaques wrote: ↑
30 Jan 2020, 08:37
A new theory has emerged suggesting that the Graviton, itself a theoretic particle, could now have mass which would explain away dark matter? and why the universe is expanding faster than it should be. Be that as it may it doesn't explain why there is a tidal bulge on the opposite side of the earth to where the moon is positioned.
Back to you China.

I answered this and my reply isn't here! It isn't in my drafts folder either!

I'll give a link to a good site, their explanaton is better than mine, even why they have a frequency of 12 hours 25 minutes and not 12 hours.

There is a good graphic on this site: