Not antler, horn or tooth and not a tool, though I can see why you suggest those.

It looks like the stalk from a green pepper that's fallen under the fridge and gone a bit mouldy!

I haven't got around to putting that photo on yet!

That semicircular groove in the top surface is nagging me. Is it a bone, possibly fossilised?
Stanley Challenger Graham
Stanley's View
scg1936 at talktalk.net

It's not a fossil, not bone and is not of animal or vegetable origin. It's a difficult one so I'll have to give a clue. It arose accidentally and not through design or intention.
Nullius in verba: On the word of no one (Motto of the Royal Society)
Top

Is it the result of something that has been subjected to heat or an explosion of some kind?
Kev

Magma that has emerged in water?
Ian
Top

Not stalactite, not magma, not explosion debris but it has been subject to high temperature. It's composed of two different materials and it's not natural but a result of human activity.
Nullius in verba: On the word of no one (Motto of the Royal Society)
Top

Brimham , Nidderdale ?
1947 my school in Hazelhead, Yorks. offered pupils a chance to go on a 4 week outdoor holiday at Pately Bridge, my father thought it was a good idea and coughed up the money, it was a time i have never forgot , hard but enjoyable, cross country running, rock scrambling up running streams and water falls,mild pot holing, dancing lessons "it was mixed sexes", at 10yrs i was shy at putting my arms around the opposite sex !. One interesting note was that RC religion was scarce in my part of Yorkshire, i was b. C of E but practiced Methodist, ie Sunday school etc. there was one Catholic lad Roy Sutton on the holiday and the nearest Catholic chapel was a 3 mile walk away and Roy was nervous on his own so i offered to go with him on the Sundays involved, receiving religious instruction from Roy whilst walking on what to do with the palaver of confession, host, wine, and the crossing of ones self.

We were take all around the Nidderdale area to places of interest and Brimham Rocks was one of them. Who would have thought 70 years later i would still remember ?.
Top

Like you Bodge I love the way bits of knowledge from years ago can suddenly pop to the surface. Even better is when something you learned like that turns out to be exactly right. That cropped up the other day in Sliver as in driver. It clicked with you and Brimham Rocks.
Stanley Challenger Graham
Stanley's View
scg1936 at talktalk.net

No wood or metal or seawater, although it does consist of two different materials fused together by heat. Think of industrial processes.
Nullius in verba: On the word of no one (Motto of the Royal Society)
Top

That's close enough Stanley, it would be asking too much for a more detailed identification without me giving a lot of clues. It was among material collected by archaeologists from a glass furnace site at Glasshouse Lane, Kirdford, West Sussex. It's typical of what the workers called `stones', lumps of sand incompletely melted or, as here, a fragment of crucible or furnace roof that fell into the melt. The glassblower would pull them out of the molten glass using tongs and fling them aside on a pile of waste. The light material is the offending ceramic and the dark horn shape is the tail of molten glass that came out attached to it.

The photo was in an article about the glass industry and I learnt some new facts. For instance, I already knew how the tax on glass from 1746 accounts for many of those bricked up windows in old houses but I didn't realise how much it affected the industry. A law was passed to prevent the `stirring up of the fire or addition of new coals' to wilfully obstruct the tax officials carrying out their duty. There was so much tax avoidance that further regulation was introduced to allow the tax men to lock the annealing chambers with the keys held only by Excise officers. As a result, they alone had the power to release glassware for sale. There were further implications of the tax too. It was eventually realised by the government in 1835 that the tax was stifling innovation and England had failed to develop lens-making capability and so we had to import all lenses for spectacles, telescopes and microscopes. Excise taxation on glass was therefore repealed in 1845.
Nullius in verba: On the word of no one (Motto of the Royal Society)
Top 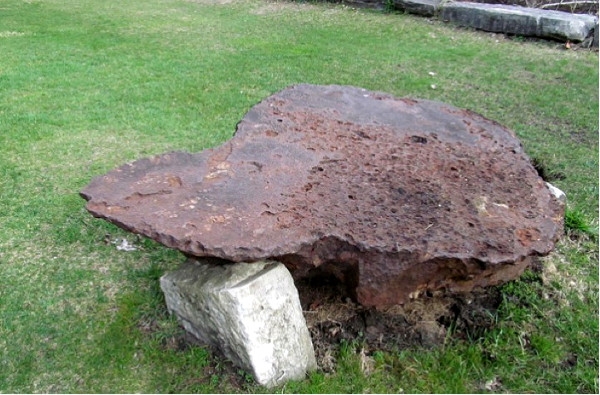 Is it a staddle stone?
Kev

Material from an old bloomery furnace?
Nullius in verba: On the word of no one (Motto of the Royal Society)
Top

Curses, Peter has gone straight to it. I can see where you were coming from Kev but this is the American version of the debris from the bottom of a bloomery furnace and is called a 'salamander' it's almost pure iron. The English version is heavy slag which gradually gathered in the sump of a furnace and was removed when the furnace was relined and was called a 'bear'. I first saw them in the Lake District near a bloomery where they had been used as top stones on a wall.
Next one?
Stanley Challenger Graham
Stanley's View
scg1936 at talktalk.net

Also found often in the Forest of Dean.
Sorry to end it so quickly - perhaps I should have put up a spoiler instead? Enthusiasm got the better of me!

No Peter, you knew the answer. Simple as that! 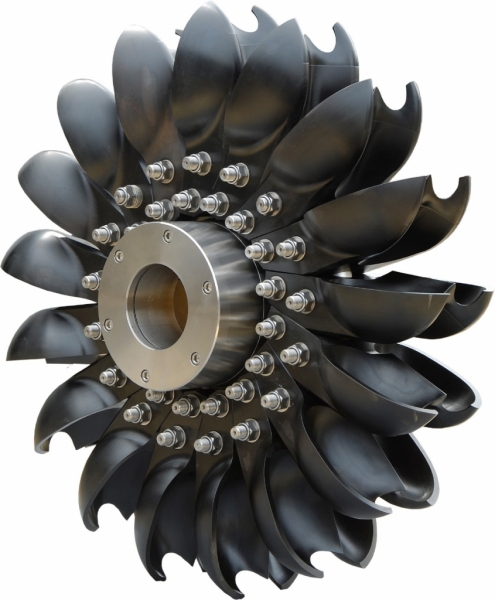 First tell me what it is but then tell me what is the most widely accepted explanation for what led to the design?
Stanley Challenger Graham
Stanley's View
scg1936 at talktalk.net

Is it some sort of turbine?
Gloria
Now an Honorary Chief Engineer who'd be dangerous with a brain!!!
http://www.briercliffesociety.co.uk
http://www.lfhhs.org.uk
Top

Yes Gloria it is but I want a name and a widely believed origin.
Stanley Challenger Graham
Stanley's View
scg1936 at talktalk.net