I am trying to piece together the post WW2 life of Private John Preston of the Loyal Reigment North Lancashires, who died in 1951, after being invalided out of the army in 1945, he was a regular soldier from 1929 and won the MM in Palestine in 1936. His funeral was reported in the Burnley Express as having been paid for by Lucas Staff Appeal fund with full military honours as he had no family. He was stated to be living in Moorfields, formerly Primrose Bank, formerly the workhouse at Burnley, and died in Burnley General 13.1.1951 aged only 39. However his death certificate states "of Craven Working Men's Home, Barnoldswick". Can anyone tell me anything about this institution, and is there an archive or a register perhaps.
Thanks for any help, this is so that we can help to tidy up his grave in Burnley Cemetery (Friends of Burnley Cemetery).
Anne
Top

From newspaper reports it looks as if the Craven Working Men's Home Company was formed in 1908 and it crops up regularly in local newspaper columns as home to both accused and victims until the mid 1950's when they were struggling to get the premises licensed. Was it on the Butts Stanley?
https://www.wunderground.com/personal-w ... UNITEDK203
Top

There were 50 men living there at the time of the 1939 register.
https://www.wunderground.com/personal-w ... UNITEDK203
Top

Morning Anne and Wendy. This is an interesting one! Early in the morning and I am still wakening up but I'll do my best.
I have never come across the Craven Working men's Home and there is nothing in my index. However Wendy has found it and so it existed. I can think of no other possible location than Butts and in that context some of what we know fits. 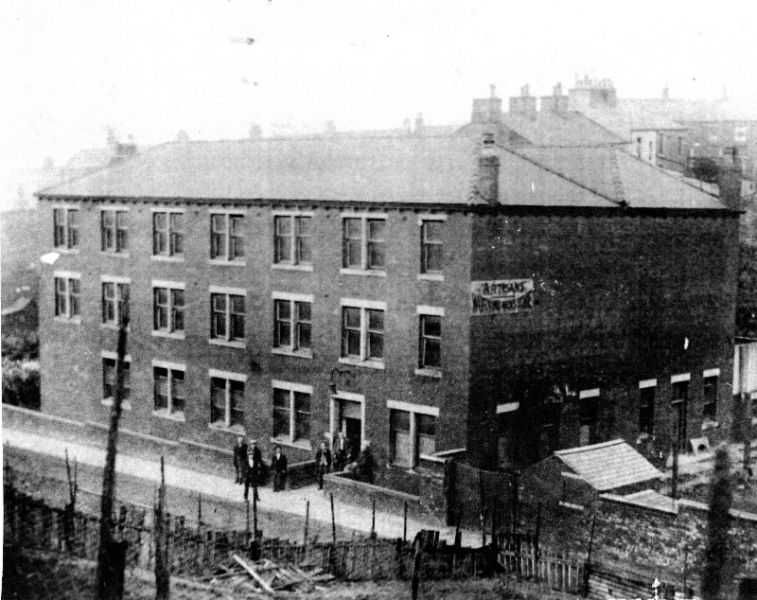 Model lodging house in Butts in about 1920. 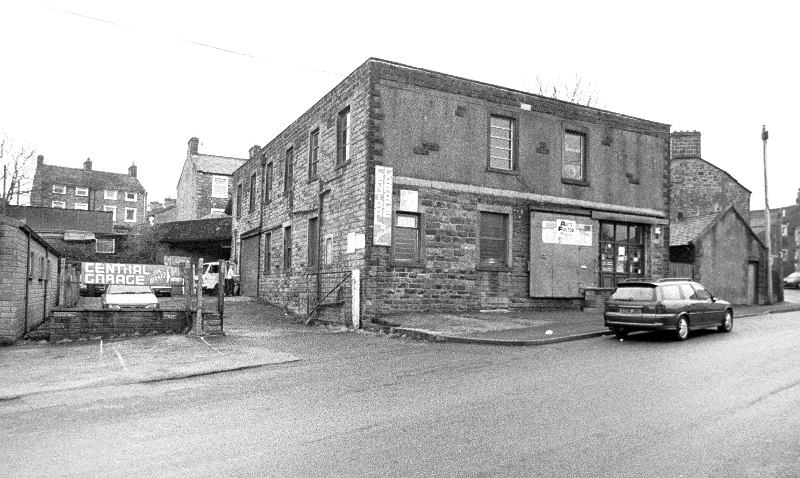 What is now the Model Garage in Butts.

These are the two candidates. Harold Duxbury told me that the Model Lodging House (top) was built about 1911 by Bill Taylor and his brother Harry. They also built the houses on Hollins Road and most of Taylor Street, both in the same area. It was built as accommodation for itinerant weavers who lodged there and worked as casual labour in the local mills. (Tramp Weavers). William Duxbury, Harold's father, went into partnership with Jack Briggs as builders and bought William Holdsworth's Joinery and building business in Commercial Street just behind Butts. They prospered and extended and in 1936 bought the Lodging House when it ceased to be a lodging house because of the fall in demand for labour in the mills and it became what it still is today, Briggs and Duxbury's Model Joinery works. Notice that the lodging house is built with Accrington brick.

What is today the Model Garage is nearer the town and is stone built which implies a different builder, date of build and possible role. Harold told me that it was still in use until at least 1936 when B&D moved into Butts but crucially he never said what for. I always assumed it was another lodging house. A further fact that could be pertinent is that this building is adjoining what used to be the Pound and then the Town Mortuary which signals community ownership of that land.
So, taking these facts into consideration, the garage would be my guess as the Home. It all fits and is reinforced by that fact I can think of no other site that could be a candidate.
Stanley Challenger Graham
Stanley's View
scg1936 at talktalk.net

Stanley, I found a reference in the Burnley Express which said it had been built by W Hartley who built the cinema etc.
The next address in the 1939 Register is on Church Street.
https://www.wunderground.com/personal-w ... UNITEDK203
Top

Hmmm... The Model Garage doesn't look like one of Hartley's designs but I have always been intrigued by the fact it has a flat roof which is very unusual in Barlick and certainly no part of Hartley's style.
The Church Street reference is puzzling. The block next door to the plot that the One Stop shop is on is definitely a Hartley design, it has his trademark pediments and date stone. You can rule out the whole of the Commercial block which is 1815 to 1817. Looking at the other side of the road I have often wondered about the origin of the block from Savage's old shop to what was the Wellhouse farm site. They are very tall, the only buildings I know of built entirely using ashlar dressed stone. That might be a candidate but there is something else that bothers me.
It would be very unusual to build an institutional building on what was the main thoroughfare. Lots more income could be generated from commercial property.
So a question, what was on the site of the Barclay's Bank? It's a bit of a puzzle. What we desperately need is some hard information.

It comes between no 26, Butts and 3 Church Street in the register. I've checked the item in The Burnley Express about the death of Matthew Hartley in 1925 and it states that he built the Craven Working Men's Home.
https://www.wunderground.com/personal-w ... UNITEDK203
Top

Nice information Wendy which I didn't know. It's in the index! The location doesn't help me much beyond pointing to those three storey buildings I mentioned early on....
Stanley Challenger Graham
Stanley's View
scg1936 at talktalk.net

If you look at this side by side view the only building that wasn't there in the early 1900s is the rectangular building which is now cottages, one called Rose Cottage?
However the home was fined during the war for showing lights in the cellar windows which were below ground level but shone on buildings across the street.

I shall have to give all this some quality thinking time!
Stanley Challenger Graham
Stanley's View
scg1936 at talktalk.net

Not sure how to reply so this is to all of you. Thank you very much for the information provided, I am not only grateful for your interest but very impressed with your knowledge! At least I now know it did exist, and where (if I understand rightly between no. 26 Butts and 3 Church St.)

If anyone finds any indication that it was used for ex-servicemen returning from WW2, please let me know.

Thanks very much
Anne
Top

I wonder if Council minutes would give an answer? I have just looked at the 1951 Register of Electors and there is a listing for Craven Working Men's Homes with about 70 men listed.
https://www.wunderground.com/personal-w ... UNITEDK203
Top

Ken Ranson has contacted me to confirm that the garage was the Home. It used to have another floor and a pitched roof.
https://www.wunderground.com/personal-w ... UNITEDK203
Top

Well Annie - you certainly came to the right site. Welcome to the club.

So it was actually in Butts and was the wooden building used by Hot Breath?
Stanley Challenger Graham
Stanley's View
scg1936 at talktalk.net

The model garage in the photo you posted earlier.

craven working mens home.jpg
You do not have the required permissions to view the files attached to this post.
https://www.wunderground.com/personal-w ... UNITEDK203
Top

Ahh, I understand now. Thanks. It was the reference to 3 Church Street that threw me. As I said earlier, that looked like the best candidate to me and I always suspected the roof had been modified, flat roofs are foreign in our vernacular architecture.
One more thing about the building, if you look at it carefully the floor of the upper storey is thick reinforced concrete, you can see it on the front elevation and this is why the second floor is strong enough to support cars which enter by a ramp from Commercial Street.
The wooden garage further up in Butts that I referred to was replaced by two stone built dwellings about twenty years ago.
Stanley Challenger Graham
Stanley's View
scg1936 at talktalk.net

The enumerators taking the 1939 register must have left it till they had finished all the cottages in Butts.
https://www.wunderground.com/personal-w ... UNITEDK203
Top

Can you remember the recent incident (two years ago?) when a cannabis farm was discovered there?
Stanley Challenger Graham
Stanley's View
scg1936 at talktalk.net

Thanks for all your help, as I don't know Barnoldswick I am a little confused, can you just confirm the address all you lovely people have finally agreed on, and by register do you mean electoral? I do have access to Find my past so can search on line
Regards
Top

Thanks for all your help, as I don't know Barnoldswick I am a little confused, can you just confirm the address all you lovely people have finally agreed on, and by register do you mean electoral? I do have access to Find my past so can search on line
Regards

Sorry to be confusing Ann! The building is now the Central Garage, Butts, Barnoldswick, BB18 5HP.
The 1939 Register was taken at the outbreak of war for the issue of ID cards and rationing. It is available on Findmypast and searchable by person or by address.
Barnoldswick came under Skipton for Electoral registers and are available to search on Ancestry.
https://www.wunderground.com/personal-w ... UNITEDK203
Top

Thanks! I hope you have all found this interesting too!
Regards
Anne
Top

Fascinating!
I found a Public Health Committee report in the Barlick & Earby Times from the early 1950's talking about poor conditions in the home and how the majority of men living there were elderly and infirm which wasn't the original intention. It was supposed to be a lodging for working men either passing through or new to the area.
https://www.wunderground.com/personal-w ... UNITEDK203
Top

I know we have established that Matt Hartley built it. I wonder who actually ran it. Same applies to the big Model that is now B&Ds. I'm assuming it was private management and not the Council.
Stanley Challenger Graham
Stanley's View
scg1936 at talktalk.net

Craven Working Men's Homes Ltd was registered in April 1908 with a capital of £4000 in £1 shares. The subscribers were all from Barnoldswick.
A report in the Burnley Express in 1917 states that the home had accommodation for 168 tramping weavers.
https://www.wunderground.com/personal-w ... UNITEDK203
Top
Post Reply
28 posts