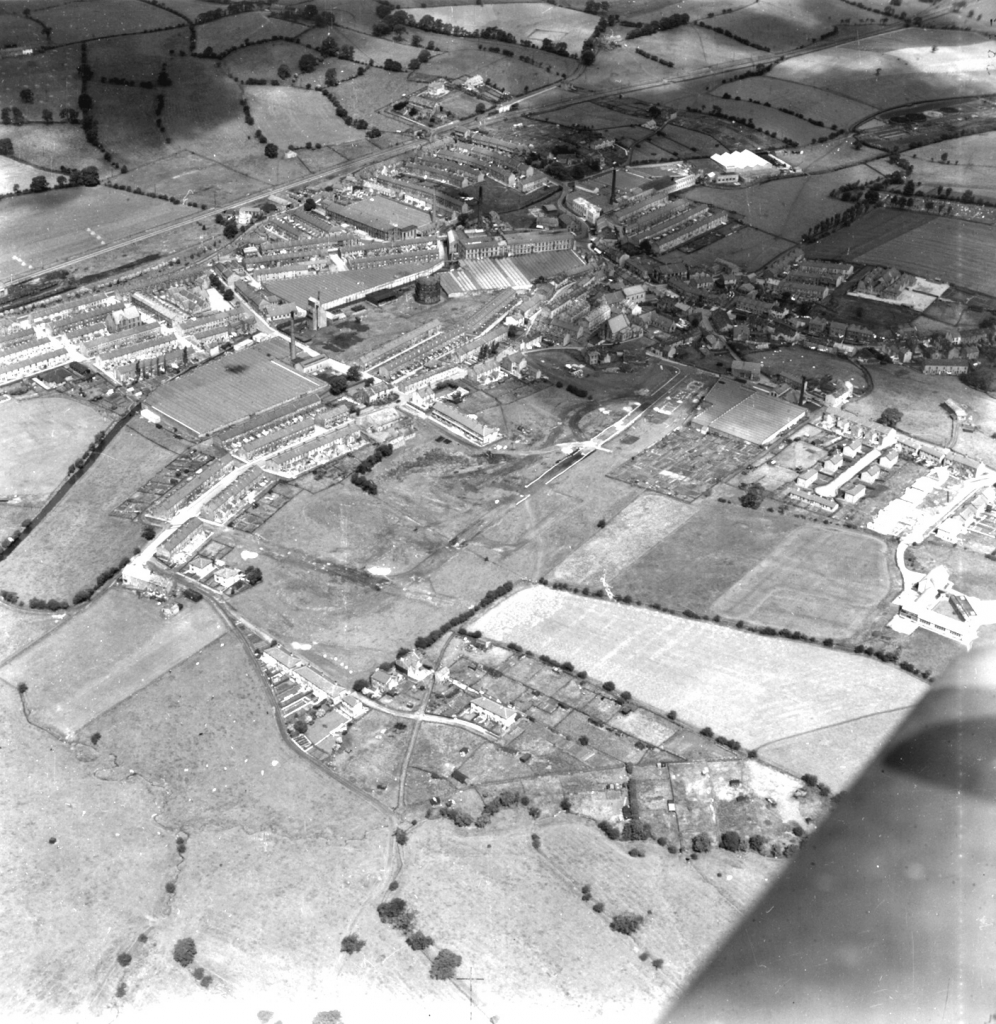 For some years now Irene Turner, my mother, had in her possession, an aerial photograph of Earby. She doesn’t know how she came to have the photograph or anything about it.
Irene (nee Collyer) was born in Earby in 1916 and lived in Earby all her life until she moved to Cambridge in about 1979.

In 2003 I started to seriously trace my family history and was collecting together any documents and photographs I could lay my hands on, and I came across this aerial photo of Earby. On the back of the photograph was stamped “Cambridge University Collection” with a note saying anyone wanting to reproduce it should contact the Director of Aerial Photography at the University of Cambridge.

During a visit to Cambridge earlier this year I decided to trace the history of this photograph. There was a catalogue number, 3N83, on the back and so it looked hopeful.

The department, which had by now changed its name to “Unit for Landscape Modeling,” was traced to Tennis Court Road, Cambridge. I took the photo and went to visit the department. I was met by a very helpful lady who, as soon as she saw the catalogue number on the rear, went straight to a ledger index and found it’s reference there. The photograph was taken on the 19th July 1948. Carefully filed away was the original 1948 negative. During 1948/49 Dr. J.K.St.Joseph, Curator in Aerial Photography at Cambridge
University was looking for previously unknown Roman military sites in northern England. A severe drought made conditions ideal for aerial archaeology.

CAMBRIDGE is the only university in the United Kingdom to run its own aircraft for the purpose of taking photographs from the air. The Collection of Air Photographs now numbers around half a million frames; these form an archive for scholarly study, which can also be consulted by the general public.

This enterprise began in 1945, when the Air Ministry made available an RAF aircraft and pilot for ten days in July to Dr. J.K. St. Joseph, then Lecturer in Geology. Similar arrangements in subsequent years allowed Dr. St. Joseph to follow a pioneering programme of photographic reconnaissance over much of Britain. The value for teaching and research in a variety of subjects of this growing collection of air-photographs led the University in 1948 to appoint him as its first Curator in Aerial Photography, supported from 1949 by a committee of management known as the Committee for Aerial Photography.

KENNETH ST JOSEPH was one of the most original and influential archaeologists of his generation. His contribution, however, was made not so much with the trowel but from the cockpit of an aeroplane.

In a career spanning more than fifty years, he was responsible for the discovery of thousands of previously unknown archaeological sites through the then-novel medium of air photography. In addition to single-handedly redrawing the archaeological map of England, he created at Cambridge University an air photographic li¬brary, teaching centre and research unit that was unique not only to Britain but the world.

John Kenneth Sinclair St. Joseph was educated at Bromsgrove School from where he went up to Selwyn College, Cambridge, in 1931. After taking his first degree in Geology he proceeded in 1937 to his doctorate and became a university demonstrator in geology. In 1939 he was elected as a fellow and college lecturer at Selwyn, where he later served as dean, librarian and vice-master. In 1948 he became a Leverhulme Research Fellow, and in 1949 the university appointed him as its first Curator of Aerial Photography.

In l962 he became director of what had by then become the Department of Aerial Photography, and in 1973 was made Professor of Air Photographic Studies.

In addition to fellowships of the British Academy, the Society of Antiquaries and the Geological Society, his academic contribution was acknowledged by the award of honorary doctorates from the universities of Cambridge, Dublin, Dundee and Amsterdam. He was appointed OBE in 1964 and CBE in 1979.

St Joseph's interest in aerial photography was first awakened by the prewar work of the great O.G.S. Crawford. It was, however his war-time duties with the Ministry of Aircraft production that fully opened his eyes to the potential of aerial photography for peacetime academic studies in fields as diverse as archaeology, geology, human geography, natural ecology and agriculture.

As soon as the war was over he began the programme of inter-disciplinary flying and photographic recording that, by the time of his retirement in 1980, had resulted in a collection of more than a third of a million photographs illustrating every aspect of the natural and man-made environments of Britain.

For the first few years the operation depended entirely on borrowed access to RAF training flights but by 1959 the reputation of the work had increased to such an extent that Cambridge University was persuaded to purchase its own survey aircraft and to bring a professional pilot on to its staff.

The increasing fame of the Cambridge University Flying programme inevitably led to invitations to explore further afield. During the 1960’s and 1970’s airborne expeditions to northern France, Denmark, The Netherlands and Ireland were all immensely rewarding, not only in terms of primary discovery but in gradually encouraging an entire new generation of European archaeologists to take to the air in pursuit of the buried past.

This consuming interest in continental affairs continued throughout his life and at the age of 80 it gave him the greatest pleasure to be invited to fly with German colleagues across the hitherto inaccessible archeological landscapes of Eastern Europe.

Throughout his professional career St. Joseph’s commitment to reconnaissance was matched by an equal concern to make the results of that work as widely available as possible.

Besides developing the Cambridge University collection as an open, publicly accessible library and teaching facility, this involved a ceaseless flow of books and papers about the techniques and results of aerial photography.

Among the most important of these were The Uses of Air Photography (1966): the first four volumes in the Cambridge Air Surveys series. Monastic sites from the Air (1952, with M.C. Knowles): Mediaeval England, an aerial survey (1958 with M.W. Beresford). The Early Development of Irish Society (1970. with E.R.Norman), and Roman Britain from the Air (l983, with S. S. Frere); and a sequence of no fewer than 50 papers reporting the results of recent reconnaissance in the journal Antiquity

Kenneth St. Joseph’s greatest passion, however, was for the Roman military archaeology of Scotland. Every summer for nearly forty years, the Cambridge University aircraft would travel to a temporary northern flying base at Perth, from where countless hours were spent criss-crossing Scot¬land in a relentless hunt for the lost forts and temporary marching camps of the Roman legions. As a consequence of those flights, and the annual campaigns of excavations that fol¬lowed them, the map of Roman Scotland has been literally and dra-matically redrawn.

To his colleagues and students Kenneth St. Joseph was a figure of tireless energy and dedication, who demanded the highest standards both from himself and from those worked with him.

In private, he was a devoted family man who is survived by his wife Daphne, whom he married in 1945, and by their two sons and two daughters.

Four things struck me of interest:
1. The photo of Earby was the only one he took in this surrounding area.
2. He was especially interested in Roman archaeology in England.
3. He wanted the results of that work as widely available as possible.
4. This is probably the earliest photograph of Earby from the air.

The Cambridge Unit for Landscape Modeling web site has a map showing the location of all the aerial photographs that they have taken.

Hello John, good to see you back on One Guy.
https://www.wunderground.com/personal-w ... UNITEDK203
Top

Wonderful. Thanks John for bringing this to our notice again. I had forgotten it.
Nice to see you posting again!
Later, I have just spent a happy 30 minutes digging into the image. Fascinating!
Stanley Challenger Graham
Stanley's View
scg1936 at talktalk.net

Whyperion
Senior Member
Posts: 2376
Joined: 23 Jan 2012, 22:13
Location: Stockport, after some time in Burnley , After leaving Barnoldswick , except when I am in London

I didn't know of the Cambridge University Air Photo Collection or collecting!
I have not searched the other two main air sites. Airfilms (?) is a private operation, I think they took photos then attempted to sell them to the farm , industry and householders as their main commercial photographing. The Air Ministry (MOD) was the other, particulary during and after WW2 I presume to track the likes of Bomb Damage in the UK, over laying to OS maps to assist the OS to update and amend mapping, and also for the emerging Land Planning uses for local authorities (identifying sites and their uses pre the planning acts of the late 1940s), as well as gaining experience in identifying objects from air photographs - it is not easy - one often needs a knowledge of ground level buildings and the like to interprete - a problem still today when identifying military targets in a civillian landscape.
Top

I have to confess that the penny has only just dropped! I hadn't made the connection with the John Turner who posted such splendid material. Put it down to age......
I have apologised to him......
Stanley Challenger Graham
Stanley's View
scg1936 at talktalk.net

The link at the end of John's article doesn't work for me - Firefox says it can't find it.
Nullius in verba: On the word of no one (Motto of the Royal Society)
Top

The link is probably part of the original 2004 post Tiz.
https://www.wunderground.com/personal-w ... UNITEDK203
Top

A quick Google gives us this link:

Tiz, I found the same thing, Wendy is right I think.
That's a better link than the one I found so I have bookmarked it.
Stanley Challenger Graham
Stanley's View
scg1936 at talktalk.net

Thanks all, the link was from the original 2004 document, I've updated the article with the new link.
John

In case you're wondering John, we lost the old icon that showed we had read the post and I for one use this one now just to let people know that I have read and agree but have no valid comment to add.
Stanley Challenger Graham
Stanley's View
scg1936 at talktalk.net

Thanks for the clarifications. A very useful link.

Nullius in verba: On the word of no one (Motto of the Royal Society)
Top
Post Reply
13 posts • Page 1 of 1