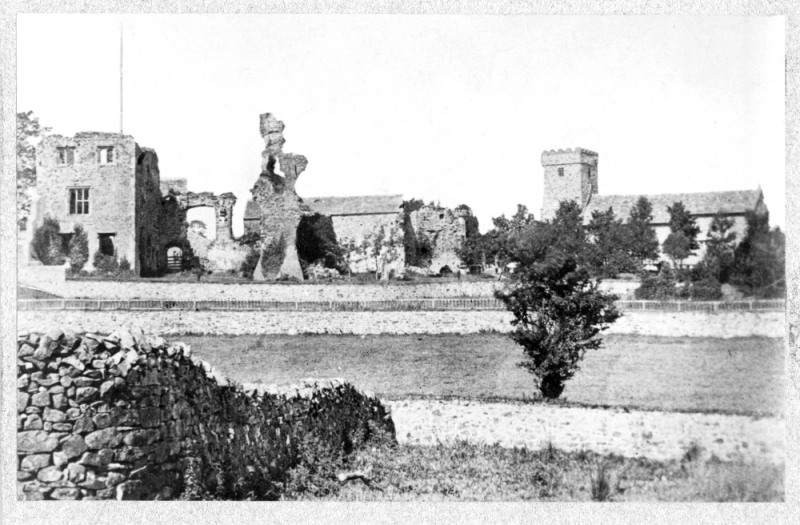 This is a pic of the remnants of Bracewell Hall reputedly taken by William Bracewell (Billycock of Newfield Edge) in about 1850.  As Hopwood bought the estate and rebuilt the hall shortly afterwards this is a correct date and it wouldn't surprise me if Billycock had a hobby.  There was certainly a minor gentry hall here probably dating back to the 12th century when the Tempests had the manor of Bracewell.  It has always been said that it was built of brick, very unusual in this district.  As far as I know there is no definite evidence of this but some remnants of the old hall were incorporated in the new build of 1857(?) which was demolished in 1950 after a long period of neglect followed by a serious fire.  There is still a fragment of the 1857 build left incorporated into a house built by Briggs and Duxbury on the site after they demolished the hall.  It could well be that buried in this building there may be fragments of the 12th century building which could give a clue.  There is a building existing on the site called 'King Henry's Parlour' because there is a legend he stayed there at one time.  This has a fragment of a 14th C window and is built of stone.  However, there are some clues on the site and in the remains of the water mill further down the valley.  There is a field called 'Kiln Hill’ near the site of the hall and some old brick which looks like Tudor Brick to me in a wall near the mill.

From the evidence my interpretation/conjecture is that the original hall and buildings were almost certainly timber construction.  The usual progression on a site like this was for the timber hall to survive until the 16th C when, with the Dissolution of the monasteries and increasing wealth the minor gentry had the capital and the skills available to rebuild in stone as the masons of that time were almost exclusively employed by the Crown and the monasteries. However, the evidence suggests that King Henry’s Parlour was an original stone build and it may be that the hall, if timber, was rebuilt in stone as well. This is unusual so early but not impossible and I can’t help wondering whether it might have been built/rebuilt at the same time as the church using the same masons. As for the brick; the surviving bricks I have seen look Tudor to me and it could well be that the existing hall was re-worked in the 16th/17th century using locally fired brick as the predominant material.

It’s a long time since I looked at the Tempests in detail but they gradually increased their estates and interests and moved their seat to Broughton and later had more estates further East in Yorkshire. It could well be that the brick rebuild was at the end of Bracewell’s importance for them and as their interests moved east the hall at Bracewell went into decline. This is certainly the impression given by the photograph of 1850. The condition of the building fits in well with 200 years of decay.


STOCK
Very difficult to separate Stock from Bracewell so I’ll include it here. I’m always wary of relying on place names as hard evidence, the most they can do is give some clues. The English Place-name Society version of the name Stock is: Stoche 1086 DB. Stock(e) 1147-50, Yorkshire Charters 1471. Same spelling in various references ‘til 1657 and various spellings such as Stok, Stokke, Stoke. Probably Old English ‘stoc’ – ‘place’ possibly in the sense of dairy farm, outlying farmstead. In Stock there is Aynams Hill, ‘af-nam’ is generally taken to mean an detached part of an estate. The earliest reference found by EPNS for Monk Bridge is in a manuscript of 1771. There is no name marked for Monk Bridge on the 1717 estate map by Thomas Weddell.

Eilert Ekwall (Oxford Dictionary of English Place-names) Sows further confusion. Here’s what he has to say about it: OE stoc is found in the sense 'monastery, cell'. The original meaning 'place' is recorded in Orm c 1200 (i faderr stoke 'in a father's stead' &c.), and Symeon of Durham renders Wdestok by 'silvarum locus'. OE also had stocweard 'townsman' and stocwic as a variant of stoc. The meaning ‘monastery, cell' is a specialization of the meaning 'place'. Cf. STOW. Stoc is etymologically related to stow, styde. In pl. ns. a meaning such as 'holy place, monastery' is obvious in HALSTOCK, and it is probably found in some other names. BRADENSTOKE was a monastery, and there was a monastery, founded in the 10th cent., at TAVISTOCK. KEWSTOKE seems to contain a saint's name. BINDON Abbey Do is called Bindonestok 1236 Ch. A meaning 'meeting-place' is plausible in the hundred-names Redborn-stoke Bd, perhaps Winterstoke So. But these meanings cannot be assumed for the bulk of cases. Nor can stoc mean simply ‘place’ except in some special cases, as TOSTOCK, if that means 'look-out place'. STOKE alone is a very common pl. n., and many names now consisting of stoc and some other el. were originally Stoke. The fact that STOKE is such a common name indicates that the places so named were once dependent on some village or manor. This is corroborated by the fact that a good many names in -stoc have as first el. the name of a neighbouring Village. CALSTOCK and CHARDSTOCK are 3 miles distant from CALLINGTON and CHARD respectively. The names mean 'STOCK belonging to Callington (Chard)'. BASINGSTOKE is near - BASING, MEONSTOKE near MEON, PURTON STOCK near PURTON. NAVESTOCK is 9 miles from NAZEING, but may quite well have been an outlying farm belonging to Nazeing. The exact meaning of stoc may have varied, but the probability is that it was generally 'cattle-farm, dairy-farm'. This is indicated by the name POUNDSTOCK, which has as first el. the word pound 'fold'. STOKENHAM was formerly also Hurdestoke (1198 Cur) -stoc of the flock or of the cowherds'.

The first el. of names in -stoc is often a Pers. n., as AD-, FRITHEL-, HADSTOCK, sometimes a tribal name, as COSTOCK, or a common noun, as BRIG-, LAVERSTOCK, or a river-name or some other pl. n., as GREYSTOKE, TAWSTOCK.

As a first el. stoc is probably often to be assumed rather than stocc. Many STOCKTON; (STAUGHTONS, STOUGHTONS) are probably Stoc-tun. Stoughton Sr is opposite to Stoke. Stoc is certainly the first el. of STOCKLAND, STOCKLINCH, STOCKSFIELD, STOCKWOOD, STOKESLEY.

The form of the element is mostly Stoke, -stoke. But the uninflected form stoc would give Stock, -stock, a form sometimes found. In early sources Stoke often appears in the plural form Stokes, showing that the OE form was in many cases stocu plur. STOKEHAM represents the dat. plur. OE stocum.

OE stocc 'stock, trunk of a tree' is a far rarer pl. n. el. than stoc, and can as a rule easily be distinguished from it. As a second el. it is found in WARSTOCK. STOCK (from. Stocc) alone occurs as a pl. n., perhaps in the sense 'foot-bridge'. As a first el. stocc is fairly common, and also a derivative stoccen 'made of stocks' occurs.

So, take your pick!  A detached farm, a monkish cell or a footbridge.  As for the hamlet of Stock itself, I can offer one or two concrete facts.  From the evidence it seems to have been regarded as part of the Manor of Bracewell.   In Domesday (1085/86) 'Stoche' is mentioned under the tenant Archil.  Notice that this use of the name is almost certainly the original pre-Conquest Saxon name and this was long before any record of monastic activity in Barnoldswick.  The map of 1717 showing the common fields seems to indicate that all the land at that time was worked by both Bracewell and Stock tenants, all part of the Bracewell Estate which seems to coincide with the boundary of the manor.  Whilst Stoche was dealt with separately in the Domesday it seems to have been or became an outlier of Bracewell.  Stock as a village was a viable unit until the mid 19th century.  Baines for 1822 records two shopkeepers there; John Carr and Christopher Hornby.  The 1851 census reports James Howarth farming 155 acres. Sarah Edmondson, pauper. Margaret Clark, HLW.  John Broughton, builder.  Henry Watson, ag. labourer.  Christopher Waite, farming 75 acres.  William Edmondson farming 42 acres.  All the evidence points to the village becoming depopulated by migration to Barnoldswick with the rise of employment and economic activity in Barnoldswick.

Back to the original point which was the origin of the name 'Stock'.  I think the crucial pointer could be the fact that the name existed before any monastic activity.  Remember that a third of Craven was laid waste in the post-Conquest rebellions.  It was not until this destruction and depopulation took place that the area became attractive to the Cistercians.  They liked to move into areas where there was no opposition.  Indeed, the name Stoche existed before the Cistercian Order was founded.  My feeling is that the fact that it was an outlier of Bracewell is the key and therefore the name is most likely to be derived from 'outlying dairy farm'.  I was tempted by footbridge briefly but then remembered that there was no bridge on Hall Lane which connects Stock to Bracewell, it is a paved ford and there is no evidence of it ever being anything else.  The footbridge that crosses the beck is modern.  So, until anyone convinces me differently I'll stick with the outlier.
Stanley Challenger Graham
Stanley's View
scg1936 at talktalk.net