I hope all of you have a happy and prosperous New Year! In late November as I write this I have no idea what the year will look like, at the moment we are still in the middle of you know what. The only prediction I will make is that no matter what happens we will survive it, in a long life I have seen some pretty dodgy New Years but I am still here to tell the tale.
As many of you know, I spent a lot of my driving career in Scotland and developed a great affection for the country and the people, especially the members of the farming community I met when I was driving the cattle wagon for Richard Drinkall at Yew Tree Farm West Marton. I picked up some pearls of wisdom from them and they may be of help today. How about "If a man isn't fishing he should be mending his nets", there's a lot of truth in that one. They also had what to many people in these days is an unattainable goal, the older end of the community always tried to enter the New Year free of debt as far as possible. I know that to many people this is a bad joke and I have tremendous sympathy for young couples rearing a family today. As I have said so many times, it was far easier 50 years ago because there wasn't the pressure there is now on our kids to become consumers. Every child I see today has an expensive mobile phone in one hand and seems to have developed the remarkable skill of communicating with one thumb! Someone somewhere bought that essential piece of modern technology and is financing the charges. Fifty years ago my kids still talked to their friends and the only brand they recognised was Ladybird books and I note that they are just as popular today and now include books for adults. Are children's books still popular, do our children still read? I hope some of them do but am not in touch with the world of modern childhood.
I still cherish the memory of coming home one New Year's Day after delivering a load of milk down the country and as I came in the house Vera warned me to be quiet and showed me what was happening in the front room. My daughters and a group of their friends were sat in a semicircle on the floor and a friend of mine, John Pudney, was reading them some of his poetry. He was in the middle of 'The Man who repaired the Queen's Refrigerator. He was on his way North to visit friends and had dropped in. It had an effect on all of them and later in the year I did a snap of some of the group sat in the garden listening while Susan read from a book of poems by Pam Ayres. Call me old fashioned but I wish you memories like that! 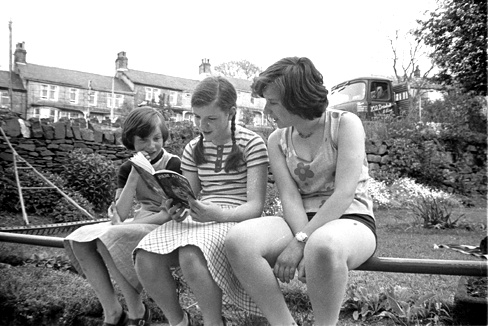