I'm sure many of you remember that I have an interest in water, it is such an important component of understanding the basics of our town. You may also recall that one of the matters that has been bugging me for years is the question of water supplies to Butts Mill. To recap, Butts was always short of water for cooling the condensers on the engines which is crucial for economic running, an efficient well cooled condenser can save ten percent of the fuel bill. Butts is on the course of two becks, in fact their natural flow is a confluence in Butts where Calf Hall Beck and Gillians Beck become one flow in Butts Beck, and you'd think this would be a solution but there is a problem.
The confluence of the two becks is below the mill, Calf Hall Beck could be diverted under the mill into an underground reservoir which served the boiler house but Gillians is at a lower level and couldn't be used without expensive pumping arrangements. The solution was obvious, they needed to access the water in Gillians at a higher level and convey it to the mill, the question is how.
When William Bracewell built the mill in 1846 he also bought Ouzledale Mill which is sufficiently high to be able to feed Butts reservoir. It was only when he had bought it that he realised that even though Ouzledale used the Gillians water, Clough Mill (formerly Mitchell's Mill) owned the water rights on Gillians from their mill right up to the moor and so it was illegal to abstract water from there. Over the years Butts came to an agreement with Mitchell or the Slater Brothers who later owned the mill whereby he could extract water from the beck if measured by a Lea Water Meter. I have hard evidence that this was the case because there are entries in the Calf Hall Shed Company's minute books about the meter and its eventual redundancy.
Then I noticed on the 1887 sale map of the Butts Mill that there was a stub branching off the Calf Hall Beck back into the Parrock, land owned by the Trustees of the Baptist Church. It was logical that there must have been a balance pond supplied from Clough but unfortunately it isn't on the map and I could never find hard evidence.
Fast forwards to this week when I was writing the Baptist Church articles and I noticed a tiny reference on one of my research notes that had previously slipped me. It was something I found years ago when I was researching the old BUDC records. In the letter book there is a letter from Tom Biker the BUDC engineer to Butts mill making a query about pipes 'beneath their dam in the Parrock'.
Moments like this are precious to any detective and a researcher is just that. I had tripped over the key bit of hard evidence that proves my contention about the balance pond! Yippee! It's taken 40 years but I have got there in the end. 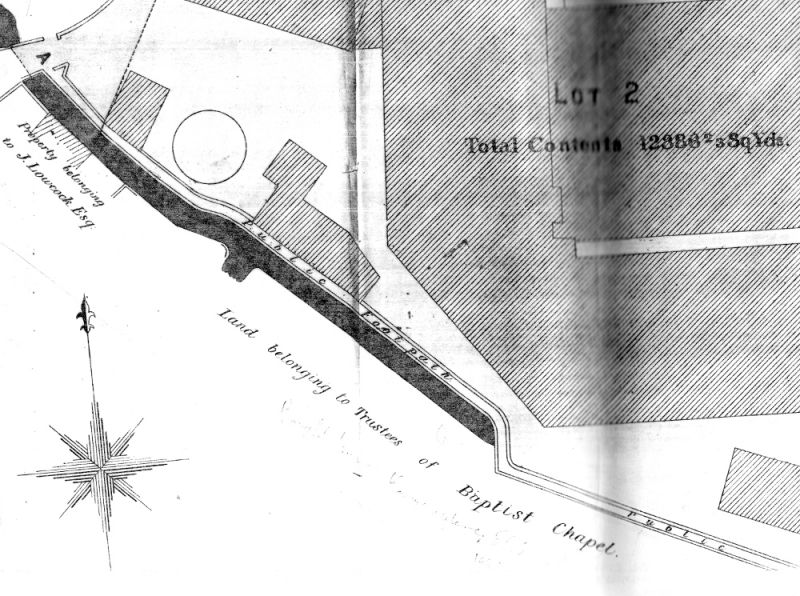 The 1887 sale plan that shows the branch into the Parrock.
Stanley Challenger Graham
Stanley's View
scg1936 at talktalk.net