This week, let’s have a rest from pedigrees and land ownership which is always a minefield because we are never actually certain of dates and often there is conflicting evidence. I’m going to have a look at something I am more comfortable with. It’s quite certain that the major economic activity in the Martons was always farming and land management but at the same time there were other initiatives.
I have to start by acknowledging that George Ingle’s wonderful research into early cotton mills has been invaluable, I have also used Chris Aspin’s book ‘The Water Spinners’. In 1801 a John Bond had a water spinning mill at ‘Marton’ and had insurance cover as follows: Mill £40, Nearby spinning shop, £30. Millwork £30. Machinery (mill) £20. Machinery (spinning) £100. Stock in mill £50. Stock for spinning £30. The mill was stopped by 1820. A John Bond was also the publican at the Cross Keys in East Marton and is likely to be the same man. In ‘Marriner’s Yarns’, George mentions the mill and gives some more information. John Bond features several times in the ledgers of Marriners at Greengates Mill, Keighley and twenty five of the hand loom weavers in these ledgers worked in Marton and others at Broughton and Bank Newton. Bond may have been a local agent for Marriners, putting out yarn to local HLW, his name is scrawled across several pages in the ledgers.
There is another notable textile connection with the Martons. Chris Aspin reports that in 1785 Thomas Dewhurst of Marton was a farmer and also carried on the trade of woollen manufacturer. He bought his twist from Darlington and put it out to local hand loom weavers. In 1789 he bought Elslack water mill and by 1790 he had converted it to cotton spinning using the new Arkwright machinery and was selling twist in Manchester and Blackburn. He and his brothers were very active buying mills and in 1828 they built the original Belle Vue Mill in Skipton and rebuilt it after a fire in 1831, this was the foundation of Dewhurst and Co who became the biggest employers in Skipton.
In 1792, Richard Croasdill who farmed at Marton Scar entered into a partnership which founded and built Dale End Mill at Lothersdale, he put up 25% of the capital. The insurance value of the mill was £1,500.
An entry in the 1822 Baines Directory names William Brown as Victualler at the New Inn, West Marton. William Atkinson in his unpublished memoir ‘Old Barlick’ notes on page 12 that an entry in the West Riding directory for 1838 says that there was a public house at West Marton called the Heber Arms run by Henry Langstroth. The Roundell family already owned land in Marton and in 1841 bought the rest of the Martons from the heiress of the Hebers, Mary Cholmondley. Richard Roundell was a prohibitionist and closed the pubs he controlled at West Marton and Elslack. It’s not clear whether this included the Cross Keys. Perhaps the Bonds owned it? 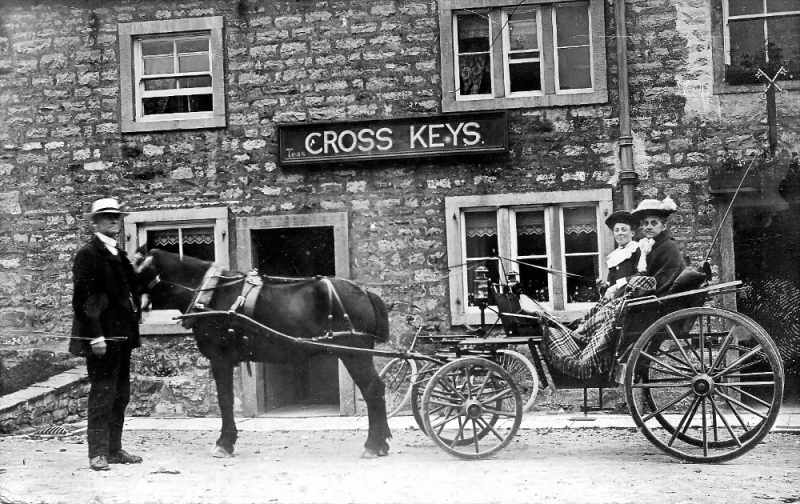 The Cross Keys in about 1900 I think.
Stanley Challenger Graham
Stanley's View
scg1936 at talktalk.net