I have had a soft spot for Elslack since 1957 when I started working for Harrison Brothers as a wagon driver. They were based at Smearber Farm, a strange name that always intrigued me. In those days, William the father was dead, Jack his son lived at the farm and his brother Billy lived in Thornton in Craven.
In later years I did some digging into the placenames and here’s what I found. The name ‘Elslack’ probably derives from the Old English personal name ‘Ele’and some known alternative spellings like ‘Ellesclac’ suggest that the slack element of the name refers to a stream and not a depression. So we can settle on Elli’s Stream or beck. Smearber is most likely derived from an old word meaning butter and ‘berg’ or hill, so ‘a hill producing butter’, another way of indicating a farm with rich pasture. These explanations are based on a lot of research and in the end are only intelligent conjecture but I’ll settle for them!
The next mention we have of Elslack is that the Romans built a small fort or way station at Elslack on their road between Ilkley and Ribchester. It is thought that it was called Olenacum. In later years some called it Fort Burwen. In Domesday (1086) ‘Eleslac’ is noted as being in the possession of Roger de Poitevin, one of William’s Norman knights. In 1318/20 Godfrey de Altaripa held the manor and was licensed to ‘kernel’ his house. This was permission to fortify it because at the time the Craven area suffered regular raids by the Scots. In 1462 one of his descendants married Ralph Radcliffe and the manor was held by the Radcliffe family until 1558 when Alice, daughter and heir of Christopher Radcliffe married William of Malham and the Malhome family held the manor.
In the 18th century the Lane-Fox family gained the manor by marriage and I think held it until the 19th century when Elslack Hall was bought by J J Duckworth, a cotton manufacturer who in 1915 bought Dotcliffe Mill at Kelbrook from the Smallpage family and enlarged it but later moved all his looms to Nelson and retired to Elslack. I met him once at the entrance to the Tempest Arms when he asked me to help him over the step into the building. He told me who he was and said he had a lot of money but would give it all to be able to step up into the pub like I could.
At one time the village had its own railway station but this closed in 1952 and of course the line was dismantled later. The last time the village came to my attention was when I was looking into German prisoners of war in the area and I corresponded with a man in Germany who served his time as a farm labourer in Elslack. He gave me this week’s picture. Next week I’ll tell you some of my stories about the village. 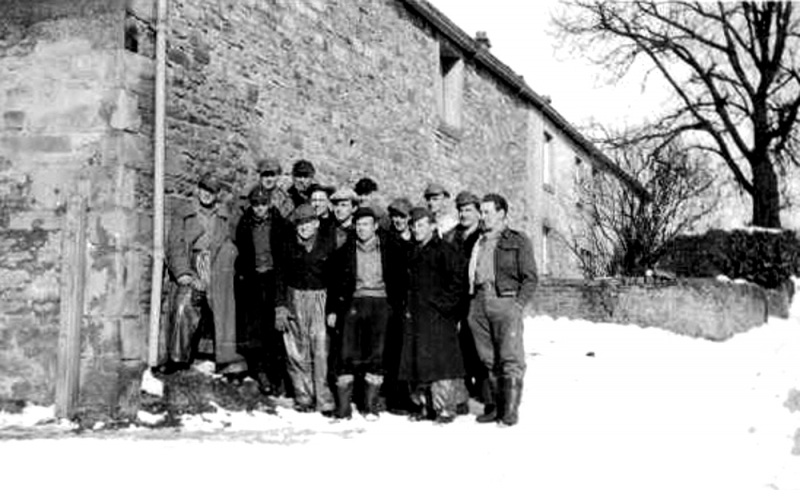 A group of German prisoners of war outside White House in Elslack in 1946.
Stanley Challenger Graham
Stanley's View
scg1936 at talktalk.net