Last week I started having a fresh look at the enclosures on Whitemoor. I am giving you my version of the map this week which is the result of many hours spent with that wonderful woman Doreen Crowther in Barrowford, we did our best and came up with this version. I’d got as far as describing the 16th century enclosures further South and East and the unrest they caused.
Up here in the wild and Woolly North West, long seen as a remote and lawless region by government, this was not the major factor. We didn't have the great landed magnates squabbling over control, we had the pressure of a rising population on food resources and this was the key driver for the early enclosures of the lower and more fertile parts of the waste.
I have always thought that the 1580 dispute between the Manors of Foulridge and Barlick was driven by this need to control the resource, both in terms of grazing and energy supplies. As I alluded last week this included water power because the same rise in population put pressure on existing corn mills which had insufficient capacity to supply a growing demand. Remember that transport difficulties precluded importing ground cereals from surrounding districts and anyway, they had the same shortages. In a Calendar of Lancashire Documents which I have we find that there was a rise in the number of illegal mills, the so-called 'pirate mills. Wood End on County Brook was one of them. In many cases the Manorial Courts took a fairly pragmatic attitude to this 'law breaking' because, like incursions on to the Waste for house building, a pressing need was being fulfilled and fines were levied instead. (Upper Hall in Barlick is a good example)
In effect these ‘fines’ were recognition and the imposition of rent by another name. Where such disputes were judged against the offenders it was usually because there was a local magnate who had enough clout to force demolition through and round here that wasn't the case.
So to go back to my original thought about the access roads, the genesis of these was the need to have access to the enclosures without crossing newly enclosed land, previously they had only been needed for access to the waste itself. In 1814 the later enclosures meant further development of these access roads and this is how we ended up with what we have now. Lister Well Lane, Folly Lane and the later development of Esp Lane which started much earlier as a medieval road across to Gisburn. They all owe their present form to the need to access the enclosures on the moor and the waste or common land that was never enclosed and is still a registered common today.
Funnily enough these articles of mine started many years ago when I wrote to the editor to correct a statement that Lister Well was a Roman Road. I suppose these two articles are the latest thoughts I have on the subject. 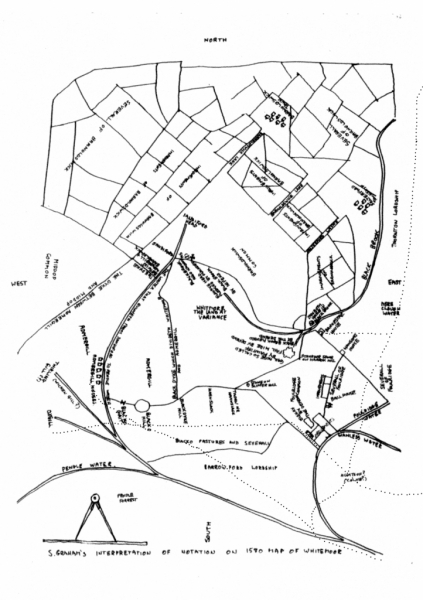 The version of the 1580 map that Doreen and I worked out.
Stanley Challenger Graham
Stanley's View
scg1936 at talktalk.net