I am going back to one of my old subjects as it has reared it’s head again. My picture is the electric clock that used to be on the front of the Council Offices on Post Office Corner. It was replaced by a fancy clock on top of the new bus shelter. The old clock was very reliable but I'm sorry to say that its replacement has not been as good. For months it has been stopped but recently was restarted. So far so good but unfortunately it was five hours adrift. It appears to be slowly correcting itself and is improving but at last sight was still about four hours out.
That's the current situation but what triggered me in the first place is that the Council Office clock had some history behind it. Go back to a time before the mid 19th century when time was not as important. People regulated their lives by the sun and if they were near a church, the sound of church bells signalling a service. Some of the better off had clocks but these were not accurate or reliable and there was no easy way to set them at the correct time. In 1840 the electric telegraph was invented and within ten years private companies had set up systems where they would, for a payment, transmit personal messages.
In 1870 the General Post Office took over control of all existing private telegraph services on the grounds that the government had a monopoly on all forms of public communication. Apart from the railway telegraphs which were not affected, this meant that the Post Office also had a monopoly on the daily time signal which was transmitted each day from Greenwich Observatory. This coincided with the start of the factory system which required good timekeeping in order to function. From then on all post offices had a public clock that had to be visible from the street outside and this was the first time the public had a means of setting their own clocks and watches accurately.
There was a problem, Railway time was derived from a different source and did not coincide with Post Office time. The mill engineers relied on the time relayed to them by the Manchester Men who travelled to the exchange in Manchester each day and they set their watches by Railway time. This led to a situation where the engineers were starting their engines before the workers had arrived as Post Office time was always behind railway time.
I have evidence from the Calf Hall Shed Company minute books that they instructed the engineer to run to Post Office time and not Railway time to correct the situation. At the same time he was taken to task for striking a coal carter over the head with a shovel but that was a different matter..
Today every electronic gadget tells us the time so public clocks are no longer essential. The funny thing is that I don’t think people are as punctual now. 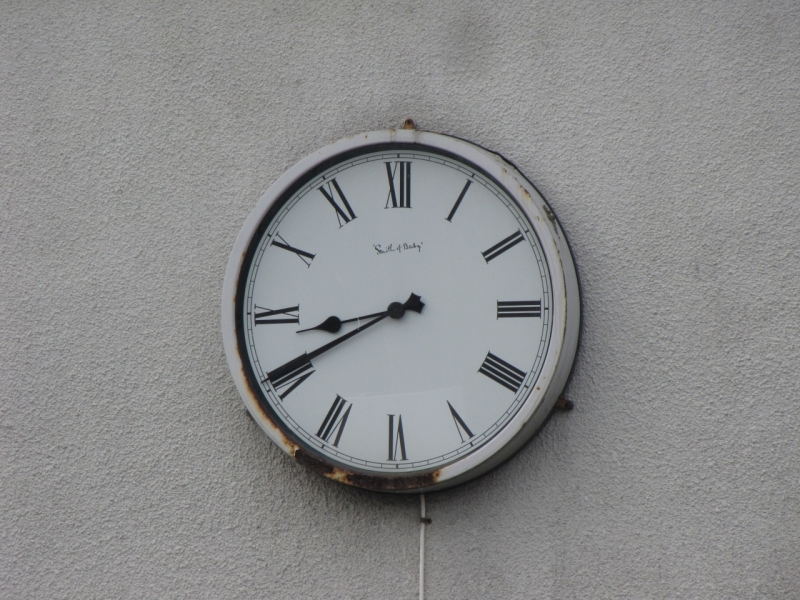 During our holiday in Purbeck we visited Durlston Castle. I took this photo of a big plaque on the outside wall which shows the effect of longitude on place times. For the sake of consistency I've also posted a second photo of their other plaques which shows tide times at various places and also the effect of convexity of the ocean when viewing a vessel at sea. It's interesting to me that Paris is shown as having a clock time 9 minutes earlier than Greenwich because that is similar to me sitting here in Taunton, about 9 minutes after Greenwich time.

[Click on the images for larger versions]
You do not have the required permissions to view the files attached to this post.
Top

There is an Icosahedral Sundial, (20 sided) in Marsden park Nelson, one of only two in the country, which shows the time round the world. How it manages to cast the appropriate shadow for say Australia I don't know.
. 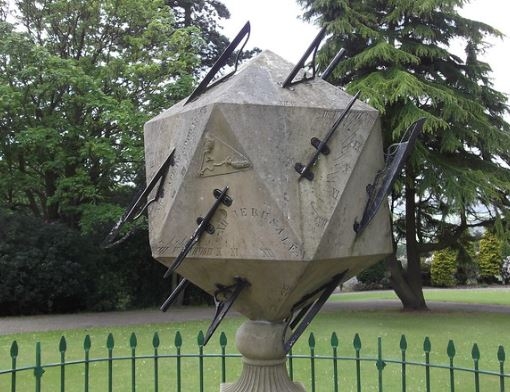 I've never seen one of those. For it to be practical the earth would have to be transparent!
Stanley Challenger Graham
Stanley's View
scg1936 at talktalk.net

It only requires the antipodean gnomon (style) to be set at a compensating angle for it to indicate the correct time. Hence the Icosahedral design, each gnomon for each time zone is set at a different angle relative to the sun.
Ian
Top

PanBiker wrote: ↑
29 Sep 2019, 09:58
It only requires the antipodean gnomon (style) to be set at a compensating angle for it to indicate the correct time.

True, but the ones under the Icosahedral never see any daylight in the northern hemisphere. If they were place on top you could compensate for the time difference by quoting AM or PM. I have taken several photos of this dial which has the names of the places covered on each face. Marsden park also has another 'standard' dial which doesn't quite fit the longitude that is quoted on the dial. Richard Walton was quite a collector of odds and ends which were built into the park On a sunny day its well worth a couple of hours having a look round.

On an amusing side, a relative of mine said that her great aunt was a frequent visitor at Marsden hall, very posh and la-di-da. Later I found it used to be a lunatic asylum.
Top

I'm intrigued by the number of page views for this article, twice as many as usual.....
Stanley Challenger Graham
Stanley's View
scg1936 at talktalk.net

Combining both sundials and clocks. This picture shows the plaque on the Towneley Hall buttress wall.
. 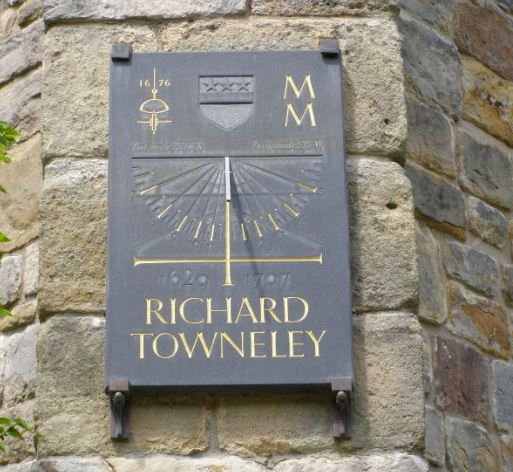 .
This was a millennium plaque and as you can see was taken at 10 past 1 pm. This particular sundial is set facing south so that there is no correction for being out of alignment with true south. The plaque also pays tribute to Richard Towneley , 1620 to 1707, who first suggested the clock escape mechanism to give what is now known as the dead beat escapement. Previously especially on long case clocks with long pendulums the second finger would bounce backward slightly due to the design of the escapement. A reference to this invention is shown in the top left hand corner of the plaque dated 1676. A replica of the clock can be seen inside the hall.
Last edited by plaques on 03 Oct 2019, 21:22, edited 3 times in total.
Top

That's the first dial I have ever been able to read clearly!
I see we have reached 112 page views.... Very strange.
Stanley Challenger Graham
Stanley's View
scg1936 at talktalk.net

I think you will find that it is the fact that the article has comments that ramps up the page views. Many others in the Stanleys View forum are the same. Bots are more active on threads that exhibit changes by the way of comments.
Ian
Top

By `comments' do you mean posting with a quote from the same thread?
Top

No just the fact that it has replies. Bots look for changes, so if an article has no replies it will be left alone. As soon as it has replies the bots visit to update. I have always said that we should be able to suppress bot hits on the post counts as they skew the data so you cant see proper feedback of activity. You could when we had a statistics module on the site.
Ian
Top

So you agree it has had a lot of page reads?
Stanley Challenger Graham
Stanley's View
scg1936 at talktalk.net

Not necessarily, the post hits are governed not only by direct reads but the exponential increase in bot hits the more replies an article gets. As I say, without discounting the bot hits you cant get a proper hit count on the posts.

If you look at many of the other View articles with no replies they all have around 50 to 70 hits. Any with replies have a lot more which is increased by bot activity, it's the nature of their purpose on the site. The older and more popular threads with lots of replies will be grossly skewed with bot activity because they are never away from scanning the frequent changes.

I could turn them all off for an experiment, that might settle the issue.
Ian
Top

It's only an issue with you Ian. I am fine with it.
Stanley Challenger Graham
Stanley's View
scg1936 at talktalk.net

So am I Stanley, no issue here. You posed the question and I am only pointing out the mechanics of the site and how the bots skew ALL post counts.
Ian
Top

Hopefully to add to the number of 'hits' on this subject here is a photo of the second Marsden Park sundial.
. 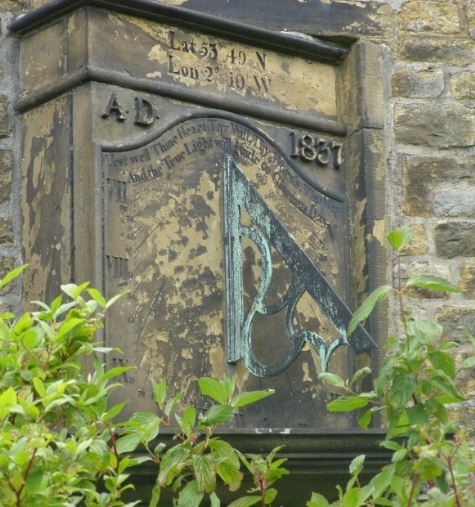 .
Walton of Marsden Hall was a big fan of sun dials and encouraged (paid for) their installation in various locations in Nelson. The exact whereabouts this particular one was first located isn't known, the longitude/latitude positioning quoted on it would suggest it was intended for somewhere locally but an exact position is debatable. Dated 1837 would indicate it was in use before public clocks became a reliable means of indicating the time. To achieve the correct shadow from the genome it has been placed at an angle in its current window setting so that it faces directly south making the hourly divisions equal .
Top

The people who designed them must have been good mathematicians! I wouldn't know where to start!
Stanley Challenger Graham
Stanley's View
scg1936 at talktalk.net