My picture is of Abel Taylor and his son David in the barn at Greenbank on old Gisburn Track in 1956. Sorry about the quality, this was before I had good cameras. However, I’m glad I did the image because it tells us so much about a life which has vanished in the last 60 years.
Greenbank wasn’t a large farm and Abel farmed it single handed with help from his neighbours who in turn helped him. He had a horse, Dick, and his only concessions to the internal combustion engine were a 1930 Austin Heavy Six car converted to a small truck and a small petrol engine on his mower. I was there to help him with the harvest which until 1956 had been traditional hay-making but that year Abel had decided to make silage and we cut and stacked 60 tons of grass in the mowstead of the barn by hand. Yes, before you ask, it was cruel hard work but had the advantage that it didn’t rely on good weather to get a result. Abel found he had made one bad mistake, the stack was against the party wall to the house and the juice from the silage penetrated the wall and ruined all of his wife Maude’s new wallpaper. He lined the wall with old corrugated iron sheets for his next crop! But the main thing was that the silage making was a success and while he still made a small amount of hay he made silage every year afterwards.
Notice the box that he is sat on. This is an old fashioned meal kist, the slope at one end was to make it easier to get in with a shovel to get the meal out when feeding the cows in winter. You might be able to see that Abel is wearing clogs, David also has them and in those days I wore clogs as well. They were all made by Alf Whiteoak who at that time farmed White Moor Bottom Farm on Standing Stone Lane. Like many farmers at that time he had an extra string to his bow and made good clogs.
I am stood in the main door of the barn to take the picture but notice that behind Abel is another barn door. This was because there was a way out the back of the barn so that carts could be driven straight through. The byre is on the right and above it are the baulks where hay could be stored and dropped through holes into the cow stalls below. This meant that in winter when the cows were in the byre most of the work could be done under cover. A byre full of beasts is surprisingly warm in winter and was a very cosy environment.
This used to be the standard local farming practice but today it is all long gone. It’s a forgotten corner and I’m glad I did the picture. David must be about seventy years old now, it makes me feel old! 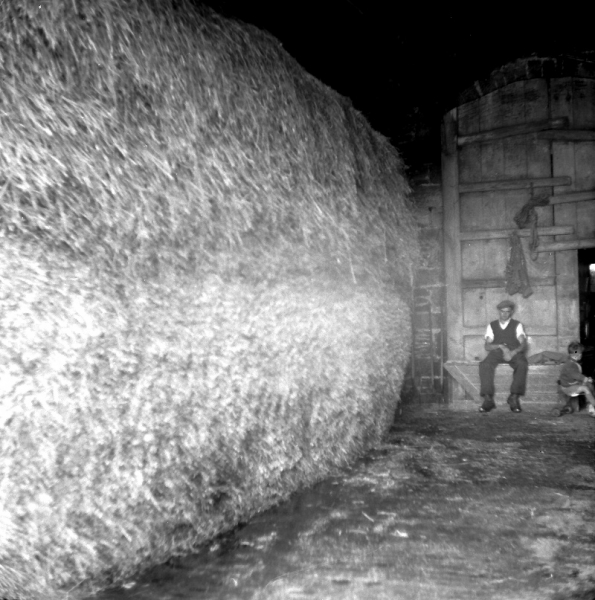 Abel Taylor and David in the barn at Greenbank Farm in 1956.
Stanley Challenger Graham
Stanley's View
scg1936 at talktalk.net

With silage, it's important to compress the greenery and cover it, to keep the air out and the temperature up. If not, some of it goes off instead of fermenting properly like sauerkraut. These days farmers tend to wrap round bales in plastic, or compress a bulk stack, cover it with plastic sheeting and weigh it down with old tractor tyres and the like.

Do you remember, how Abel kept the silage in good condition in the barn? Or did he just pile it up and discard the part that got mildewed?

I'm curious, because we were discussing this very topic in the pub last week, and nobody could agree how their predecessors used to make it.

Just left it open and when he cut into it discarded anything not good as waste. He liked it and carried on doing the same thing so he mustn't have wasted much.
Stanley Challenger Graham
Stanley's View
scg1936 at talktalk.net

Thanks, Stanley. That's what I figured, more or less. It must have been good stuff. I can't imagine a good Yorkshire farmer wasting fodder

It's been a while since I've visited the site. I've spent a lot of the last couple of days reading through your memories. Many thanks for posting so much interesting material.

What you wrote about a shed full of beasts being a warm place reminded me of a school exchange visit to France when I was a kid. My oppo's blind(!) grandfather grazed sheep and cattle up on a high mountain plateau. His old house was divided into two: half for living in, half for the stock, which lived indoors during the worst of the winter. When I naively asked why the animals were effectively kept in his house and not in an outbuilding, he answered "chauffage" (central heating)!
Top

Common practice in single hall dwellings Chris and it made sense when you think how cold and draughty those old buildings were!
Glad you enjoy the writing, thanks.
Stanley Challenger Graham
Stanley's View
scg1936 at talktalk.net

Perhaps the methane from the burping cows helped to keep the house fire burning too!

I notice that this article has suddenly got legs, a lot of people reading it. Not viral but gratifying.
Stanley Challenger Graham
Stanley's View
scg1936 at talktalk.net