I have always said that time and further research alter the view of our town’s history. Today’s subject is a case in point. As so often happens it was triggered by a question. This led to debate and contributions form other local historians, my friend Wendy Faulkner from Earby and Ken Ranson. The consequence has been clarification of this small aspect of the town.
The question was a request for information from an off-comed un about the Craven Working Men’s Home. This completely foxed me because I had never heard of it but Wendy and Ken started digging and we now have this small corner of Barlick history illuminated.
I started by suspecting a connection with the Artisan’s Lodgings in Butts, the Model as it was known locally and now the Model Joinery Works of Briggs and Duxbury. Perhaps we need a quick recap on the lodging houses. When the cotton boom got going in Barlick late in the 19th century a problem arose. There were more looms than local weavers to run them. The consequence of this was that weavers came in from out of town and took lodgings during the week. Every spare room in the town was used and pubs like the Greyhound acted as lodging houses as well. In addition Barlick attracted tramp weavers. These were itinerant weavers with no fixed abode and were often very good, all had personal reasons for taking up the life. The way the system worked was that each morning, before starting time, tramp weavers would gather in the warehouses of mills and if a weaver missed turning in to run their looms the tackler for that set would pick a tramp weaver and put him on that set. They were all men and often regulars at a particular mill so they were known to the tacklers. If and when the regular weaver turned up they were sent home for the morning or all day. Which it was largely depended on how good a weaver they were. If the tramp weaver was known to the tackler as a good one they got the full day. I think you can see why this system was liked by the manufacturers, it was a useful sanction on weavers, promoted punctuality and ensured that all their looms were producing cloth. When it became obvious that there was a gap in the market early in the 20th century, private capital stepped in to fill the need. Two large lodging houses were built in Butts, the large Model and the building we now know as the Central Garage. It is the latter that concerns us but first I’ll tell you what I know about the history of the Model.
As usual I have run out of space. I’ll finish the history of the Model next week and then go on to the Central garage. I haven’t forgotten that what we are actually after is the Craven Working Men’s Home! I promise we’ll get there. 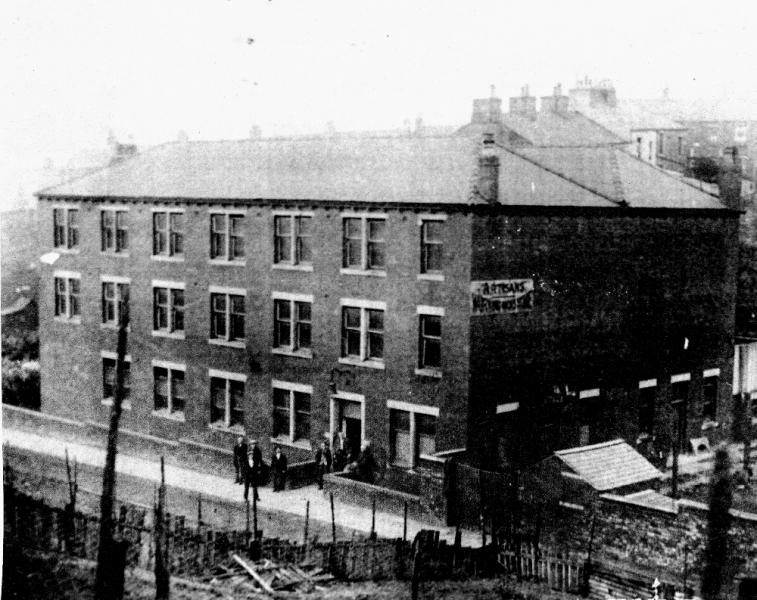 The Model Lodging House in Butts in about 1920.
Stanley Challenger Graham
Stanley's View
scg1936 at talktalk.net