I love this old postcard of Greenberfield Locks. There is so much information embedded in it. However, what's on my mind this morning is the overall effect of the canal construction round about 1800. It must have been an earth-shaking event (Sorry about the pun!). Large numbers of navvies descended on the district and cut a big hole right through the town. That was disturbing enough but consider the effects. 40 tons of canal boat could travel drawn by just one horse! Up till then the biggest loads we ever saw were the timber drags exporting large baulks of wood from the town to places as far afield as Clitheroe and beyond Skipton, we have firm evidence for this trade. Leaving aside the enormous consequences that access to the Yorkshire and Lancashire coal fields made to us there was also the small matter of disputes that arose between land owners and the Canal Company who had to be hard-nosed about maintaining progress. These disputes were largely private and remain hidden.
One such dispute was between John Bagshawe of Coates and the Company which ended in the Company simply ignoring him and driving through the Greenberfield section anyway. Luckily we have some good evidence, ‘A Study in Engineering History: Bagshawe versus the Leeds and Liverpool Canal, 1790/1799’ by R B Schofield. Printed in the Bulletin of John Rylands Library, University of Manchester. Autumn 1976.
John Bagshawe inherited the joint estates of the brothers William and John Bagshawe in November 1791. One of these was Coates Hall in Barnoldswick. The Coates Hall Estate included tenanted farms at Coates Hall, Greenberfield and Coates Flatt. He owned the Corn Mill and worked Greenberfield Quarry. His uncle William Bagshawe who was in possession of Coates in 1770 when the first plans were being made for the canal, realised that he owned the nearest limestone to Lancashire on the line of the canal. (Greenberfield and Coates lie on the limestone side of the Craven Fault, which divides the grit stone to the south of Barlick from the limestone to the north.) Around 1770 he constructed a ‘deep drain’ to dewater Greenberfield Rock and during negotiations about the canal passing through his land he negotiated with John Longbottom of Halifax, the Canal Co’s principal Engineer and Surveyor for an ‘arched road’ under the waterway to allow the drain and a road to the quarry to pass. Longbottom agreed to put this before the general committee of the canal and assured him it would be ordered. (9 Sept 1770)
In 1790 when canal plans were revived, the tenant at Greenberfield was Thomas Thornber and at Coates Flatt, Peter Hartley. Peter Hartley attended a meeting in Colne on 24/11/1790 and reported to John that it appeared plans had changed and his underpass was not to be built. This plus the rough way the contractors treated the locals as digging commenced seems to be the start of JB’s troubles with the L&L Co. There is more but I’ve run out of space! 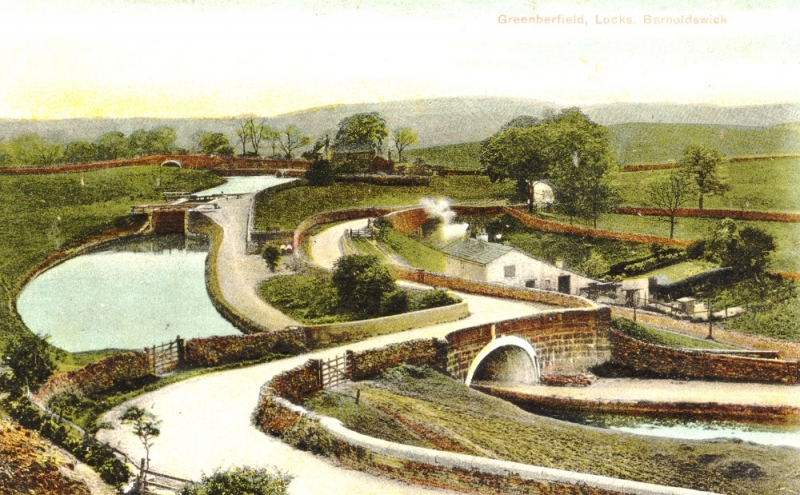