John Bagshawe, owner of the Coates Estate is having a bit of bother with the canal company. Read on.
The canal company proposed to do away with what was the existing Skipton Road at Greenberfield and take the line down the east side of the canal to Gill thus saving two bridges and in the process, destroying JB’s plans for his quarry. He also learned that the underpass for the drain was not to be built. John believed that the lime in Greenberfield was better quality than that in Gill Rock Quarry opened by Colonel Farrand shortly before 1790. He suspected that the company wanted to prevent him from exploiting his quarry as they had their eye on opening a quarry of their own. In later years when Canal Co. bought land from Mr Parker at Rainhall for a quarry it seemed he was right. Schofield thinks however that it wasn’t deliberate, just shortage of capital putting pressure on the company to make least accommodation roads and bridges.
Bagshawe went to Joseph Outram [1732-1810] a consulting engineer who was to act for him until John’s death in 1801. The matter was settled by a payment from the Canal Co to JB, or so it seemed at the time. The Canal Co seem to have gone ahead with their original plan which was to divert the Skipton Road down the east side of the canal to the existing Greenberfield bridge. They built the bridge and after a period of worsening relations a discussion was held on 11 Nov 1797 with the canal co reps in a pub in Barlick and JB in Coates Hall, communications were by notes! Not surprisingly, it ended in deadlock. Round about 1798 a new tenant, John Waite moved into Greenberfield and obstructed the new road with hurdles and brushwood. They stopped the road over twenty times but the Canal Co threw it down each time.
Late in 1798 Benjamin Outram came to inspect and reported on ‘Mr Bagshawe’s estate on the Banks of the Leeds and Liverpool Canal.’ By February 1799 Bagshawe had won his case against the Canal Co. The canal co built the accommodation bridges for Eastwood and Banks but seem to have put only a ‘swivel’ bridge in on the line of the old road. No trace of this remains and the present road follows the new line put in by the Canal Co.
After this victory John Bagshawe died in Staines on 21 August 1801. The Greenberfield Quarry was never exploited, the canal company’s road line to Greenberfield survived and is the road we see today. The new quarry at Rainhall prospered, as did Farrand’s at Gill Rock.
That’s my window on this part of our history. We are so lucky that Mr Schofield took the trouble to research it and I couldn’t have told the story without his help. It is almost certain that there were many more disputes like this one, land owners did not take kindly to developments cutting their estates in two! Think about HS2…. 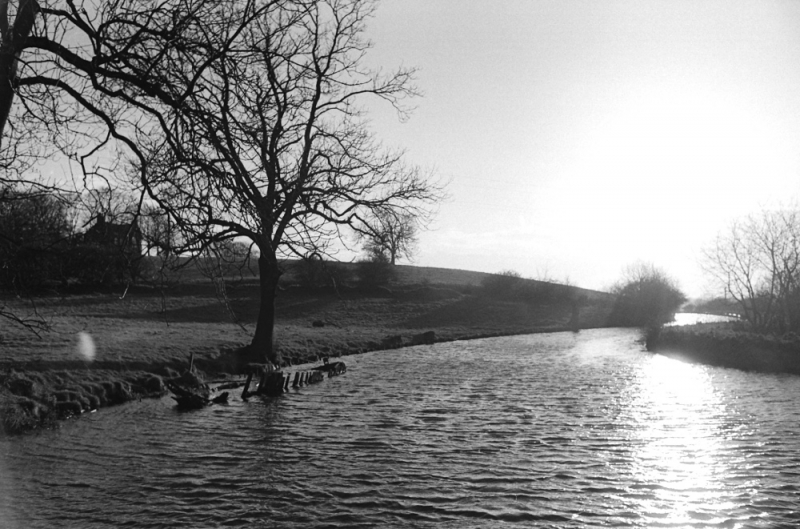 This is where the old road crossed the line of the canal.
Stanley Challenger Graham
Stanley's View
scg1936 at talktalk.net