Getting old is a funny game. One aspect of it is that you look at the state of your wardrobe and have to decide whether it is worth spending money on say a new coat or do you soldier on muttering “It’ll see me out.” I reached the point where my children were demanding I go shopping because some of my favourite items were, in their words, “disgraceful”. There is of course another matter, for the last year I have been learning to live under the threat of cancer which could be a factor.
In the end I had to give in and acknowledge that my kids were right. Anyway, going shopping could be seen as a sign of an optimistic view of the future. That’s how I have found of late how much prices have changed! Boots that I bought forty years ago for £14 are now over £400 and the price of good socks made my eyes water. Once I had given in I was attacked over my waterproof Helly Hansen jacket bought in Minnesota twenty years ago for about £25. I was dragged into Eric Spencer’s in Ilkley and persuaded that a German Schoffel coat that was on sale for half price was ideal. I tried it on and they were right, it was a good coat. Then I enquired what ‘half price’ was and was informed it was £140! After a moment’s thought, I bit the bullet and bought it. A few weeks later I have to say that it was the right choice, it is 100% waterproof (plenty of testing for that of late!), very light and comfortable and I am enjoying it.
However there was one consequence I hadn’t foreseen. The Helly Hansen coat was bright yellow, the Schoffel is a beautiful shade of dark forest green. So what? I found out last Friday morning when, half way across the pedestrian crossing on Skipton Road opposite the school, I realised that the car coming swiftly down from the town centre and turning into Skipton Road showed no sign of stopping! He did manage to stop but got an earful from me for not paying attention and missing seeing me on a well lit crossing.
I still think he was at fault but it shook me and I gave the matter some thought. I was definitely not as visible in the new coat as I was in the old so I used my head and got a reflective harness which is now standard dark morning walking gear for me. I have checked with drivers and they tell me it is very efficient and reflects well in headlights, you can’t tell yourself because you are looking at it from the wrong angle.
It makes sense to recognise that not everyone is giving their driving 100% attention and it makes sense to shift the odds in your favour by making yourself as visible as possible. I recommend that you all take a moment to consider this. I certainly feel safer! 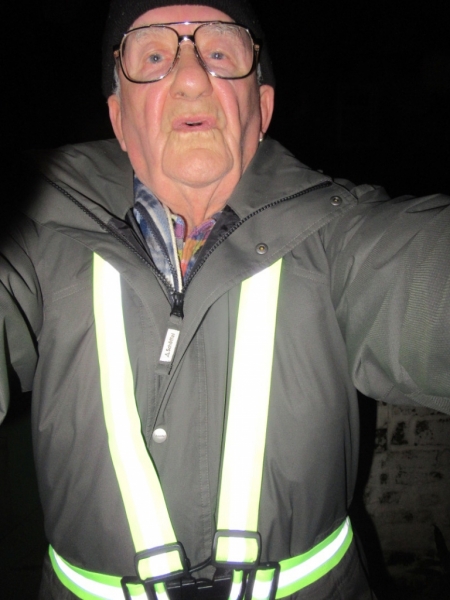 While strictly car drivers must give way to pedestrians on crossings, or intending to cross, many modern cars have a tint to the windscreen and poor visibilty can mean pedestrians are not clearly visible, same applies to window pillars, these cover both pedestrians and the bollards so if you are not unreasonably looking elsewhere on the road ahead for other hazards you can miss other things. Its best to always make eye contact with approaching drivers.
Top
Post Reply
2 posts • Page 1 of 1