Leaving aside the pie-makers who are still working in the town we have lost our local bakers. We can find good bread and confectionery but as far as I know, none from Barlick. There was one specific trade, the ‘backstone bakers’. This word derives from ‘bake stone’ which was an open smooth stone heated by a fire underneath and was a very ancient form of baking, almost certainly used before ovens. Later the stone was replaced by a thick cast iron plate which conducted heat better and could be smoother. Still heated from underneath it was used for making crumpets, oat cakes and ‘oven bottom’ muffins, a type of teacake.
The last backstone baker in Barlick was Stanley’s Crumpets. They were still in business next what used to be the railway sidings in 1982 when I did my picture. Barry Sharples worked there as a lad and I’m grateful to him for the information he gave me.
First the crumpets. The batter was made in a huge round container, which was then covered with a cloth to await fermentation. This was done under maximum security, they were always concerned about the recipe being discovered. There were two large gas heated backstones which were covered with greased crumpet rings, and the batter would be ladled in. When the surface of the crumpets had bubbled up and just lost their moist appearance they were turned over with the aid of a cranked palette knife and a deft flick of the wrist. Once the surface, now at the bottom, had acquired a light golden colour it was time to lift them with the palette knife, two or three at a time, onto the cooling racks. Later the rings were lifted off and they were stacked into piles of eight in tissue lined cake trays.
Stan and Walter also made Scotch Pancakes and Oatcakes. Scotch pancakes were made with an egg batter in a similar way as crumpets but without rings or hoops. This gave them a lack of uniformity, although the practised hand ensured fair portion size.
The Oatcakes were made much differently. A thin oatmeal batter was ladled onto an oat flake strewn linen belt which with a flick of a hand-wheel moved the belt and threw the batter on to the hot backstone dusted with oatmeal. This made an elongated thin oval, which was dried in a hot cupboard until rubbery firm. This is how most of them were sold and they were sold door to door or via other retailers. The customer took them home and dried them on a rack hung from the ceiling in the kitchen. Some were sold ready dried to pubs and ‘stew and hard’ was a staple bar food.
I’m sorry we have lost oatcakes, it’s years since I saw them. They were a good healthy staple food and very filling. You can still buy the modern version which is like a round biscuit but I’m afraid they aren’t a patch on the old ‘made in Barlick’ oatcake! 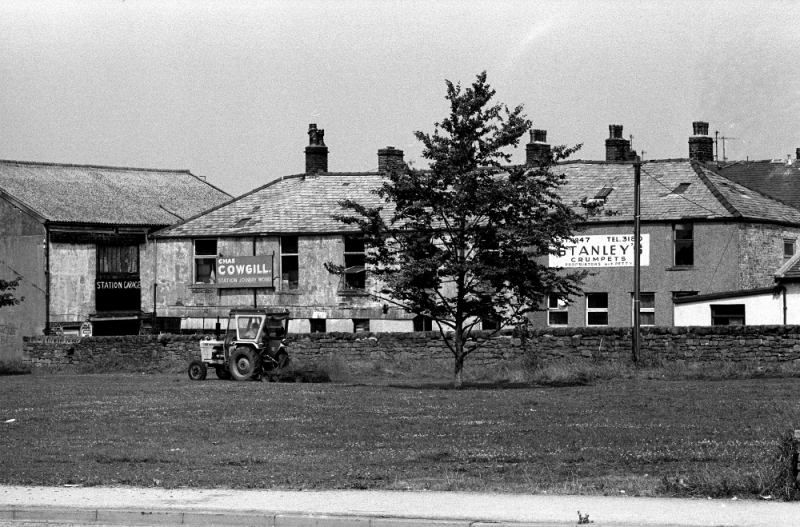 Stanley’s Crumpets in 1982 on the side of what had become the Green.
Stanley Challenger Graham
Stanley's View
scg1936 at talktalk.net

Stanley wrote: ↑
13 Dec 2019, 08:50
Leaving aside the pie-makers who are still working in the town we have lost our local bakers. We can find good bread and confectionery but as far as I know, none from Barlick.

We still have a local bakery Stanley, what was Liddell's is now the Artisan Bakers, different name but still operating from the Gisburn Street bakery. They do a whole range of artisan breads including gluten free varieties as well. Their main business is bread but they also do a cakes and pastries.
Ian
Top

We have a new branch of Oddies down here in Foulridge, not immediately local but there are some very good smells coming out of the door.
Kev

I agree they are good Ian. I didn't know they were a Barlick Bakery, thanks for that!
Stanley Challenger Graham
Stanley's View
scg1936 at talktalk.net

I've made crumpets! They are fun to make...
Top

Are you acquainted with https://www.oatcakebaker.co.uk ? It's very informative and has photos of the oatcake-making process.

I came across it when trying to find out how to make oatcakes, stimulated by the accounts of the itinerant non-conformist minister, Rev Peter Walkden, who was active in Craven in the early 18th C. He noted that certain houses were particularly agreeable to stay over at, due to the good quality of the oatcakes! (you can read extracts of his diary via Google Books). I recall as a small boy in the 1960s visiting relatives out in the sticks who had an old kitchen range with drying racks above. At the time, I thought that was a mucky place to be drying clothes. Only now do I realise that the racks were, more likely, for drying oatcakes.

Not too long ago, you used to be able to get stew and hard on Burnley market. I went from there to watch the Clarets play QPR in the Championship (a dreadful 0-0 draw with horizontal sleet blowing in off the top). Just looked it up, it was in 2011. The half-time Benny-and-hot was very welcome!

The picture in the Bakehouse Tour where it shows the gas pipe running across the chimney breast reminded of our old family home where the pipe left the gas meter, ran across both the wall and chimney breast, through the adjoining wall and into the single kitchen/living room to the new gas oven. Since the routing was through the 'parlor' it was camouflaged with strips of matching wallpaper wrapped round it. Years later it was buried into the wall. Very posh.
Top

Stanley wrote: ↑
13 Dec 2019, 08:50
The last backstone baker in Barlick was Stanley’s Crumpets. They were still in business next what used to be the railway sidings in 1982 when I did my picture.

The last owners and operators of Stanley's Crumpets was Betty Wordsworth, cant remember exactly when they finally closed.
Ian
Top

I have an index card on that but space prevented putting everything in the article. I have looked to see if Barry Sharples' evidence is on the site but can't find it so I shall Post it again.
Stanley Challenger Graham
Stanley's View
scg1936 at talktalk.net