I was bragging in last week’s piece about the age of Barlick, or to be more accurate, settlement in this area, the name Barnoldswick or one of its variants came much later. These estimates have at times caused raised eyebrows but I have good reason for saying it.
At one time my mate John Clayton and I spent a lot of time on Blacko Hillside looking for clues we could relate to the 1580 map of Whitemoor. We roamed all over the tops there and eventually made sense of the map but in the process we found other signs as well. Things like the Black Dike, a very ancient boundary that we put down as tribal and that took us back over 2,000 years. We found eroded field boundaries as well and they signified settlement and farming up there of about the same age.
It was John who spotted something else. He found what we think are disturbance marks that were cut across by the 2,000 year old boundaries so were evidently even earlier. These puzzled us and after a lot of discussion we arrived at a conclusion that satisfied both of us. We decided that they must be traces of an even earlier activity pattern. It’s impossible to put a firm date on these based on what we had seen but we both agreed that we were looking at evidence of human activity that dated back many thousands of years.
This raised another problem. We know that approximately 10,000 years ago our part of the world was subject to glaciation and any evidence from that time would be planed off by the advancing ice. However, this assumes that the glaciers were so powerful that they obliterated everything. My argument was that flowing ice behaves like water but on a much longer time scale and just as a rock in a stream can divide the flow and poke its head above the surrounding water level, it was possible that a hill like Blacko Hillside could have had the same effect and divided the ice flow, after all we knew that we were at the Southern limits of the main glaciers and it was reasonable to suppose they were getting thinner.
This is only a theory but both John and I agreed it was a possibility and whilst we couldn’t ‘prove’ the hypothesis it was worth taking into consideration and if we are right, the marks we found under the 2,000 year old features could be more than 10,000 years old. Many years later I still believe that this is a possibility and it’s my basis for suggesting that we had human activity in the area much earlier than we previously thought.
But nothing is simple and like good researchers we tried counter arguments against the theory. There were two main ones, was there cultivation that long ago? We decided that there were other ways of marking the landscape like trackways. Then we asked why at that altitude when there was bottom land available? That’s what I’ll address next week… 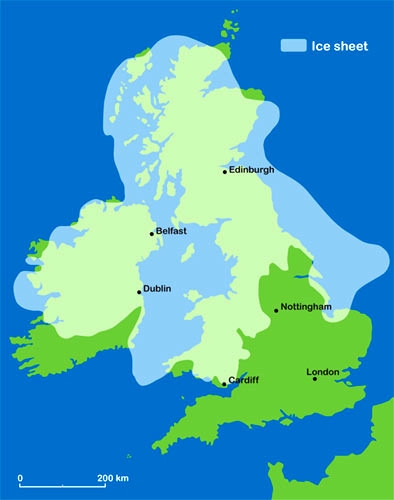 Our popular conception of what the Ice Age was like.
Stanley Challenger Graham
Stanley's View
scg1936 at talktalk.net