Last week I was explaining how I arrive at the possibility that our area had human habitation over 10,000 years ago. I’ve justified the question of the glaciers but hadn’t got round to the matter of how these inhabitants left traces on the landscape.
The first thing to say is that we are not talking about settlement due to agriculture. Most archaeologists agree that an approximate date for this in Britain is approximately 3,500BCE. However, some researchers have identified patterns of activity that, whilst not settled agriculture, suggest earlier management of the landscape to improve its productivity in terms of hunter gathering, things like establishing cleared areas round waterholes to improve the chances of hunting, burning areas to encourage the growth of more productive plants which in turn increased the number of small game and edible plants. This in turn stimulated group cooperation and the rise of tribalism. At first these were just extended families but then these combined into larger units.
Once such a grouping had established itself and invested effort in an area it made sense to stay put and this would mean making provision for shelter. Eventually these groupings produced what we now recognise as hamlets. The question is when and where this stage was reached.
One of the things that strikes me about modern archaeology is the number of times we see ‘discoveries’ that suggest change happened earlier than we previously thought. The traces of activity that John and I identified on Blacko Hillside could be evidence of these very early changes in survival strategies. There is therefore reasoning that supports ‘when’ being earlier than we thought. But what about ‘where’?
When I first started to look at settlement I made an assumption that settlement would start in the lush valley bottoms sheltered from the weather and near running water. I soon found that this was a mistake. The most likely places were part way up a South facing slope where the land was better drained and in winter was less likely to suffer the most severe frosts. Frost flows downhill into the bottoms, this is where the frost traps are. As it happens, half way down Blacko Hillside fills all these requirements, south facing, well drained and less likely to be frost bound. There was also the defensive aspect, a little height gives a better oversight of the surrounding land and therefore earlier warning of the approach of strangers.
None of this is definitive proof of my assertions but taking the whole picture into consideration I think we can be safe in saying that there is a good chance there was semi-permanent occupation of some favourable land before ‘agriculture’ and nothing we know says this couldn’t pre-date the last Ice Age. It is almost certainly the case that it was established at the latest as the glaciers retreated. This is why I continue to believe that our remote ancestors had ‘settled’ here a lot earlier than we originally thought, as early as 10,000 years ago. Our history is lot older than many think. 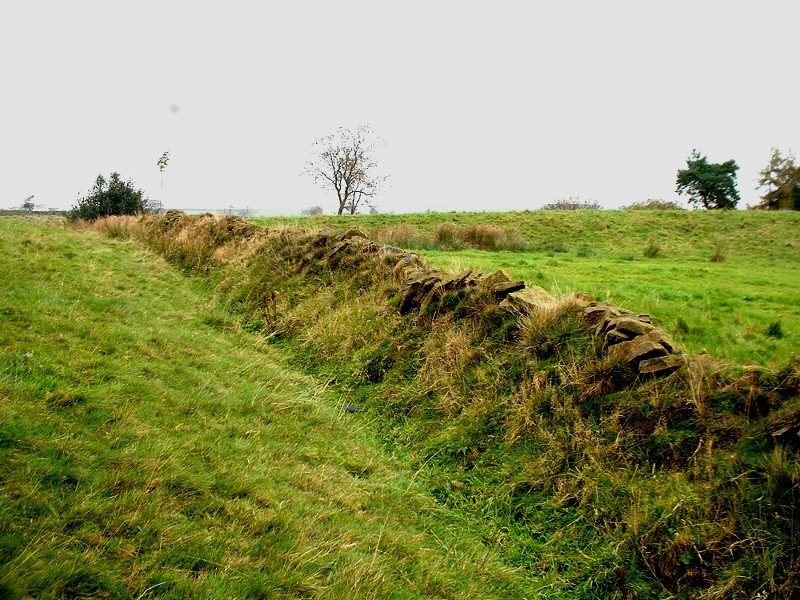 One of the old boundary wall we found above Hollins on Blacko Hillside.
Stanley Challenger Graham
Stanley's View
scg1936 at talktalk.net

Re: SOME VERY ANCIENT HISTORY 02

I enjoyed that Stanley, you make a lot of very good reasoning.

Re: SOME VERY ANCIENT HISTORY 02

Thanks Cathy. I call it 'flying an intelligent kite'. I don't see how the evidence John noticed could be interpreted in any other way.
Stanley Challenger Graham
Stanley's View
scg1936 at talktalk.net