As is often the case, a question that arose has led to some concentrated digging and I unearthed so much material that the original query about the Barnoldswick Mechanic’s Institute broadened out into a flood of information about the area round Jepp hill. It included more information about cloggers, I can’t get away from them! So what started as one article has become a bigger project and I have decided to tell the story. The problem is, where do we start? I’ve decided to kick off with Jepp hill and let the story unfold from there.
If you stand outside what used to be the Seven Stars, now a funeral directors, and look across the road you can see how the lie of the land with the hill rising steeply towards the end of King Street makes it a natural amphitheatre, I have noted before that it was used for town gatherings and religious events. This is quite appropriate considering its later history. It was also used for political meetings. My mate Ernie Roberts who was a tackler at Bancroft and lived in the Wapping area all his life told me about a meeting on Jepp Hill in 1932 during the height of the More Looms disputes. It was called and led by Jimmy Rushton a noted agitator and member of the Communist Party (Barlick had one of the first branches in 1921). It was decided to march on Dotcliffe Mill at Kelbrook to ‘knock the belts off’ because they were employing ‘blacklegs’, non union labour. That enterprise ended badly when the police ambushed the marchers in Kelbrook but that’s another story!
In 2005 I talked to Eric Parker about Jepp Hill in the 1930s. He said that the on the site where there is now a car park there was a three storey building with a shop on the bottom floor and a couple of cottages above. The shop was at one time a clogger’s but during the 1930s was Martins the plumbers who later moved to Butts Top and when they did the shop became a lady’s hairdressers run by a lady he thinks was called Leticia, ‘Lettie’ for short. Walt Fisher told me that Phineas Brown, the man who had Matt Hartley’s abandoned baths on Sagin Hill where he ran an electrical business, lived in one of the cottages. The buildings below the Cross Keys which were demolished to widen the road were cottages and Catlow’s barber’s shop. Tom Duckworth said that ‘Pop’ Hill, the founder of the Clarion Cycling Club in Barlick had a clogger’s shop there. This is the man who was killed in an accident near Ribchester and there is a memorial form for him still on the side of the road at the top of the brow near Yarlside on the Bracewell to Horton road. The building opposite these cottages with the ornate pediment was Holmes’ Pie shop and the shop next door below the Seven Stars was the Council surveyor’s office.
See what I mean about the evidence? I shall return next week! 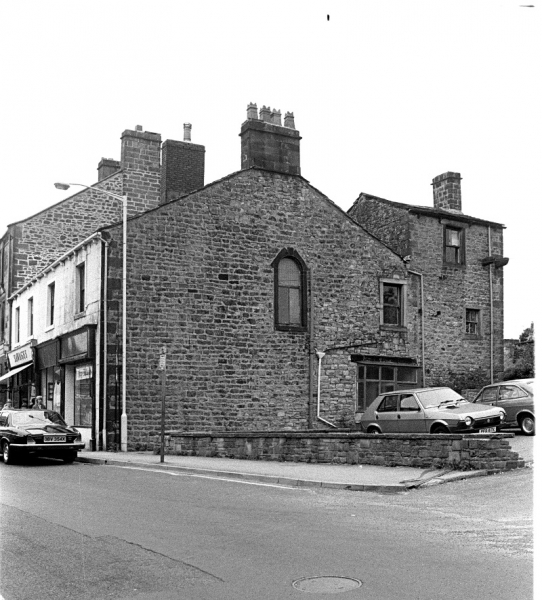 The three storey building was still there in 1982.
Stanley Challenger Graham
Stanley's View
scg1936 at talktalk.net