There is one particularly imposing building on Jepp Hill, what we knew for many years as the Council Offices but this is only part of the story. Let’s go back to the beginning.
In his book ‘Old Barlick, Atkinson tells us that a Wesleyan Chapel was built on a site at the top of Jepp Hill, said to have been a deed of gift from a Mr. Smith of Thornton Hall in Craven, and owner of the plot of land on which the Chapel was built and conveyed 31st of October 1806. This is our building and at a later date it was enlarged to include a schoolroom.
In 1852 a Mechanics Institute was founded and met in a room above the National School in Butts which later became the Pigeon Club. The local education board objected to this after a few years so the Institute moved to a room above the stables of the Commercial Inn in Green Street. In 1879 they purchased the Wesleyan Chapel and moved in there letting some space to the Yorkshire Penny Bank. We are told they had a large lecture hall, reading and smoking rooms and a regular class was held to teach all aspects of the textile trade. The large hall was occasionally let out for other entertainments and functions and the Institute was on the whole a success.
We have to jump sideways here and look at the management of the town. Until May 14th 1890 the town was run by the Skipton Rural District Council but on that date a Local Board was sanctioned by the West Riding County Council. The first meeting of the board was on the 26th of November 1890 in the large parlour of Wellhouse Farm on Church street which was then the Post Office. In 1895 Wellhouse Farm was sold and redeveloped as shops and the Board moved to the Craven Bank Chambers.
In 1894 the Local Board became Barnoldswick Urban District Council and in December 1899 the Council borrowed £1000 and bought the Mechanic’s Institute for £373. As far as I can make out this was the demise of the Mechanic's Institute, it appears to have been wound up. The building officially opened as the Town Hall on December 21st 1900 and continued in that role until local government reorganisation abolished the BUDC and we came under Pendle in 1983. I have an idea in my head that the building continued as Council Offices until they moved to the Council Shop on Post Office corner. As you can see from my picture, the building now has another use, it has been converted into flats.
So there you are, a simple question about the Mechanic’s Institute developed into enough evidence for three articles. In the course of following the story we’ve brought to the fore a lot more vital town history. I hope you look at Jepp Hill with different eyes now and the nice thing is you could take any little area in the town and find just as much history. 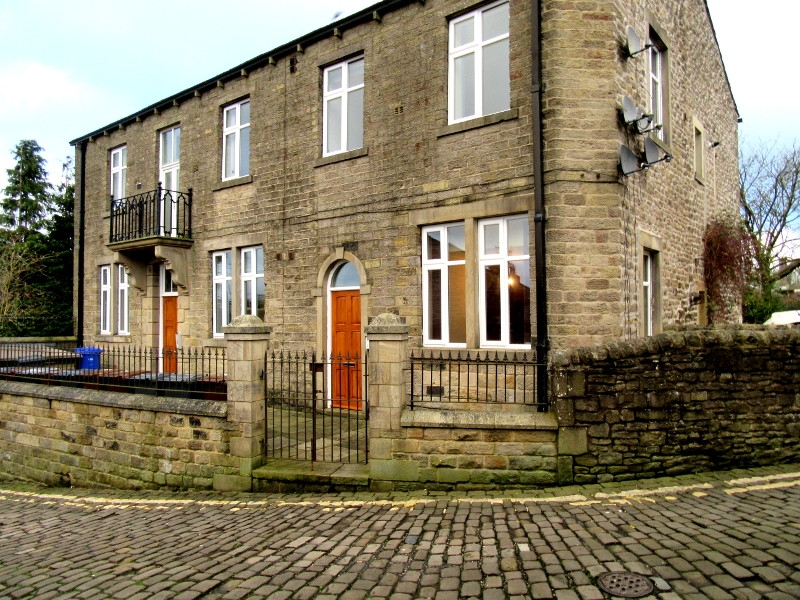 The building as it is today.
Stanley Challenger Graham
Stanley's View
scg1936 at talktalk.net