It is impossible to examine the history of Barlick without running into a dominant 19th century figure, William ‘Billycock’ Bracewell of Newfield Edge. I have written extensively about Billycock and his activities and if I was to re-publish that it would take a dozen articles. That was all twenty years ago and I have found new information. In order to understand the history you need a précis of the story so this week I will start with that.
A bit of background. Thanks to Doreen Crowther’s wonderful ferreting in the deeds and wills which she shared with me and the combined researches of Julie Cheche in America and Ann Battersby here at home I can trace the Bracewells back to William Bracewell (died 23/02/1595) of Salterforth, wife was Grace who died 7/02/1597. His son Henry , no birth date, married Helen Hartley in 1613. 8 children and William (1657) married Ann Acornlee in 1685. They had four children and the eldest son, William (1693) of Salterforth, yeoman, married Ann Hudson in 1713 and is noted as dying at Coates in 1767. Ann died at Coates in 1764. (Note that this was almost certainly Coates Home Farm and not the hall.)
William and Ann had ten children. His second child, Christopher was born in 1716 and died at Barnoldswick in 1763. He married Elizabeth Thornton in 1737 and they had five children. The third, William of Coates born 1756 had four children, William in 1782, Sarah in 1785, Christopher in 1787 and Mary in 1799. This grouping was crucial to the story because it was here that the Bracewell Schism started. Whatever the gene is that controls sibling rivalry, it was running strongly here.
We need to step back a few years here to note the activities of William(1756). I have evidence from a very good researcher in the United States whose family have been researching their Bracewell ancestors for 50 years that in 1803 William built a water twist mill in Barnoldswick on land he owned at Coates. This is what I describe as Old Coates Mill to distinguish it from the later Coates mill next to the canal that replaced it c.1865.
Round about 1810, Christopher(1787) left Coates and the family business and moved to Thornton Hall Farm, Thornton in Craven where he married Ann Smith, daughter of George and Ann Smith of Thornton. Mary, his first child by Ann was born in 1812. In 1813 William (later Billycock) was born and in the same year Christopher and Ann moved to Earby and built Green End House.
Long before Christopher (1787) died, William(1813), the eldest son had moved to Burnley and gone into partnership with his brother in law Samuel Smallpage who had married his sister Mary(b.1815). He was in cotton manufacture but built up the contacts that in about 1860 led to him going into partnership with a man called Griffiths and buying the Marsland Ironworks, Burnley, built in 1817. Griffiths dropped out of the partnership shortly afterwards.
To be continued next week! Too much information. 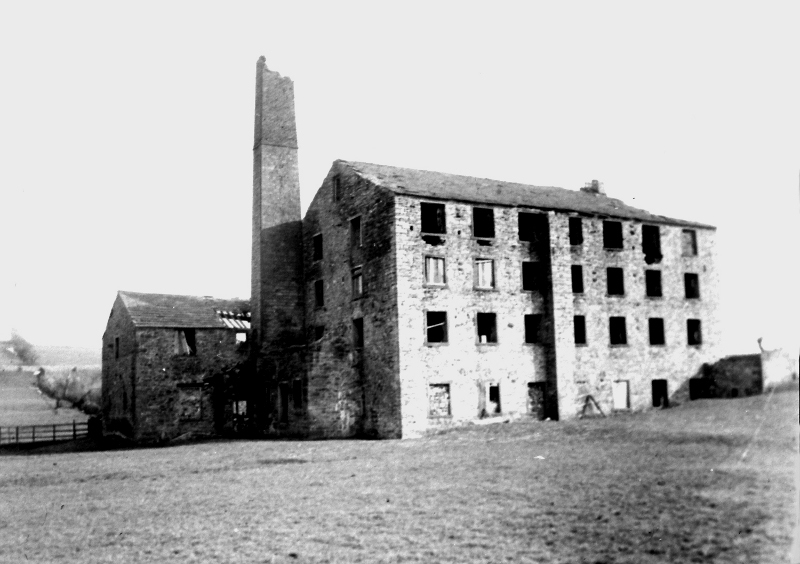 Old Coates Mill in 1890 just before it was demolished.

[I've just noticed something that has never occurred to me before. That chimney has had an extension added to it. Not unusual in the early days of steam engines, people hadn't quite cracked the formulae for sizing chimneys and often underbuilt them as they tried to get away with as cheap a job as possible. There are many such examples. We shall come across this later in this series but for a different reason. In this case I'd say it was a consequence of not building it high enough to get the draught they needed in the first place.]
Stanley Challenger Graham
Stanley's View
scg1936 at talktalk.net