A community site for Barnoldswick & the surrounding area
https://www.oneguyfrombarlick.co.uk/

by Stanley
This double article marks the last day of publication of the Barnoldswick and Earby Times. We are told this is temporary measure but I don't think we will ever see it return. The days of the local paper have gone. Never mind, I shall carry on writing articles..... This is just the end of one era, another one beckons!

If you remember last week’s article about the fall of the Bracewell empire, we are at the stage where a very determined woman, Elizabeth, widow of William Metcalfe Bracewell is attacking William Bracewell to get her money out of the partnership, William Bracewell and Sons.
The bottom line here is that from what I know now, the partnership simply couldn’t afford to pay her out. William(1813) was in trouble and he knew it. As she was leaving the office he called her back and asked her to go with the book-keeper, Mr Eastwood, to Burnley to see Mr Matthew Watson who was an auctioneer. After some discussion over the next few days during which Matthew Watson described Mr Bracewell as being ‘very indignant’, William(1813) gave Elizabeth four promissory notes on his personal estate amounting to what was owed together with a promise to pay 3% interest and told her that this was the best surety she could have. This meant that Elizabeth was guaranteed an income of £650 per annum, a rise of £400. The full amount of interest was never paid and there is little doubt that the subject was boiling up again when on the 13th of March 1885 William(1813) died. From here on in, it was all downhill.
William Bracewell’s will of the 10th of March 1885 is a complicated and revealing document. He had controlled everyone during his life and was evidently going to carry on doing the same from the grave. There are so many trusts and sub-clauses that it is almost impossible to see how it would all work even if the estate was in good shape. As it happened, this was not the case and all his carefully laid plans came to nought.
Christopher George Bracewell(1846) was in effect the sole partner. George Robinson, the manager of what was now the Craven Bank must have made an assessment of the position taking into account his confidence in Christopher’s character and abilities. He acted immediately and seized the assets of the partnership so that the bank could liquidate them and draw back what was owing. What followed was a fire sale that lasted for more than six years. The net effect was that as far as I can see, the partnership shares were almost worthless. The question that occurs is how Elizabeth fared in this dénouement. In June 1888 she took her case to the Chancery Court at Wakefield. In essence she was suing the executors of her father in law’s will for £21,500, the acknowledged estate of her deceased husband plus interest owing.
The executors of the will were Christopher George and two of Elizabeth’s brothers in law, Smith Smith a solicitor and Joseph Henry Threlfall, a wine merchant, both of Colne. There was bad blood between Christopher and both these men, indeed, I get the feeling that they were advising Elizabeth but I have no direct proof.
I’ve run out of space again, to be continued next week! 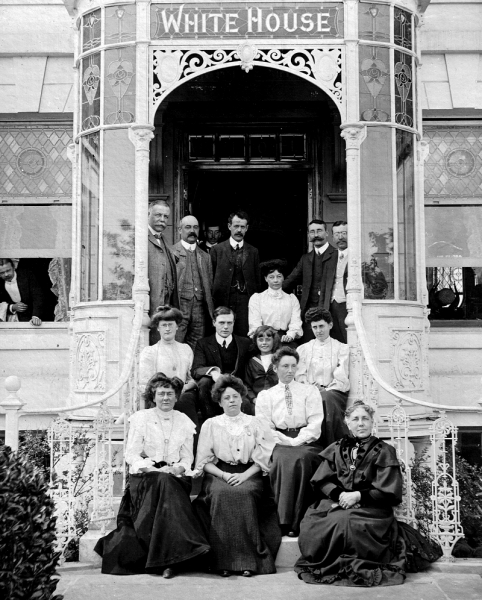 Elizabeth Bracewell, a determined woman! She's on holiday with her family here.


We left Elizabeth Bracewell, the widow of Billycock’s eldest son, William Metcalfe, in court at Wakefield fighting to get her inheritance out of the partnership of William Bracewell and Sons.
The nub of the case was whether the money owing to Elizabeth was a charge on the assets of the partnership or whether, by issuing promissory notes on his personal estate, William(1813) had accepted the responsibility himself. In effect he had bought Elizabeth’s share. One significant thing that came out in the hearing was that no proper audit of the partnership had been carried out at either William Metcalfe’s death or his father’s. The figure of £19,500 was a guess, it had no basis in law.
I can’t say with certainty what the decision of the court was. I’m not even sure the case went any further because in effect Mr Justice Kekewich told the parties to go away and do a proper accounting and make a decision between themselves. All I can tell you is that there is a note on Billycock’s will which states that his personal estate was valued at £18,640 gross and Nil net with no leaseholds. In effect, this industrial giant had died a bankrupt. It looks as though Elizabeth may have won the day.
However, we have the evidence of our picture this week of Elizabeth in later years with her grandchildren. I would say she looks like a woman with a family and no immediate money troubles. It would appear she salvaged enough out of the wreck to survive and proper and I am glad, I have a soft spot for this woman even though I would not like to be on a charge before her if she was a magistrate! As for the wreck of the partnership, in terms of the rest of the Bracewell family it was a disaster, they lost everything. Christopher, the youngest son died in 1889 almost penniless.
Billycock’s second wife, Mary Whitaker eventually regained her home at Newfield Edge but only after legal arguments which seem to have finished with the death of Christopher George. On the subject of Newfield Edge, it’s only recently that I solved a long term puzzle about the house. I ‘knew’ that Billycock bought it and moved in round about 1845. It was only when I read The History of the Baptist Church in Barnoldswick that I realised that Billycock never owned the house. It was bought in 1837 from the Mitchell’s, who built it in 1770, by the Reverend William Fawcett when he came to Barlick as pastor. He lived there until 1845 when he rented it to William(1813). The house was in the Fawcett family’s ownership until 1914 when it was bought by Joseph Slater who had married Billycock’s youngest daughter Ada Whitaker Bracewell(1865) in 1887. Apart from one possible break during the litigation, Ada lived at Newfield Edge from birth until she died on the 8th of May 1959 aged 94. Nice to see that in the end someone prospered! 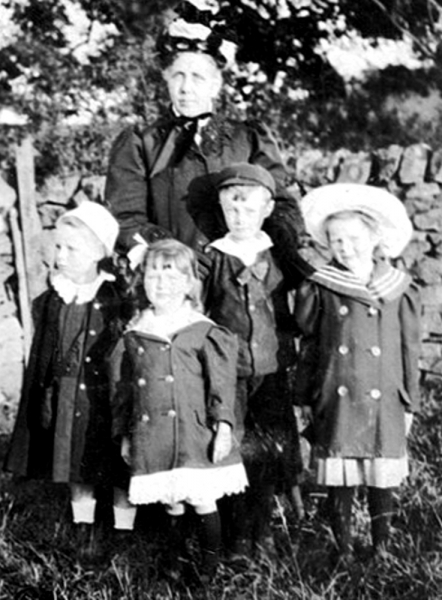 Elizabeth Bracewell with her grandchildren in later years.
All times are UTC
Page 1 of 1