On February 13th 1870 a great opportunity opened for the town, the Barnoldswick Railway opened for business and for the first time in the town’s history, long distance passenger transport became possible. Up till then, the only way to get out of the town was to walk or cadge a lift with someone who had business outside the town and owned a horse drawn conveyance. It became possible, not only to travel for business but pleasure also, relations in nearby towns could be visited and holiday times were transformed for those who could afford the fare.

Barlick was well served in that the station was in the centre of the town. Everyone lived within ten minutes walk. Some towns weren’t so lucky, you might have an hour of a walk simply to get to the train. In 1880 Cowling was in this position. It was three miles to the station at Crosshills and using the train meant a three mile walk there and back. Bad enough if you were setting off for a trip but even worse if you needed to use the train to get to work. In inclement weather it became even more of a problem. What was needed was local transport to the station.

A man called Ezra Laycock was the postman in Cowling in the 1880s and he realised that there was an opportunity here to add another string to his bow. He started an occasional service to the station with a horse and trap and prospered. By 1895 he had bought a horse-drawn wagonette and was running a regular service to Kildwick as well as providing carriages for weddings and funerals. He ran this service for ten years and it proved very popular. One regular passenger was a boy whose education at Keighley Grammar School was paid for by the people of Cowling. Ezra’s contribution was free transport to and from the station. His name was Philip Snowden, later to become ‘The Iron Chancellor’ in the first Labour government.

Legend has it that sometime in 1905 Ezra overheard some business men talking about a new innovation in London, the first motor buses ever seen in England running regular passenger carrying services. Later that year we find Ezra in partnership with a Mr W Stephenson of Skipton and ordering an 18 seater motor bus from the Milnes-Daimler Company of Hadley in Shropshire, and going to London to pick up the new vehicle from the body-builders. They drove it back and at Kildwick met one of Laycock’s wagonettes ready to start off for Cowling. The passengers were transferred to the bus and that day the first motor bus service arrived in Cowling.

I have to insert a note of caution here. Many years ago I was told that Laycock’s had the first motor bus in Yorkshire but since then I have found a reference to a similar vehicle being involved in an accident at Knaresborough in 1902. The only problem with this is that if it was a Milnes-Daimler, this seems doubtful as the company was formed in November 1902. Whatever the truth, nobody can deny that Ezra Laycock was one of the pioneers.

There were dire predictions about safety and reliability but the new motor bus was an instant success. By 1906 Laycock and Stephenson of Cowling were ordering a second vehicle from Milnes-Daimler, this time it was a double decker and could carry 49 passengers. The firm was doing well but Ezra wasn’t the only man with foresight in the area. In 1905 The Silsden Motor Bus Company started a service and shortly afterwards in 1906 a Mr C Chapman of Grassington replaced his horse-drawn mail coaches with motor vehicles. Neither of these firms survived the frenzy of competition in the 1920s. The Silsden firm was taken over by the West Yorkshire Road Car Company and Chapman’s buses went bankrupt.

What was happening in Barlick? When did we see our first bus? The opening of the Barlick branch line to Earby had opened up travel into Lancashire or Yorkshire and it would appear that there was no great pressure for another form of local transport. In addition, the railway companies were very quick to object to a bus service that competed with their traffic. The first mention I can find of buses running into Barlick is in the early 1920s when Premier Motors set up in Earby and ran an Earby-Barnoldswick-Skipton service. This firm was started by John Tempest, Jim Cowgill and J W Smith. Two of the drivers were John Griffin and John Smith from Earby. John Griffin, in his autobiography, says that he was paid £2-10-0 a week.

Premier soon had competition from Castle Motors based in Sackville Yard at Skipton who ran a Skipton to Barlick service as well. This was owned by Jim Wynn, John Rimmer and Bill Morris. The fare between Skipton and Barlick was 9d single and 1/5 return. (roughly 4p and 7p). John Griffin left Premier and went to work for Castle motors at £3 a week. He says that the Premier Terminus was the Conservative Club and Castle used the forecourt of the Seven Stars.

Meanwhile, Ezra Laycock had been expanding. In 1912 W Stephenson left the partnership and taking in his two sons, John and Rennie, the firm traded as Ezra Laycock and Sons of Cowling. In 1926 he ignored the General Strike and this resulted in him gaining a route into Keighley. On 25th July 1927 Laycocks started a new route between Colne and Cowling via Earby, Skipton and Kildwick. On 25th of March 1928 they bought out Premier of Earby and brought the Barnoldswick to Skipton route into the company. Laycock’s had arrived in the town.

The 1929/30 depression hit Laycocks hard and on 23rd of October 1933 the newly formed Burnley, Colne and Nelson Joint Board took the firm over. Ezra retired to Morecambe and it looked like the end of the firm. Barlick Council persuaded BCN to allow Laycocks back and two months after finishing Laycocks were in business again with the Barnoldswick to Skipton service trading as Ezra Laycock Limited and John and Rennie Laycock’s sons, Roy and Donald entered the firm. Rennie and Donald left the firm in 1952 and in August 1961 Laycock’s took over Silver Star Motor Services, Mr J T Hey’s company. This brought the Skipton to Carleton route in and some workers services.

1964 saw another expansion when Barlick Station closed. The firm bought its first double decker for forty years and eventually had three running on the Skipton Schools service. This was the last expansion. As well as the regular routes and school services, Laycock’s ran a service round Coates and works buses for Rolls Royce. In 1972 Ezra Laycock Limited was sold to Pennine Motors, Mr Simpson’s bus company in Gargrave and on the 11th of August the last green bus pulled into the West Close garage yard. 67 years of service to the travelling public was at an end.

I am indebted to two authors for most of this article, one is J B Griffin’s 1979 autobiography and the other is a small book written by Philip Lingard in 1975, ‘First Bus In Yorkshire’. Though they differ in some of the details, they have given me the confidence, together with information from local people, to write this account. There is one brilliant picture of a group of buses in about 1925. John Griffin was working for them at the time and gives the names of the drivers so I’ll leave you with the line-up. From left to right, John Laycock, Arthur Overend, Eric Chew, Billy Reader (the strongest man in the garage!) John Griffin and on the end, William Overend, son of Arthur. 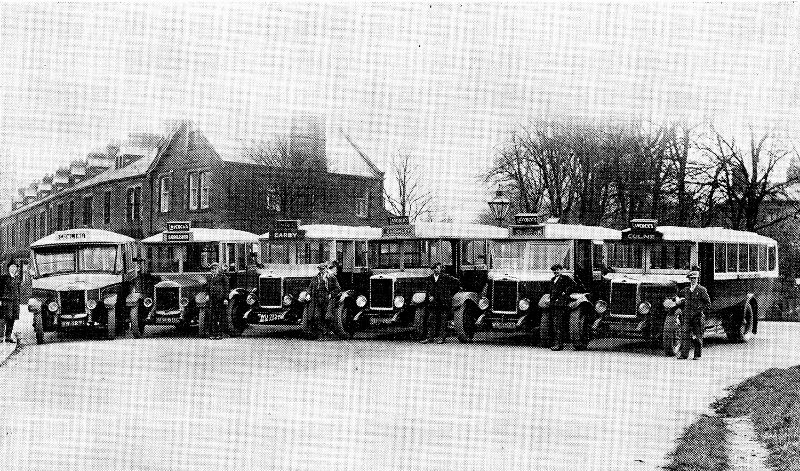