I've been unable to submit images in some of the gallery topics. When I clicked on New Image I got an almost blank page saying "You may not submit more than 10 images", nothing else. Example topics are Other Interests/Other Interests and Other Subject Matter/Other Subjects (Misc).
Nullius in verba: On the word of no one (Motto of the Royal Society)
Top

I have just uploaded a couple of images into the Other Interests/Other Interests album. Same image, first with my admin permissions and second using your permissions Tiz (I can take over those and browse the board with them). I can't reproduce the error though. It worked both times as expected.

All the permissions on all the albums and sub-albums should be the same, I set them all on one and then copied them en-block to all the rest.

The board is currently set to allow a maximum of 10 images at a time at each upload session. You should not really get that error unless you try to exceed this limit in one go, certainly not on a single image.

Is it exactly the same error each time and does a different fiesize make any difference?
Ian
Top

Not noticed any problems here... Tiz and I share the same OS and browser.
Stanley Challenger Graham
Stanley's View
scg1936 at talktalk.net

Still doing it. Warning shown below. I don't get as far as selecting a file to upload, it happens as soon as I click on `NewImage' at the top of the chosen page. E.g. go to Gallery, click on the sub-forum Other Interests in the Other Interests forum. Click the NEWIMAGE button with the asterisk alongside it, and it gives the warning... 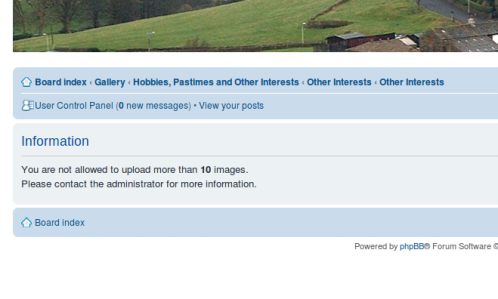 Had another look at the permissions Tiz and I think I have found the problem. Not a straightforward fix as I will have to reset the permissions on all albums. Might not be able to get to it tonight but will post in here again when I have done the lot.

I have altered it on the single album featured in your screen capture above, it should work in that one now.
Ian
Top

Sorry to report back...no it doesn't work for me.
Nullius in verba: On the word of no one (Motto of the Royal Society)
Top

Can you try again Tiz, there is a bit of an ambiguous setting in the Gallery permissions which are separate to the main site permissions. I have reset them all again so, if I have it right, you should now be able to post.

Can you please clear your cache by using CTRL+F5 before trying to upload, let me know what happens.
Ian
Top

Both buttons now work. Thanks Ian, well done! And to prove it, I know you like motorcycles so here is a photo submitted using the first button. It shows my mum & dad on his m/c together with the little girl my mum minded while her parents were at work, I'd guess late 1950s. 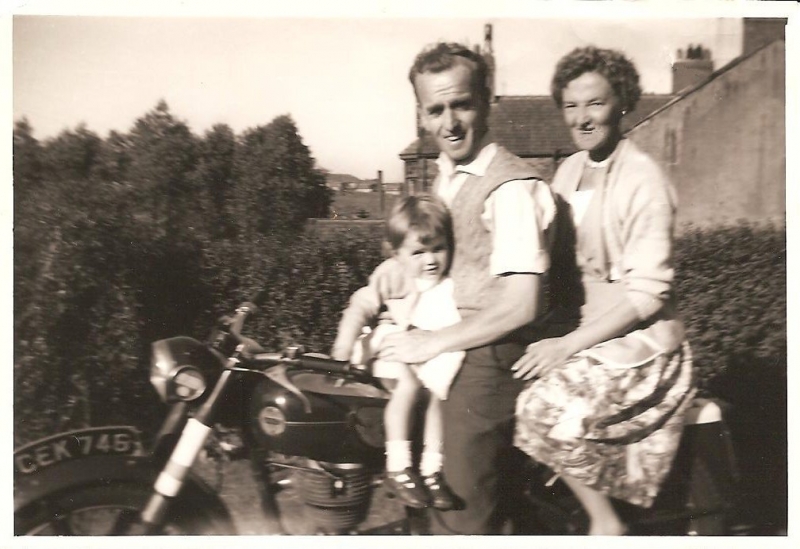 And the bike was first registered in Wigan EK. Surprising what you remember from a long time ago.

BU - Oldham, DK - Rochdale, DB - Stockport, NA NB NC etc - Manchester. That covered most of the known universe at the time.
Born to be mild. . .
Top

Excellent Tiz, would that be a BSA C15 by any chance? I assume 250 single or under with the L plate on the front fork. Badge not very distinct but the head looks right.
Ian
Top

Pressed control F5 and the page reloaded. What does 'clearing the cache' mean?
As I remember, JA was the first Stockport registration.....
Stanley Challenger Graham
Stanley's View
scg1936 at talktalk.net

A Wigan origin but somehow made its way to Blackburn! Thanks for that extra bit of info,Tripps.
Ian, perhaps BSA...but could it be a James? The L plates puzzle me as my dad had a full car licence and I assume that meant he could ride an under-250cc bike too without plates. My first and only motorbike was a James (would it be about 195cc?) and I would have needed L plates so I wonder if he had it first and the photo was taken when I was learning to ride it? (If it is a James!) I wish I had Stanley's acute memory!
Nullius in verba: On the word of no one (Motto of the Royal Society)
Top

Jame Captain perhaps Tiz, does that ring any bells?

Car and bike licence was separate, up to 250cc or unlimited with sidecar on L plates then unlimited solo when you passed your test. The small bike on a car licence came in later and covered mopeds and the like.
Ian
Top

Looks like it was my dad's bike with plates then...which makes more sense because, after more thought, I realise that at the time of the photo I would have been too young to have a motorbike. I can't remember the name `Captain' but the bike looks right so maybe I got the bike later on. It was a deep red-maroon colour. At another time Dad had an Ariel (650cc?) combination and he, mum and I went from Blackburn to Brixham for our week's summer holiday on/in it - bow-legged at the end of each journey! I did a google for James bikes and found this page which I think you'll enjoy:
http://www.realclassic.co.uk/jamescaptain.html
Nullius in verba: On the word of no one (Motto of the Royal Society)
Top

A good link Tiz and you can wander off to other makes and models as well. My first bike was a 1958 250cc Royal Enfield Crusader that I bought as a non runner for £40.00 with a loan from my dad. Premise of cheaper travel to work. Learnt to ride on that at 16 and did most of my falling off, my worst one as well when I came off on a newly chipping surfaced road. Very hard and abrasive landing! My mum went mad and told me to get rid before I killed myself, took no notice and my next bike was a brand new Honda CB250 Twin, started every time, no oil leaks and did all and more than it said on the tin. Lots of fun on that bike, passed my test on that, Sally and I did the length and breadth of the country on that rallying at weekends.

Doubled up on size again for a lot more grunt to a Honda CB500 Four. More length and breadth of the country a bit faster, kept that till we got married by which time I had passed my car test and had a works van. Bikes not very practical once you have started a family so I sold the 500 four and had a 27 year lay off then until I was 50. Kids flown nest so time for a bit more fun, bought the bike I still have now, Honda ST1100 Pan European. Continent eater at very efficient cruising speeds, 100BHP and 156mph if you want, cruise all day at 100, just the job for end to end France. V4 and shaft driven, very low maintenance bike. I had rider/pillion Intercom into helmets, MP3 player in the side fairing pocket and Sat Nav with voice assist on the handlebars. all audio into the helmets and muted by voice if you wanted to converse. A lovely bike used to be the mainstay machine much beloved of the cops and paramedics. 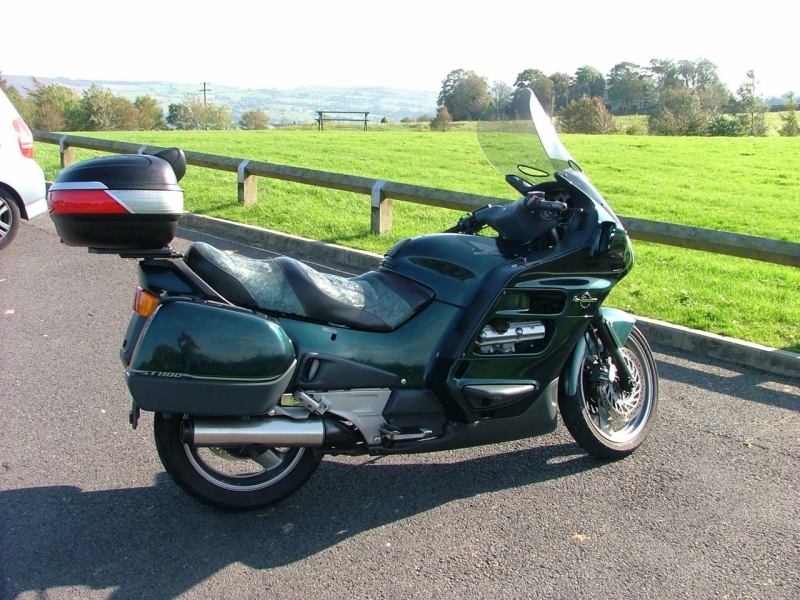 End of a second era it will be on the market in Spring, for the record it has just less than 31K on the clock, nowt for one of these.
Ian
Top

Stanley wrote:Pressed control F5 and the page reloaded. What does 'clearing the cache' mean?
As I remember, JA was the first Stockport registration.....

Yes you're right of course. It's DB and JA, I didn't know that. Here's the full list that some kind soul has compiled. Reg No's

I'd forgotten that the modern form of numbers had a geographic element to them too. Fascinating.

And some were county registrations, I had WX2929 for many years, old West Riding registration. John Edward Hall, a dairy owner at Lancaster bought the first 30 JEH registrations off Stoke on Trent council and used them on his vehicles. I had JEH 28 and Danny Pateman had JEH 29, both on AEC tankers we got from them when they amalgamated with Associated Dairies. My first wagon was TWY 972, my last was TWY 136L (Registered in Brighouse). I thought it was a nice coincidence, that was in 1972 so they were still using the old registrations then.
As for driving licences covering motor bikes, When the driving licences were altered (about 1950?) anyone who already had a licence was automatically given 'All Groups' on grand dad rights. My licence, 1954 didn't cover bikes and tracked vehicles I think. HGV licences came in around 1960 and again it was on grand dad rights because prior to them coming in all you needed was a car licence. Even with my HGV licence (later changed to Class 1) I wasn't licensed for motor bikes.
Stanley Challenger Graham
Stanley's View
scg1936 at talktalk.net

UA and UG belonged to Leeds, WE and WA to Sheffield. Funny how every registration from childhood sticks firmly in the memory.
https://www.wunderground.com/personal-w ... UNITEDK203
Top

The ones I remember from childhood are CB and BV for Blackburn. When JC Bamford was making his diggers in the Northrop factory at Blackburn he bought up JCB registrations.

Ian, that's a beautiful motorcycle and I hope it goes to a good owner. Anyone who buys it will have a fantastic machine. How weird to think that so many of the cars that I drove in my early days had smaller engines than your bike!
Nullius in verba: On the word of no one (Motto of the Royal Society)
Top

That reminds me of the day I had an American guest in the Land Rover Safari and as we were going up a steep hill he enquired about the engine size, considered my reply and said "I have a ride-on lawn mower at home with a bigger engine than that!"
My old Bedford TK wagon had an engine that gave 90hp on a good day and I loaded it frequently to the 14 ton maximum allowed. My last wagon ran at 32 tons (often a bit more than that) and the Gardner 6LX engine gave exactly 150hp. Work out the power to weight ratios for yourself and then marvel how we ever managed to get our jobs done
Stanley Challenger Graham
Stanley's View
scg1936 at talktalk.net