After not posting for two years I've just had a review of my quest to find a couple of points on the ancient account of the Whalley Abbey boundaries. To review, the line came through "The crooked oak at Admergill" which is long gone but seemed to be a point on the moor near to the Moorcock pub. This would need to have a view of the next point which is "Head of Benerker", due east and needing to be visible. A modern spelling might be "Burnacre" and since last time I've seen on an old map, approx. 1900, that the land sloping up to the top of Bleara Moor from the Earby side was indeed called ACRES but isn't named so on the modern map making the top of that hill the prime candidate for Head of Bernerker.
I did speculate that before but couldn't explain why but finding Acres helps the argument and to back it up we have Heads Lane making a beeline for the top of the moor from Kelbrook. So far so good.
The line now went due south to Poundscaghead before continuing on that line to Bernesetknarrs, almost certainly Barnside at Knarrs. So our Poundscaghead must be on that line which, probably not by coincidence, follows ancient parish and county boundaries through the area of Tom Cross which is an ancient marker point, so I'm told, and in all probability is the lost point. Exactly why it was so named, I certainly can't guess as it's lost in the mists of time.
I hope this is of interest to all of you that have been lying in bed pondering the puzzle for the last two years but I'd appreciate any more info that might clear up the origin of that last name.
Cheers and best wishes to all.
Top

Hello again JP, I know I've mentioned it before but the whole area between Burnt Hill and Barnside was once known as Shawhead, it seems to me that your Poundscaghead could easily have become Shawhead. A simple thought i know but the current Lancashire boundary goes "round" Shawhead, I tend to favour someone getting their rounds and pounds confused!

Torentun, Eurebi & Chelbroc (Thornton, Earby & Kelbrook) are all mentioned in the Domesday Book as part of Craven, so I'm reluctant to let you include Bleara within the Whalley Abbey boundary as it would take a chunk out of the ancient parish of Thornton in Craven.
I've just been checking my maps and found the "Acres" you mentioned on the 1896 6" OS map. Underneath is the number 5436.780, and directly above it says Thornton in Craven, so I believe it to be the acreage of the parish. Sorry!
https://www.wunderground.com/personal-w ... UNITEDK203
Top 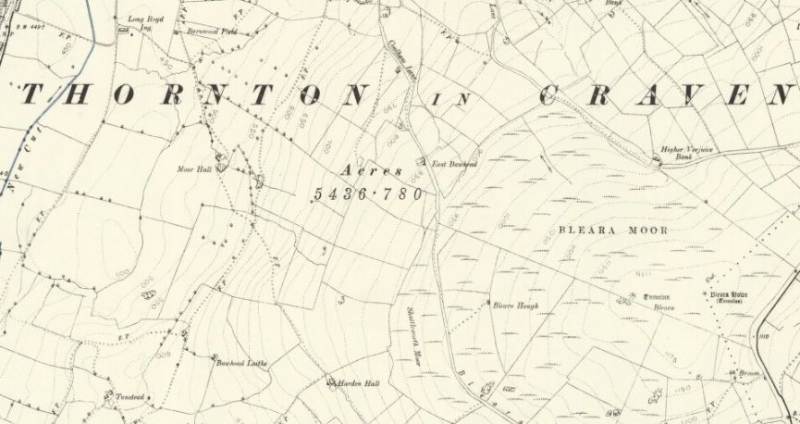 I concocted today's theory as I studied an old map and saw ACRES, but I had speculated The top of Bleara before as it is a prominent site with archaeological remains, Also, our experts in the derivation of old words and language suggested that burnacre denoted moorland ie the head or top of the moorland. It certainly fits the direction of due east, from Admergill, and then due south to Poundscaghead. The last one is in your backyard so I'll leave you to dig further.
Top

The thing that strikes me is that Moorcock to Bleara is a hell of a long leg in a boundary description particularly as there is a well attested marker stone which still exists at Standing Stone Gate.
I like your mis-transcription theory Wendy. So many times they lead us astray.....
Stanley Challenger Graham
Stanley's View
scg1936 at talktalk.net

If you can see Bleara Moor summit from a high point on the moor behind the Moorcock then that may have been sufficient for the purpose of knowing where the boundary line ran. A part of that Moorcock hillside is, or was, known as One Tree Hill. I've only just resurrected my interest so havn't been up there for 12 months or so and I'll try to check the sight line. Directions given ie east, due south etc fit the positions from and to known spots with only the two unknowns between them. I'm still struggling with the word POUND in the last unknown point, perhaps it meant just that ie a pound (enclosure) at SCAGHEAD (Shawhead) which is a place very close by. The bounds were, of course, laid down 800 years ago and things move and evolve.
Top

The top end of Admergill is pretty fixed as is Knarrs (Barnside ? ) , directions to and names are given for the intermediate two lost points. We must be able to locate them !!!

From Wolf Stones, which is the top of a craggy hill, the next point was Waterscheddles Cross.
Top

It just doesn't make any sense!

Easiest way without using the Gallery is to add it to your post as an attachment. Click the attachment tab below the post editor, click on add files and select your image. When it has uploaded you can select it and place it in your post at the cursor position.

The boundary between the Parish of St Michael at Gill Kirk and Whalley was the Black Dyke until de Lacey made his mistake and put it further west annexing Admergill.... From Blacko Tower the Barlick Parish boundary follows the Black Brook (County Brook) via the marker at Standing Stone Gate.
Stanley Challenger Graham
Stanley's View
scg1936 at talktalk.net

There doesn't seem to me to be any way that the boundary could head east bordering Barnoldswick and then go south bordering Thornton in Craven except for a very short section. If the boundary somehow went to Bleara then it would have been heading north east on its border with Thornton before turning south bordering Carleton.
The only way I can see the description working is if the head of Berneker is the point marked by the Tom Cross on Burnt Hill and Thornton in Craven extended beyond its current boundaries into Carleton Parish. I have seen Hawshaw mentioned as being part of the parish in the past.
I think it's possible that the rocky outcrop of Knarrs Hill would have made a good boundary marker, it is north of Barnside but part of the estate.
https://www.wunderground.com/personal-w ... UNITEDK203
Top

I've tried really hard to follow this thread, but must finally admit defeat.
I think it's time to call Mornington Crescent.

Just to muddy the waters a bit more look at THIS and open up Dr King's thesis......
Stanley Challenger Graham
Stanley's View
scg1936 at talktalk.net

I think I've found how to attach a document so here goes. If this works I''ll attach a modern map version

Why is it not working ? I've tried to add an attachment, I've submitted it and where's it gone ? I can't see a post doctor as advised above so now what do I do
Top

Wendyf wrote: ↑12 May 2017, 14:53 Hello again JP, I know I've mentioned it before but the whole area between Burnt Hill and Barnside was once known as Shawhead, it seems to me that your Poundscaghead could easily have become Shawhead. A simple thought i know but the current Lancashire boundary goes "round" Shawhead, I tend to favour someone getting their rounds and pounds confused!

What about "bounds" instead of rounds or pounds ? The bounds at Shawhead ?
Top

Why is it not working ? I've tried to add an attachment, I've submitted it and where's it gone ? I can't see a post doctor as advised above so now what do I do

There are no files attached to your post JP.

This isn't about the Whalley Abbey Boundary but perhaps it's relevant to the topic. I like to think that the top of Burnt Hill with its position on the Yorks/Lancs border and meeting point of 4 parishes at Tom Cross was an important place in times gone by.
I've been searching for information on the turnpike road in the British Newspaper Archive and my search threw up this item from the Leeds Mercury in 1840. It's a rough description of the boundaries of West Yorkshire (without Craven?) for the purposes of rural policing but the start and finish point is Tom Cross.

Thanks - I read that with interest.

Forgive me, but I also read the other side about the Earl of Cardigan.
I may not pay attention to my detailed surroundings when out walking - as has been pointed out, but I miss very little on the board.

He was voted the most unpopular officer in the British Army in 1840 - quite an achievement as the competition must have been quite stiff. Check him out on wikipedia - Earl of Cardigan

How Britain missed a revolution I don't know. He alone would have been worth the effort.

Like you David I started reading about Cardigan. I was aware of his unpopularity but I shame to say was not aware of Tom Cross. Give us an OS reference Wendy?
Stanley Challenger Graham
Stanley's View
scg1936 at talktalk.net

This old map shows it clearly. Sadly the stone is no longer there.

20201005_065648.png
Note that the Howshay Bar turnpike was in Yorkshire, but there was a chain bar in Lancashire outside the pub called the Black Lane Ends Bar.
Here's the Lancashire side of the border. Easy to forget that Warley Wise Lane down to Cowling Hill was the original Blackburn to Addingham Turnpike before the road over the Moss was constructed.
20201005_075104.png
You do not have the required permissions to view the files attached to this post.
https://www.wunderground.com/personal-w ... UNITEDK203
Top

Thanks Wendy. We have a match over here of course, the Standing Stone at 880429 behind Stanistone Gate Bungalow. It was still there the last time I looked. Yorkshire collides with Lancashire yet again. 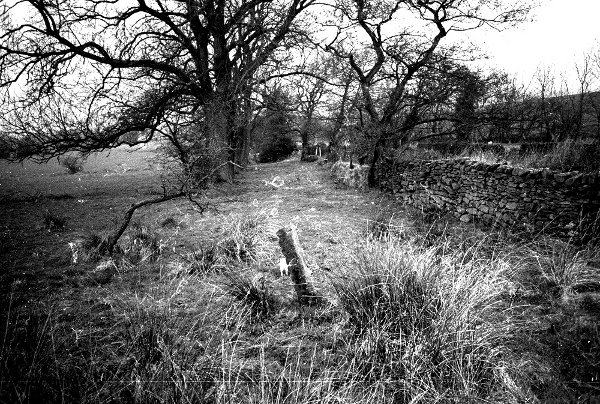 Originally it stood at the side of the road but that was diverted in 1840 when the canal company built Whitemoor Reservoir. You can still see the old road bed beyond the stone.
Stanley Challenger Graham
Stanley's View
scg1936 at talktalk.net