I want to redress the balance a bit. My mother was not 'church' but 'chapel'. This isn't something you hear about too much these days but 80 years ago it was an important distinction. It signified that she was non-conformist, a blanket term covering all those who didn't worship in the Church of England as it used to be called. So I am sure she would approve of me looking at one important aspect of Dissent in Barlick.
When Charles II took the throne of England on the 29th of May 1660 one of his chief aims was to calm the divisions thrown up by the Civil War by standardising Christian worship. In 1662 an Act of Uniformity was passed which laid out the way worship was to be conducted in the established church. This did not go down well with some clergymen and 2,000 of them refused to take the oath and were expelled from the church. Although there had already been ministers outside the established church, this created the concept of non-conformity. It was known as the Great Ejection of 1662. Many of these preachers and their followers went underground and worshipped secretly. In 1662 Barlick already had an illegal Baptist Church that had started with open air preaching but by then had started worshipping in a barn backing onto some land called The Parrock in Wapping. Incidentally this open air preaching was one of the reasons why, for many years, the early Baptists didn't have singing or music in their chapels. Apart from some religious grounds they had to keep the noise down while they were worshipping outside as government spies were constantly looking for them and singing would have been a dead giveaway. In 1688 the Toleration Act allowed certain dissenters places and freedom to worship, provided they subscribed to an oath. Meeting places which had previously been illegal had to be registered and the Walmsgate barn was one of the first under the Act. Over the years they bought the barn and adjacent cottages and the land behind, The Parrock. In 1797 they built a chapel on the site and that is the building we still have today but no longer a chapel.
In 1844 a new pastor, Thomas Bennett, was appointed to the Walmsgate Chapel and under his leadership, and with the benefit of help from Miss Ann Mitchell, a descendant of one of the earliest founders of the congregation, who for the token payment of £7 sold the Trustees land at the bottom of Manchester Road, a new Bethesda Chapel was built with an adjacent burial ground and opened in 1852. It was demolished in 1977 and David Crossley House was built. This David Crossley was one of the congregation's longest serving pastors. You might wonder why his name was chosen and not that of Thomas Bennett. Thereby hangs a tale and not always a pleasant one. I shall tell you what I have discovered next week! 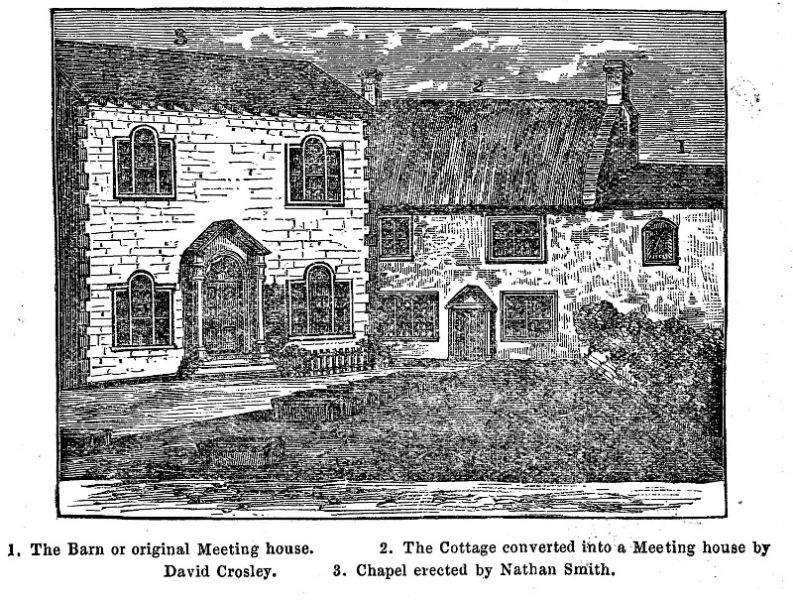 The Walmsgate Chapel as shown in the Rev Lewis's history of the Baptists.
Stanley Challenger Graham
Stanley's View
scg1936 at talktalk.net

Recent picture of the Chapel. 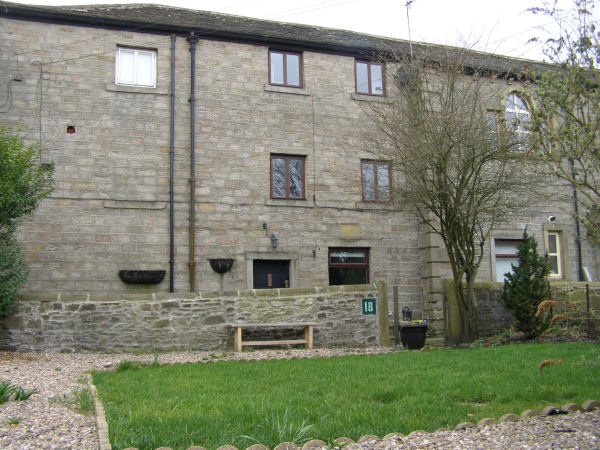 The plaque now totally obliterated. Any ideas what it said? 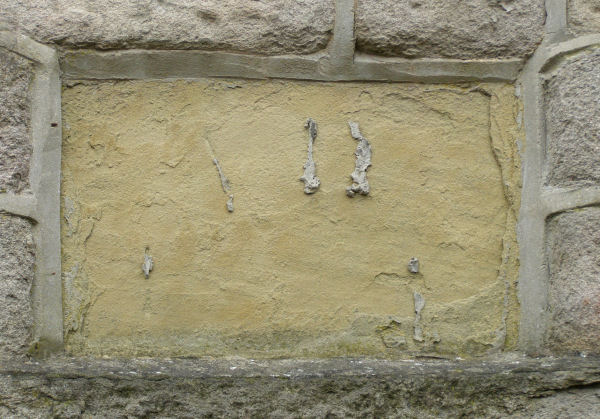 That was the last extension and I have an idea your best bet is to look in the 'History of the Baptists in Barnoldswick' in Rare Texts on the site. The author is Lewis. It almost certainly commemorates the date of the build....
Stanley Challenger Graham
Stanley's View
scg1936 at talktalk.net

Baptist Chapel plaque. Nothing so far on the extension date stone. 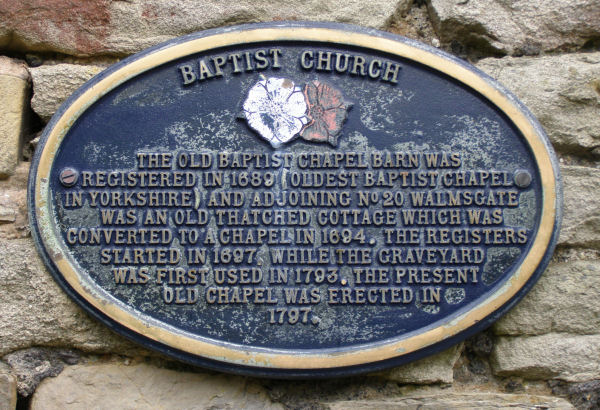 Nothing in Lewis. Without spending too much time this looks like the best bet. The chapel extension pre-dates 'The Ship' so the date could be 1892.
Town / Index no : Barnoldswick - BWK.BM.01

It's all complicated by the Schism P. I go into that and give some chronology in the next article.
Stanley Challenger Graham
Stanley's View
scg1936 at talktalk.net