Spirograph (1965). Invented by Bruno Abakanowicz and developed by British engineer Denys Fisher.
Spirograph hit the best sellers list in 2014.
It was a lot of fun, especially when you were also given a lot of different coloured pens to make-up the designs with.
I noticed a small one in a local toy store today, designed for children to use while travelling in the car.
It was nice to see that you can still buy lots of old-style painted wooden educational type toys , like shape sorters, ie fruits, numbers and animal shapes etc. I think we all had those.
I know I'm in my own little world, but it's OK... they know me here.

Ah! Spirograph! The kids had one and I used to play with it. It was playing with his grand daughter's Spirograph that triggered Johnny Pickles into having a stab at Ornamental Turning, he had already built the lathes.
I love the Scandinavian wooden toys usually operated by pulling a string..... Have you seen the one that looks like a table tennis bat with chickens pecking at it when you swing the ball round that hangs underneath it?
Stanley Challenger Graham
Stanley's View
scg1936 at talktalk.net

No I haven't seen that one Stanley, sounds like fun.
In our Adelaide Hills we have www.thetoyfactory.com.au. They make lots of wooden toys and puzzles, and have lots of activities for kids. Also the worlds biggest rocking horse that you can actually climb.
I know I'm in my own little world, but it's OK... they know me here. 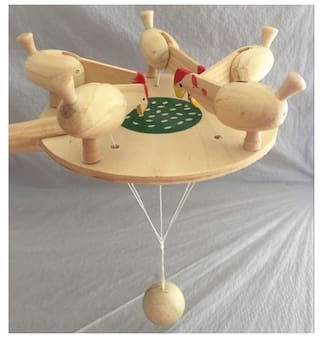 I used to have a savings bank. A tin replica of a building and I have an idea they were given away by my dad's bank..... Only the bank could open them.
Stanley Challenger Graham
Stanley's View
scg1936 at talktalk.net

Why did we collect rose hips during the war ?
Top

Weren't the Rose Hips for syrup, considered a valuable health food for kids?

On the savings bank front. I still have a round one issued by the Yorkshire Penny Bank. It is date stamped by the manufacturer on a brass plaque on the top. "The Ohio Safe Company" 1935. They fetch about £30 on Ebay. I'm keeping mine, it has slots around the circumference for 1d, 3d, 6d, 1s, 2s and 2/6d. I think it has about five bob and a few coppers in or thereabouts.

During the war we were taken out occasionally from school to collect hips from the hedgerows. Wendy is right, good source of Vitamin C. We got rose hip syrup free when it was available at the clinics we attended regularly.
We were also taken out to pick potatoes up after the spinner had exposed them in the field. I think the reasoning was that kids didn't have to bend down as far!
Stanley Challenger Graham
Stanley's View
scg1936 at talktalk.net

The benefits of saving were instilled at an early age at Gisburn Road Infants and Primary. To compliment the home savings bank, the school operated a banking collection service on behalf of the Yorkshire Penny Bank. Subscribers were issued with both a small red woven paper backed bank book and a bigger hard backed Blue one. Deposits were collected on a Monday morning and the teacher entered them in the red bank book. You could deposit anything from a penny upwards, my dad used to give me a shilling each week. When the money in your red book reached £1 you took both books up to the bank and the teller there transferred the money into the blue book, this normally coincided with emptying the savings bank as well which also went into the blue bank book. Depending on thrift you could accrue a tidy sum for a little lad to take on his holidays.

I'm afraid I wasn't as thrifty Ian. I spent my 3d a week on sweets!
Stanley Challenger Graham
Stanley's View
scg1936 at talktalk.net

I can attest that whatever this little lad had accrued throughout the year to take on holiday usually burnt a hole in his pocket fairly rapidly once at the seaside. I can't remember ever coming home with any spare.

Whyperion
Senior Member
Posts: 1837
Joined: 23 Jan 2012, 22:13
Location: Stockport, after some time in Burnley , After leaving Barnoldswick , except when I am in London

I think I lost, or broke , my piggy bank, it was not a pig, but a plasic red and orange elephant, with a turn wheel in it that could be rotated to show a label in an open window for what you were saving for, I think I had it permanently set to 'Holidays'. I put 1/3rd of pocket money into that, 1/3 was for spending, and 1/3 into a large pig that I think still has a number of 1ds in to this day that I would clear out for buying the odd toy. Most toys came from relatives often bought on holiday. When decimalisation came I sort of gave up in that way , and pocket money came more in the form of things. Sometimes I bought comics from my spending money, I dont really recall buying sweets other than from daily dinner money allowance when at school, generally though mum bought additional comics, books (ladybird series generally , some Deans Blyton ones and some Knight series paperbacks- I suppose I could have used the library but that was a long walk away). Sometimes I bought small presents for family members - mainly Devon Violets waters and similar for my nan when on holiday. I also got money I could save on Post Office Savings Stamps in a book form that could then be exchanged for National Savings Savings Certificates , the early ones were quite decorative. Both savings methods I think did not really keep up with general inflation rates though, I dont think Dad had a savings account, and mum probably put a bit of housekeeping away for the holidays and christmas.
Top

My first wage almost 80 years ago was £1 a week and my keep. 10 bob on Woodbines and beer, 10 bob into the POSB. I had that account all through the army as well and funny thing is I can never remember ever drawing any of it out. Mind you, it's a long time ago even for me.
Stanley Challenger Graham
Stanley's View
scg1936 at talktalk.net

Earning a wage and smoking Woodbines at 4 years old Stanley?

All right, almost seventy years ago! Actually I was pinching half smoked fags off my dad when I was about 6 years old. It was seen as amusing in those days. Times were different Wendy.
Stanley Challenger Graham
Stanley's View
scg1936 at talktalk.net

I remember playing an arcade machine similar to this one on the seafront at Silloth in the 1960's when I was a kid and being able to win a cigarette if the ball landed in a particular slot. I don't think it would be allowed nowadays..!

[image][/image]
You do not have the required permissions to view the files attached to this post.
The grass isn't necessarily any greener on the other side
...sometimes it's just the flowers are in different places.
Top

Nice to see you posting Pete! Yes, I remember those as well at the end of the war.
Another memory is that even during the war the tall thin chocolate bar machines that took a penny were never taken off railway platforms. I always gave the slide a pull just in case!
Stanley Challenger Graham
Stanley's View
scg1936 at talktalk.net

I rather fancied having a 'penny slot machine' and the ones on 'Bargain Hunt' were about £200 'ish - so just about within reach. Now they seem to be in the region of £600- £800 which is quite another matter.

I find that Allwin are still making machines of all types. They even do ones that dispense chocolate bars for prizes.

I always wanted a pinball machine, readily available of course but quite expensive. Would love one of the old 1930's /40's bingo pinballs where you had to get the balls down holes on the board to complete lines or 4 corners on the backboard. No flippers but you could nudge but they still had tilt mechanisms. They had a few at the Tomato Dip and we played them for free coffee's and chip butties.

I hold the record for the highest score on the former Seven Stars Pub pinball machine in Barlick that used to be in the tap room. We played each week for a gallon of beer for the best score. 6d a play or a bob for three goes. I had to get Eric the landlord to watch me take it round the clock with over a million on the scoreboard. I got 99 replays in the process (only a two digit counter), it took 5 hours to rack up the score. Eric honoured the deal with a gallon of beer for our bunch each week for a month. 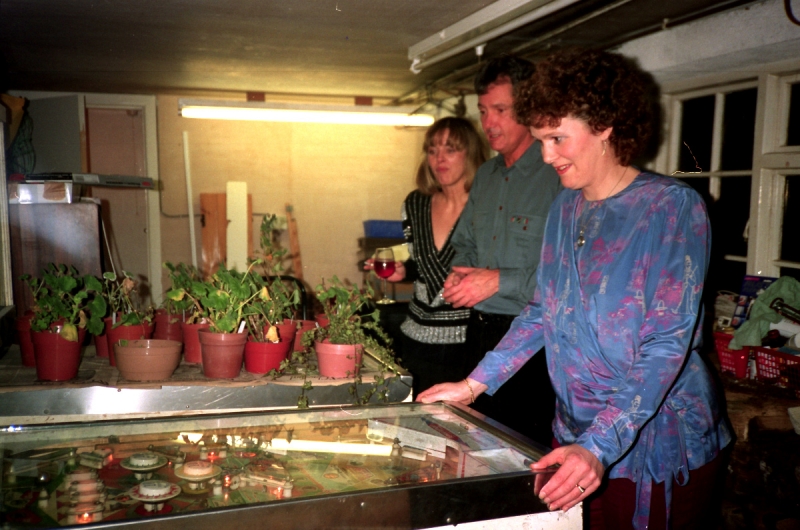 My mate Bob had two in his cellar, one of them in full working condition. Here are Sue and Bob watching Mary playing on it in 1987. Always a highlight at his parties....
Stanley Challenger Graham
Stanley's View
scg1936 at talktalk.net

The penny arcades at the seaside were the go-to destination if it rained! Now every child has one in their hands in the shape of a mobile phone! I suspect ours were less expensive.....
Stanley Challenger Graham
Stanley's View
scg1936 at talktalk.net

Weather permitting, as a child 1947ish, the Easter walk was down to see Jack Moore's monkey at Pendle Bottoms. Quite a walk for a youngster along Pendle Waters of about 4 miles outward. Homeward was shortened when we got the bus from Burnley Cattle market back home to Rosegrove. The real treat came with an ice cream at the Tea Gardens after viewing the monkey. Roger Frost talks about Jewel Mill being along Holme Road Jewel Mill To be honest I can't remember an old Mill but how could an old building compete with a Monkey and the prospects of an ice cream.
Top

Being naturally curious I checked this out - jack Moore's monkey

Similar board to our own, and two posters who are known to me. Mel - formerly of this parish, and Rex Watson who I have visited , and greatly enjoyed speaking to, to buy some 19th C books from.

(some shocking grammar there!)

Small world - six degrees of separation and all that.