Yes, P the former ILP Institute, now Unity Hall was in a right state before the Town Council took it on. The cafe facilities in there are excellent and the refurbishment has done wonders for it's continued use. When I was first involved with the Labour Party we used to have our Pendle CLP AGM and conference there.

On the Google thing Tiz, we are victims of generalisation for the category tags they apply, they can't actually get their heads round how we operate the house.
Ian
Top 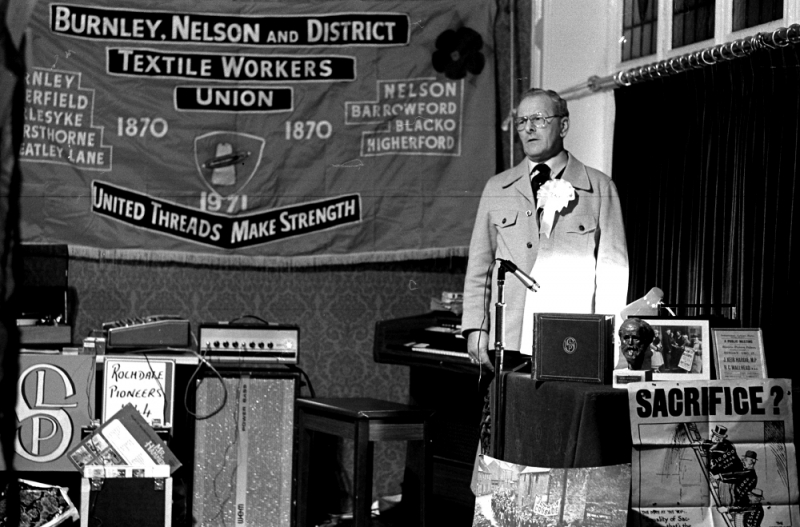 This image of Len Dole at the Labour Gala in 1978 fits here I think. I have an idea this was held in what was then Norway House. All part of a great socialist tradition and I am glad the Council have the funding.
The principles that drove all of them seem simplistic today but were the bedrock of the social improvements which are being slowly whittled away by the Right in these enlightened days. Think Cooperation, Conscientious Objectors and a Labour mayor in the 1930s who, when criticised by the Tories for running a soup kitchen for the unemployed successfully defended his position by saying it came out to the Mayoral Hospitality Fund.

I went digging. Here's the sacrifice cartoon in the image above. Just as applicable today. 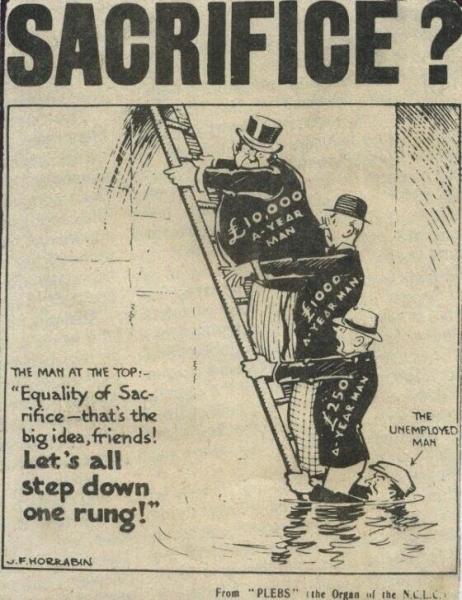 Unfortunately the cartoon still hits the nail on the head.

Whyperion
Senior Member
Posts: 2596
Joined: 23 Jan 2012, 22:13
Location: Stockport, after some time in Burnley , After leaving Barnoldswick , except when I am in London

To some extent The Co-Operative movement, while socialist in a theoretical principle , has more been a 'middle -class' system run by traders and the middling clerks and similar rather than a wide workers activity. The working classes for their shopping, have tended to in the 60s and 70s identify more with Tesco, with of late the likes of Aldi/Lidl have assumed a notionally cheap groceries outlet ( though I note that part of the co-operatives was as much about standards of quality as an overall price ). Will though a mass generation return to Co-operative principles or have some of the mis-running and financing taint the idea too much at the retail and production levels ?
Top

Owing to the current Coronovirus outbreak, and in line with current advice the ILP Land Society committee have taken the decision to temporarily close Clarion House. This is to both protect our Sunday visitors and the voluntary members of our brewing up teams. We will obviously monitor the situation and re-open the House when it is deemed safe to do so.
Ian
Top

Sensible I suppose under present day circumstances. I wonder if previous generations would have done the same?
Stanley Challenger Graham
Stanley's View
scg1936 at talktalk.net

Clarion House remained open throughout the depression and acted as a soup kitchen to give hot meal to those in need. This is a different situation entirely. A good proportion of our visitors are in the "at risk" age group although many still walk and cycle to the house. Our brewing team volunteers are in a similar bracket so it is the most sensible thing to do. We do not want to be the cause of any unintentional spreading of the virus.
Ian
Top

Clarion House has been open for the last few months for takeaways. I.E. no internal use of the building. Orders have been taken and brews have been vended at the side door. All recommended covid safety measures have been in place including a signing in book for the volunteers, hand sanitisers, distancing rules, washing up facilities, clean down rules for the kitchen before opening and closing Access has been given for disabled visitors to our inside toilet facilities.

We are having an ILP Land Society meeting today after closing time at 4pm so we will be popping over to do the business. We will be discussing the way forward and probably how to utilise our restart grant from the council to best advantage for the house.
Ian
Top

Good to hear Ian. Let us know what the plans are.....
Stanley Challenger Graham
Stanley's View
scg1936 at talktalk.net