Let’s set the scene. The process of dissolving the monasteries is going ahead and gathering pace. Our part of the country is seen as backward and wild by London and the majority of the inhabitants still cling to the old religion and the supremacy of the Pope, they are angry because they feel he has been betrayed. Factor in the role of the monasteries as religious leaders, providers of charity and in many cases the saviours of the poor hard hit by disease, hunger and bad harvests. We have also seen that in the case of the Corrodians, they also acted as end of life care if you could afford it. Closing them down, seizing the assets and dispersing the monks was deeply unpopular at all levels of society. It didn’t help that the closures dealt with by the Duchy were very harshly treated, far worse than Cromwell’s Court of Augmentation visitors. Add to this the fact that as monastic lands were quickly leased or sold off to local capital holders they tended to enclose commons, enforce boundaries and remove what had been common rights to use the land. All this was fertile ground for trouble.
In June 1535 there was a riot by about 300 people in Craven, they pulled down dykes and hedges in Giggleswick. 82 men were indicted and 18 imprisoned after trial. Parliament put responsibility for this on the greed of the gentry but there is little doubt that a contributing factor was the closure of monasteries, especially the smaller houses.
There was a further bone of contention, in general, in this area, the people were against the King’s move to divorce his wife Katherine and install Ann Boleyn as Queen. This was seen as an attack on the old religion and as time passed and the rebellion (as it had then become) spread South into Lancashire it became more important than the economic factors. In 1536 when the Pilgrimage of Grace was at its height, priests were preaching that ‘Peter’s Pence’, the tithe that the Pope took from the church, should still be paid to Rome in defiance of the Supremacy. This was treason. Some of the monasteries even had armed forces. In 1537 when Furness Abbey was visited and surveyed it was found that it had 400 horsemen and 458 foot soldiers on its possessions in Lancashire, Cumberland and Yorkshire.
It would be a mistake to jump to the conclusion that the motives of the rebels were entirely religious or economic. Quite wealthy families supported the movement and in some cases even swore the Pilgrimage Oath. It would seem that many felt threatened by the changes in the religious and social order which started in the 1530s. The new versions of religion like Protestantism and even the reformed Church of England under Henry’s Supremacy eroded values they had been reared with since childhood. The new values and closures of monastic houses were disrupting the social fabric. All they could do was fight. 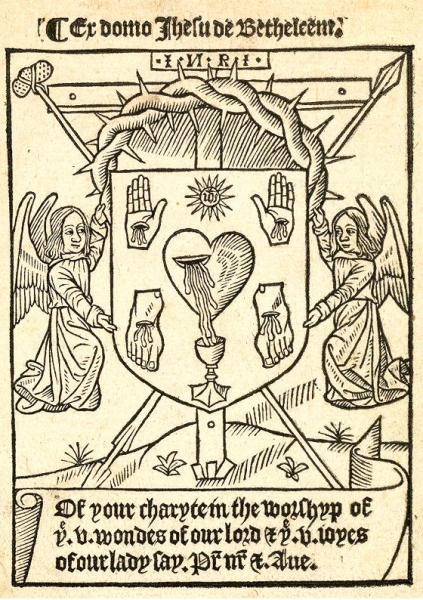 This image of the Sacred Heart was used on banners during the Pilgrimage.
Stanley Challenger Graham
Stanley's View
scg1936 at talktalk.net

Looking forward to the series Comrade. Nolic
"I'm a self made man who worships his creator."

Whyperion
Senior Member
Posts: 1762
Joined: 23 Jan 2012, 22:13
Location: Stockport, after some time in Burnley , After leaving Barnoldswick , except when I am in London

Its a bit of history I dont know the detail of. I know that places like Townley in Burnley stayed Catholic as best they could, dont forget it was the immortal soul's destination that was at stake, quite how much Henry VIII would have been aware of this I don't know- the support and justification of those against Rome influence was the corruption of Rome and its systems. I know of another manor house in Suffolk where the family secretly stayed loyal to Catholicism - with Preists Holes and Stained Glass with hidden allegories - the building last I knew of it had become an inter-denominational retreat and conference centre.

My historically local priory was long identfied as being one of suppression of its field agricultural workers and demanding tribute and tithes that were seen as oppressive and the locals were happy to see the demise of it.
Top

Mail from George Ingle informing me that Broughton Hall still has a Catholic chapel and a priest. George knows because friends of his are getting married there.
Stanley Challenger Graham
Stanley's View
scg1936 at talktalk.net

Stanley wrote: ↑
05 May 2019, 03:03
Mail from George Ingle informing me that Broughton Hall still has a Catholic chapel and a priest. George knows because friends of his are getting married there.

Henry VIII remained largely traditional and catholic (small c ) in his personal worship. Th destruction of the monasteries and the break from Rome were done to aid his finances and his marriage to Anne Bolyen. Thomas Cromwell was more revolutionary in his pusuit of the Protestant religion and it was his zeal that carried the destruction through the monasteries and into the smaller churches with altars, decorations and glass destroyed. This probably had a greater impact on local towns and villages and gave rise to more ill feeling than the plunder of the larger monasteries. Nolic
"I'm a self made man who worships his creator."