It’s always nice to find that you are in front of the curve. 15 years ago I wrote an article on mixed farming for ‘The Food Magazine’ and it was very well received. In case you hadn’t noticed, mixed farming has risen from the grave and is now a hot topic in farming circles. The great thing about it is that it looks after the land and constantly improves it. The key thing about old fashioned mixed farming was that it incorporated animal husbandry with arable farming, feeding a proportion of the crops raised to the animals and spreading the resulting dung, mixed with straw, back on the land where it stimulates worm activity which aerates the soil as the busy little creatures drag the manure down deep in the ground. Notice that this assumes that animals are kept indoors in winter bedded down on straw which has to be bought in as we don’t grow cereals round here. This importing of straw means that the fertility locked up in it is being added to the soil and this makes up for the crops and meat exported off the farm. It is all based on the fact that you put more back in than you take out and over the years this increases the productivity of the land.
So far so good, I think that even a layman who knows nothing about farming can see the basic logic of this. However, of late we have seen the rise of an increasing amount of chatter on social media about the ‘cruelty’ of keeping animals captive and even forecasts that the methane they produce is adding to global warming and the obvious conclusion is that we should stop eating meat. ‘Obvious’ perhaps but of course hopelessly impractical in terms of working with Nature and farming efficiently and responsibly. It’s noticeable that the tone of this debate is becoming increasingly strident and that farmers and ‘industrial farming’ are being targeted directly making many of them feel as though they are the bad guys. I deplore this trend. Become a vegetarian or vegan if that’s your bag but don’t attack everyone else as being wrong.
There is more. One aspect of veganism in particular that worries nutritionists is that a strict vegan diet is deficient in some vital elements. This is bad enough for adults, they would do well to investigate this and take supplements, but it is even worse if young children are reared on the same diet. Developing young bodies need the full range of nutrients provided by a mixed diet and any interference with this can have long term consequences. This is bad enough but add in the deficiencies that have been identified as a direct consequence of the growth of the ‘Just Eat’ generation and their reliance on prepared food of doubtful provenance. Fast food and ready meals may be convenient but they are not always as good as home cooked natural ingredients with no added ‘improvers’. There is more, next week I’ll continue on my hobby horse! 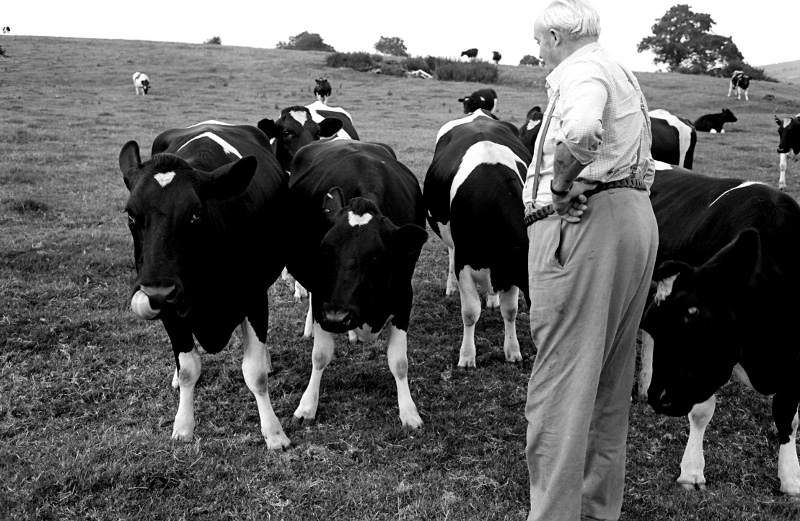 Is this really the culprit? A proud farmer with lovely beasts.
Stanley Challenger Graham
Stanley's View
scg1936 at talktalk.net